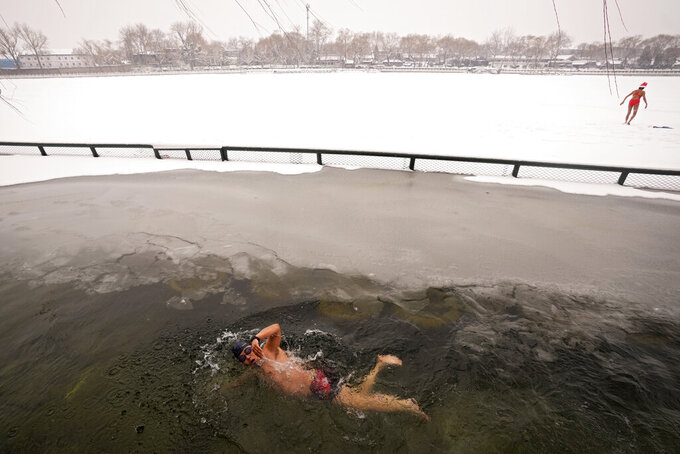 A man swims in the half-frozen water at the Shichahai Lake during a snow fall in Beijing, Sunday, Feb. 13, 2022. According to some of the local residents, swimming in the freezing water leads to health. (AP Photo/Andy Wong)

BEIJING (AP) — Sixty-year-old Chen Jieyu dove into the murky water of Houhai Lake, covered partially in a layer of ice and snow. Snowflakes were falling, and she had on just a regular red swimsuit, her arms and legs exposed. It was 21 degrees Fahrenheit (minus-6 degrees Celsius) outside.

As the Winter Olympics carry on just a short distance away inside the bubble, Beijing residents are enjoying their own traditional winter games by the lake situated in Xicheng district.

“Actually anyone can do it, anyone will be cold,” said Chen, who said their icy swims should also be considered a Winter Olympics event. “As you do winter swimming more and more, you'll feel like you can prevail over the cold.”

As she climbed out of the water, she beamed. She then grasped the hand of a young boy watching her swim. “Ah so cold!" he shrieked.

The swimmers from Beijing Houhai Happy Winter Swimming Team range in age from 20 to 90. Some come every day, rain or shine, smog or clear skies. During the winter, they get many curious onlookers, and their presence has become a quirk of the city, even as the older buildings of the hutongs have been leveled for new, taller apartment blocks.

“I go into the water every day, all four seasons in a year,” said Han Liyuan, a 72-year-old Beijing resident. Han has been showing up to swim at the lake for eight years.

It's not for the faint of heart, Han said. When he first dives in, he can't immediately breathe. His body needs to adjust to the shock.

In the icy waters, they keep their swims short. Even just one or two minutes at a time.

But as he has continued to swim over the years, he has learned to deal with the cold. And his physical health has gotten a boost.

"Now, if we're talking about walking, I can compete with a 20-or 30-year old, say, walking fifteen miles without resting.”