BEIJING SNAPSHOT: Together for a shared future, apart 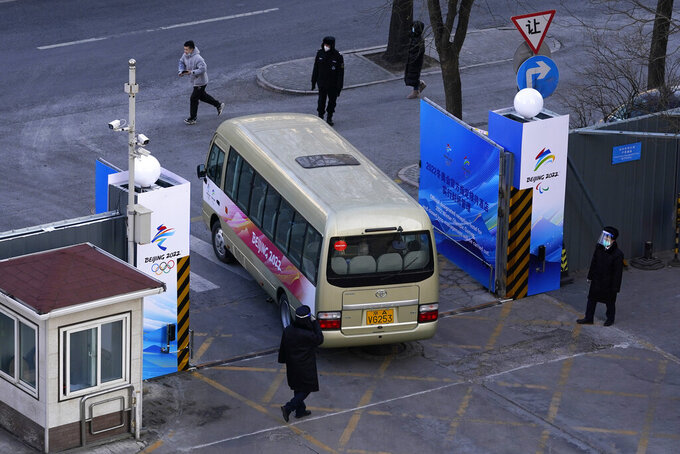 A bus is allowed through a security gate at a hotel inside the Olympic bubble at the 2022 Winter Olympics, Monday, Jan. 31, 2022, in Beijing. (AP Photo/Mark Humphrey)

BEIJING (AP) — The ever-present slogan that governs these Winter Olympics is meant to evoke the ideal of one world. In reality, it's two.

Bus shelters, buildings and the walls that form the membrane of the Olympic bubble all exhort: “Together for a shared future." But the Chinese residents waiting in front of these hoardings, bundled up against the frigid temperatures, are solidly out of the loop.

At the opening ceremony, International Olympic Committee President Thomas Bach declared that the mission of the Olympics rested in “always building bridges, never erecting walls.” Yet with ticket sales closed to the public — Beijing is inviting 150,000 spectators, a chunk of which will be “international friends” — the locals are nearly completely walled out of their Olympics figuratively and literally.

Of course, the bifurcation of Beijing is not a capricious plot to alienate its residents. It's driven by China's “zero COVID" strategy and is, at least in part, an attempt to keep those same residents safe. Underscoring the rallying cry of the Olympic slogan is the desire for international cooperation to surmount shared challenges — like the pandemic from which the bubble swelled — together, not a literal call for mingling.

As Olympic shuttles roll through the streets, the membrane erodes to its thinnest point, allowing glimpses of the curiosity and, often, boredom with which Beijing residents study the riders. But any apathy was shed for unmitigated delight Friday night as residents clustered on city streets and by the riverbank to catch sight of the fireworks emanating from a lit-up Bird's Nest during the opening ceremony — residents and interlopers united in wonder, if merely for a moment.