Beijing Voices: Seeking a stadium peek from outside bubble 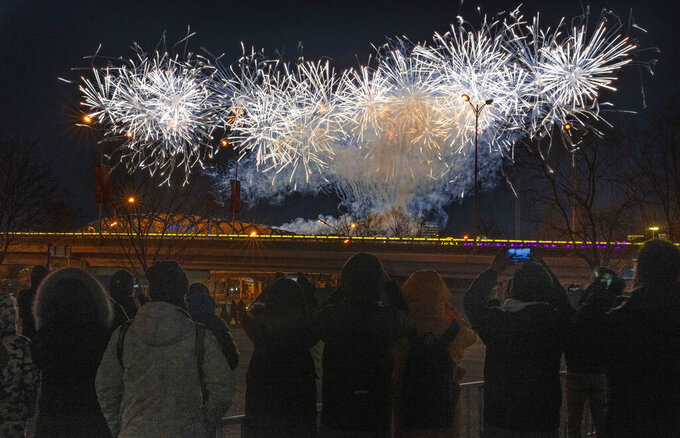 Children play as they wait in a neighbouring carpark to catch a glimpse of the fireworks for the opening ceremony of the 2022 Winter Olympics, Friday, Feb. 4, 2022, in Beijing. (AP Photo/Ng Han Guan)

BEIJING (AP) — Beijing residents gathered outside in droves on a below-freezing Friday night to try to get a glimpse of the lit-up Olympic stadium and the fireworks during the opening ceremony for the 2022 Winter Games.

Tickets are not being sold because of the pandemic, and only selected spectators are able to attend. About 150,000 people are expected to watch including winter sports enthusiasts, school children, marketing partners and foreign embassy staff.

The venues have been walled off as a COVID-19 prevention measure so that participants do not come into contact with the general public.

That didn't stop people from bundling up in coats and blankets, hoping for even a partial view of the Bird's Nest stadium from a kilometer (half a mile) or more away. Many live-streamed the scene on their mobile phones and waved at athletes passing by on buses carrying them into the closed-off stadium area for the ceremony.

“I wanted to see (the fireworks) in person," he said, sitting on a shared bike in an area where police moved the crowd back, obscuring their view further. "I saw a streak of blue smoke, but that’s good, that’s OK. It’s kind of an experience. I didn’t ask for too much.”

“It’s a rare opportunity to experience an Olympics year," he said, carrying his 7-year-old daughter on his shoulder. "I hope my daughter, as a little resident of this city, could have a deeper impression (of the Olympics), so I took her here and the atmosphere is very good. She could feel it in person.”

“Although the virus outbreaks in Beijing have not ended, our country can hold such a grand event, which made me reassured," the 23-year-old college student said. "I feel that we are very capable.”

"It’s Chinese New Year, so I came to see it with children, adding a more festive atmosphere,” said the 35-year-old car salesperson, who brought his daughter. He said he was accepting of the no-ticket policy. “After all, it is not easy for a country to organize such a big event. The general public should well understand that.”

“I hope to witness this rare moment," said Yan, who was in high school when Beijing hosted the Olympics in 2008. She has worked in the Chinese capital for a few years. "I think I’m lucky to be standing here. A lot of people who want to come probably wouldn’t be able to see the corner of the Bird’s Nest.”

“We got here two hours early and have been waiting for long. I parked my car out on the perimeter and walked over here," Zhou said. "My mood is quite excited, because it’s a once-in-a-century event for Beijing to host the Winter Olympics.”