Biathlete who collapsed at end of Olympic race heads home 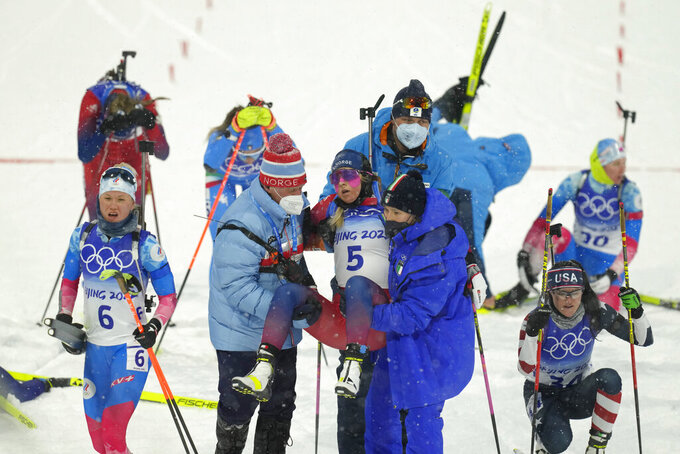 Ingrid Landmark Tandrevold of Norway is helped off the track after the women's 10-kilometer pursuit race at the 2022 Winter Olympics, Sunday, Feb. 13, 2022, in Zhangjiakou, China. (AP Photo/Kirsty Wigglesworth)

ZHANGJIAKOU, China (AP) — A Norwegian biathlete who collapsed after crossing the finish line in the women's 10-kilometer pursuit race will be heading home instead of competing again at the Beijing Olympics.

Ingrid Landmakr Tandrevold, who said Monday she has had heart issues in the past, was in position to win a medal at the end of Sunday's race but stalled as she approached the line and then fell to the ground after crossing it. She ended up finishing 14th.

Dropping to the ground at the end of a biathlon race is common for skiers who push themselves on the ski tracks and shooting range, but several other competitors noticed that Tandrevold appeared to be in trouble and alerted medical staff.

On Monday, Tandrevold said she is feeling better but is done with competing again this week.

“I just think I pushed my limits in the altitude and in a tough race, but since I’ve had issues with my heart earlier in my career, we need to be careful and we need to check it out further,” Tandrevold said. “I’m not allowed to compete more in these Olympics so I will go home to Norway.”

“We want to take her home and have her examined and see what we can do, and what we can help (with) so this is not happening again,” he said.

The 25-year-old Tandrevold said she hopes to have "many more years in this sport.”

Tandrevold was competing in her second Olympics for the powerhouse Norwegian squad. The team won the opening mixed relay race and teammate Marte Olsbu Roeiseland has won two individual gold and one bronze medal so far at the Beijing Games.

The Norwegians are favored to win another gold in Wednesday's team relay.

“There is nothing I want more than to compete in the relay with my teammates and the other girls and the best team," Tandrevold said, "but my health is more important.”