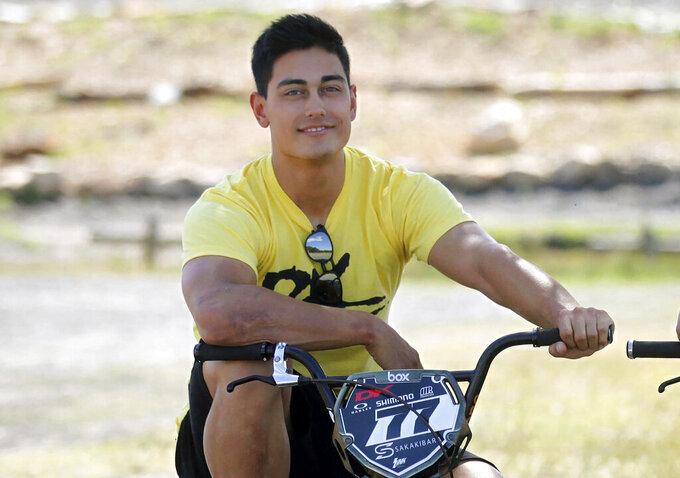 In this Nov. 12, 2019, photo, Australian BMX rider Kai Sakakibara rides a bike in the suburb of Sydney, Australia. Sakakibara, who grew up in Japan, has relocated from hospital to a rehabilitation center but his hopes of qualifying for the Olympics are over are his family was told to expect permanent disability after he suffered a traumatic brain injury. (Kyodo News via AP)

SYDNEY (AP) — Australian BMX rider Kai Sakakibara, who grew up in Japan, has relocated from hospital to a rehabilitation center but his hopes of qualifying for the Olympics are over are his family was told to expect permanent disability after he suffered a traumatic brain injury.

The 23-year-old Sakakibara needed surgery to relieve pressure on his brain after a crash in February at a World Cup event in Bathurst west of Sydney that left him unconscious and in intensive care.

Sakakibara, ranked among the world’s top 10 BMX riders in recent years, spent nearly eight weeks in a Canberra hospital. But with all surgery now completed, he has moved to the Brain Injury Rehabilitation Unit in western Sydney, where he is expected to remain for “many months.”

An update from the Sakakibara family on Friday said that in the last 10 days he’s progressed from pointing to ‘yes’ or ‘no’ on a piece of paper to speaking when asked simple questions.

But doctors have told the family he will have some permanent disability, with the trauma on the left side of his brain currently impacting his ability to speak and move the right side of his body.

“Kai continues to ‘emerge’ from the state of unconsciousness, and we are super excited to start communicating with him,” the family statement said. “However, as time progresses it becomes more and more evident that this has been a truly serious injury.”

They said Sakakibara has already made “solid improvements” in physiotherapy, occupational and speech therapy, while the facility had gone to great lengths to protect patients from the coronavirus.

“Kai has his phone and scrolls through social media every day, he ‘likes’ posts and tries to send text messages to friends but they are invariably scrambled,” the family said. ”“So, if you get a text from Kai don’t worry his account has not been hacked, he’s just trying to get in touch with people. Sometimes he gets annoyed and sometimes he just puts on that patient Kai smile and we move on.”

Sakakibara and his younger sister Saya were aiming to make their Olympic debuts in Japan, where he spent part of his childhood after being born on the Gold Coast south of Brisbane in Queensland state.

He began racing as a four-year-old, moving to Tokyo in 2000 and collecting multiple titles before returning to Australia in 2008.