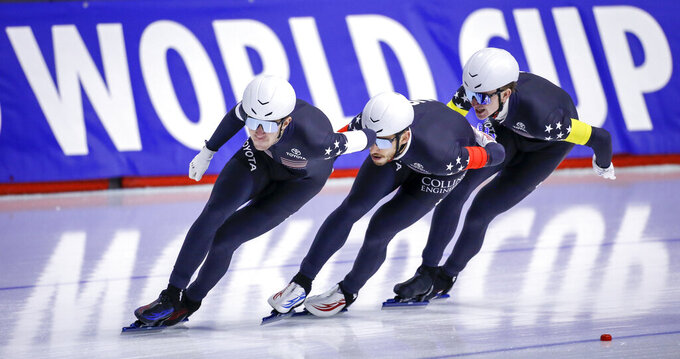 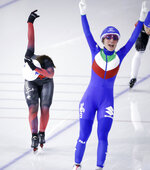 CALGARY, Alberta (AP) — Brittany Bowe of the United States won the women’s 1,500 meters at the World Cup speedskating meet in Canada, where the American men won the team pursuit on Sunday.

Bowe skated the distance in 1 minute, 52.05 seconds, edging Nana Takagi of Japan, who earned silver in 1:52.06 at the Calgary Olympic Oval.

“After seeing Nana’s time I just put it in my mind I was going to go for it," said Bowe, who was second in the 1,000 on Saturday. "I don’t feel bad taking that one after losing by a hair yesterday.”

The U.S. team of Ethan Cepuran, Emery Lehman and Casey Dawson set a track record of 3:35.59 in winning the team pursuit for the second straight World Cup.

Joey Mantia, who won the 1,500 on Saturday, didn't participate in the team pursuit in Canada, a week after the Americans set a world record in winning in Utah.

The U.S. men secured the World Cup trophy for the season.

“I don’t know if anybody was really expecting that,” Dawson said. “The team started in the B group at the first World Cup, so who knows?"

In the men's 500, Viktor Mushtakov of Russia took gold at 33.90 seconds. Yuma Murakami of Japan earned silver in 33.99. Laurent Dubreuil of Canada, who won the first 500 on Friday, finished third.

In the women's mass start, Francesca Lollobrigida of Italy concluded the best World Cup weekend of her career with a victory. She earned gold in 8:29.51.