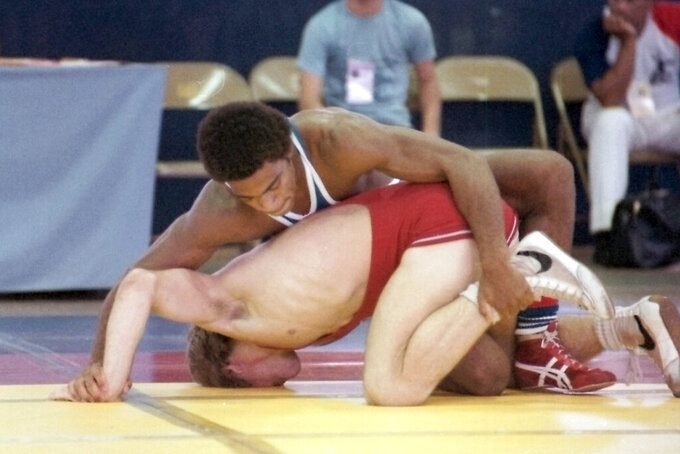 In this image provided by the U.S. Olympic and Paralympic Committee (USOPC), United States wrestler Lee Kemp, top, competes in the 1979 Pan American Games in San Juan, Puerto Rico. The U.S. boycott of the Moscow Olympics crushed Kemp's dreams, along with all the predictions that he would win a gold medal. (Walter Meives/USOPC via AP)

COLORADO SPRINGS, Colo. (AP) — Long before the days when most facts were a click away on the internet, Lee Kemp kept the details of his wrestling success to himself.

“I was embarrassed,” he said. “If you tell someone you were pretty good, the first thing they'd ask you is ‘Did you do it in the Olympics?’ If you said ‘No,’ they were like, ”Oh, OK."

Fact is, Kemp was very good. A two-time reigning world champion who was among the Americans viewed as a star in the making as the 1980 Olympics approached.

The U.S. boycott of the Moscow Games crushed all those predictions, along with Kemp's hopes. He was one of the handful of American medal hopefuls who not only didn't cash in at the '80 Games, but would never get another chance. In all, 227 members of the 1980 team would never compete at any Olympics.

“It felt like a death in the family, where that person is gone and never coming back,” Kemp said of his emotions when he heard the news the U.S. would boycott the Games in protest of the Soviet Union's invasion of Afghanistan.

Kemp's saga, poignantly told in a documentary “Wrestled Away: The Lee Kemp Story" is a timely bit of storytelling during this, the 40th anniversary of the boycott and a summer in which the 2020 Olympics have been postponed by the coronavirus pandemic that has turned the year's sports calendar upside down.

The 1980 boycott was similar to the 2020 postponement in at least two ways: It was totally out of the athletes' control, and the opportunities lost might never be fully accounted for.

“Lee thought when he got into wrestling, it was just him and the other person on the mat, and that race and politics wouldn't matter,” said Riley Hanlon, who produced the documentary and also a video that Kemp narrated in which he describes his journey. “I think the biggest takeaway about Lee is that he was able to persevere through so many different changing plans” throughout his life.

Retirement from wrestling, a few endorsement contracts and a good job — who wouldn't want to hire an Olympic gold medalist? — felt like realistic outcomes for a wrestler leaving the Olympics with a gold medal around his neck. Instead, Kemp stayed on the mat, and won another world championship in 1982, with his sights set on realizing his Olympic dream in Los Angeles in 1984.

He didn't qualify for the team, and though he's reluctant to make excuses, the fact that the Soviet Union had made its intentions clear — it would boycott the 1984 Games in Los Angeles in retaliation for what the U.S. had done — certainly played a part in Kemp's less-than-ideal encore.

“It helps your training when you know you're going to be going against he very best,” Kemp said. “Not to downplay any American who won in 1984. But you look at the typical Olympics, and we might have had one or two gold medalists in wrestling. In 1984, we had seven.”

Kemp focused on getting his MBA and making a steady climb in the business world. Some things worked out; others didn't. He had a fractured marriage and spent time in jail in the 2000s for violating a restraining order obtained by his ex-wife with whom he waged a bitter custody battle.

Those days have passed, as well. And these days, Kemp keeps his hand in the game, coaching MMA athletes and working with high school wrestlers. In 2008, Kemp finally did make it to a Games as part of the U.S. Olympic team; he helped coach gold medalist Henry Cejudo.

Forty years later, anyone who knows wrestling is well aware of how the path Kemp traveled was impacted by a decision he had nothing to do with.

“His legacy as one of the greatest wrestlers of all time and certainly one of greatest in the U.S. doesn’t exist because he was denied that opportunity to win an Olympic gold medal,” said Jim Scherr, the 1988 Olympic wrestler who said he worshipped Kemp growing up. "But everyone who knows the sport knows that barring injury, he would've won the Games.'