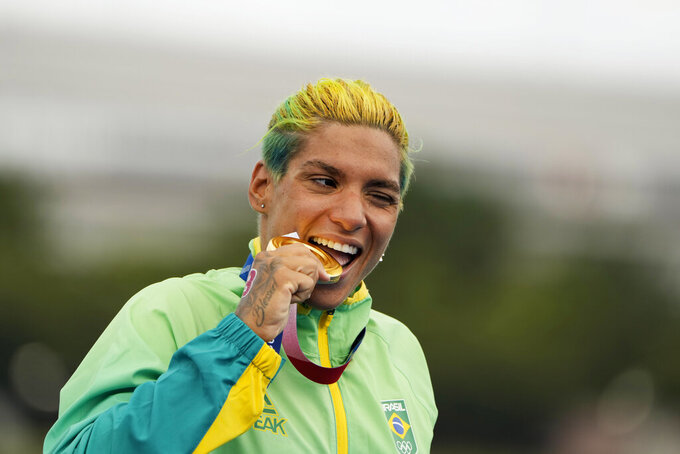 TOKYO (AP) — Dodging leaping fish in Tokyo Bay and pressure on the lead, Ana Marcela Cunha kept her cool and finally won at the Olympics on her third try.

Cunha finished nine-tenths of a second ahead of defending champion Sharon van Rouwendaal of the Netherlands. Van Rouwendaal took silver in 1:59.31.7.

Kareena Lee earned bronze in 1:59.32.5, giving Australia its first medal in marathon swimming. Lee got hit in the chest by one of the fish.

Neither the heat and humidity nor the marine life fazed Cunha. Quite a change from her first Olympics as a 16-year-old in Beijing.

She was dazzled by meeting Americans Michael Phelps and Kobe Bryant, along with star Brazilian swimmer Cesar Cielo, and finished 10th in the debut of marathon swimming. Cunha didn't qualify in 2012 and was 10th five years ago in Rio de Janeiro.

“We arrived here wanting, as much as you can, this medal,” she said. "I said to my coach to win this race will be very difficult for my opponents because I want it so hard, so much, and I’m really well-prepared.”

Cunha and Twichell traded the lead through the first five laps before the American dropped to fourth.

Leonie Beck of Germany moved into first ahead of Cunha on Lap 6, when the top eight swimmers broke away from the field. They swam in parallel groups of four, with the Brazilian soon taking over the lead for good and slapping the overhead timing device to clinch the gold.

“We are Latin people; we are hot, we are emotional people,” Cunha said, “so I had to be very cold mentally in the race to be focused. I knew I was prepared for that.”

Sporting green-and-yellow hair — two of the colors on the Brazilian flag — Cunha smiled and signaled No. 1 after getting out of the water.

After putting the medal around her neck, Cunha set down her bouquet on the podium and saluted the flag with her right hand. She later took a playful bite out of her medal.

Van Rouwendaal was among the top 10 before beginning her move on Lap 5. She worked her way into third behind Beck and Cunha, and outswam Lee on the final lap to secure silver.

“I had to be smart and I didn’t want to swim in front because as the favorite, people would maybe pull me back,” Van Rouwendaal said. “I tried to stay second and third, and then saw Ana. It's best to let her stay in front, then maybe I could come back, but it got really hard.”

The seven-lap race began at 6:30 a.m. in an attempt to beat the searing conditions that have affected other Olympic sports. The swimmers benefited from cloud cover at times.

The air temperature during the latter stages of the race was 86 degrees Fahrenheit (30 Celsius), with 74% humidity that made it feel like 95 degrees (35 C). The water temperature was about 84 degrees (29 C), under the allowable limit of 88 degrees (31 degrees C).

The Odaiba Marine Park course in Tokyo Bay featured a backdrop of skyscrapers, the Rainbow Bridge and the Olympic rings floating nearby.

Alice Dearing, the first Black female swimmer to represent Britain in the Olympics, finished 19th out of 25 swimmers, over 5 1/2 minutes behind the winner.

“It's incredible to race at the Olympics, but I'm really disappointed. I have more to give than that,” she said. "It was just the pace, I guess. I wasn’t expecting it. I was constantly playing catch-up.”