Brazil's Mourao trades bike for skis for next Winter Games 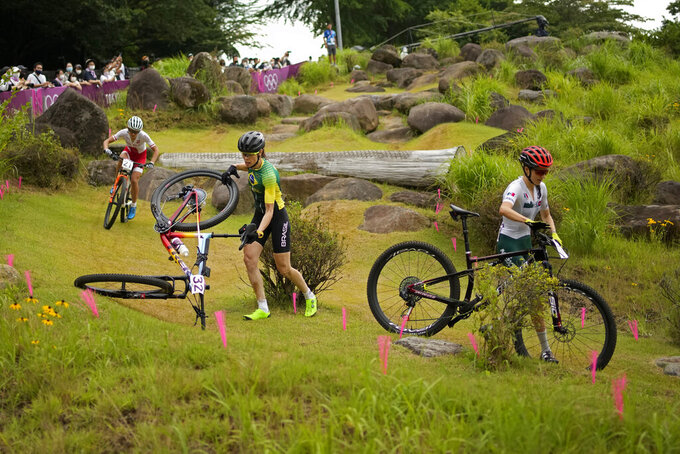 Jaqueline Mourao of Brazil picks up her bike after falling as she competes with Daniela Campuzano Chavez Peon of Mexico, right, andMaja Wloszczowska of Poland (21) during the women's cross-country mountain bike competition at the 2020 Summer Olympics, Tuesday, July 27, 2021, in Izu, Japan. (AP Photo/Christophe Ena)

IZU, Japan (AP) — The real work began for Jaqueline Mourao the moment she finished a muddy mountain bike race at the Tokyo Games.

With her seventh Olympics behind her, the 45-year-old Brazilian planned to immediately swap her bike for her skis.

She is planning to compete in cross country at the Beijing Games in February, which would move her into a tie for the third-most Olympic appearances by any athlete and break the record by someone from her country.

“There's a quick transition in little time,” said Mourao, who finished 35th of 38 starters in the mountain bike race held in the forested hills southwest of Tokyo. “In March we stopped (skiing), then I trained mountain bike in April, May, June and July. Now I will get back to muscle training to get that core strength back.”

Mourao, who was born in the mountainous Brazilian city of Belo Horizonte, made her Olympic debut in mountain biking at the 2004 Athens Games. She also competed four years later in Beijing — yes, she would also be the first athlete to compete at summer and winter Olympics in the same city in February — before stepping away from the sport for a decade.

During that time, the woman from a sun-kissed, warm-weather nation lost her heart in the snow.

Despite picking up skiing at 29 years old, Mourao fell in love with everything so many of her compatriots disdain. That allowed her to take advantage of the fact few Brazilians participate in winter sports and qualified for the 2006 Winter Games in Turin, Italy. She was back four years later in Vancouver, added shooting to her repertoire and qualified for the cross country race and biathlon in Sochi, then was back to just skiing for the 2018 Games in Pyeongchang.

She's not the only Brazilian to compete in her seventh Olympics this year. Soccer player Formiga, equestrian Rodrigo Pessoa and sailor Robert Scheidt also reached that benchmark in Tokyo.

None of them is planning to compete six months later in Beijing, though.

“I came back to mountain bike much stronger after having lived as a cross-country skier,” said Mourao, who did not compete in the Olympics in her home nation in 2016. She was still focused entirely on skiing at the time.

“It helps me a lot because it gives me much more joy to go biking," she said. "Before, I was on the bike for 12 months a year. Now, I ski in the winter and come back to mountain bike with a lot more joy. So it's good mentally, too.”

Equestrian Ian Miller of Canada set the record with 10 Olympic appearances in 2012. Hubert Raudaschl of Austria took part in nine Summer Games in sailing and Afanasijs Kuzmins of the Soviet Union and Latvia the same in sailing.

But none of those sports has the same physical demands as skiing, where those competing for medals are usually 20-year-old athletes in their primes. The two sports demand flawless technical skills and ability, but they also require immense cardiovascular and leg strength that tends to lag as athletes get older.

Still, there's precedent when it comes to cyclists competing in winter sports.

Mourao is different in that she comes from an equatorial climate where temperatures are in the 80s in the summer, but rarely dip below the 60s in winter. Even more rarely can snow be found, and only then at higher elevations.

“I'm enjoying every moment because I know that these will be my last Olympic Games in mountain bike,” said Mourao, who has two children cheering back home. “I’m feeling happy and accomplished. I was away from mountain bike for 10 years, between 2008 and 2018. When I decided to come back I became Brazilian champion, I won a medal at the Pan American Games — and now, the icing on the cake, ending my career with the Olympics.”