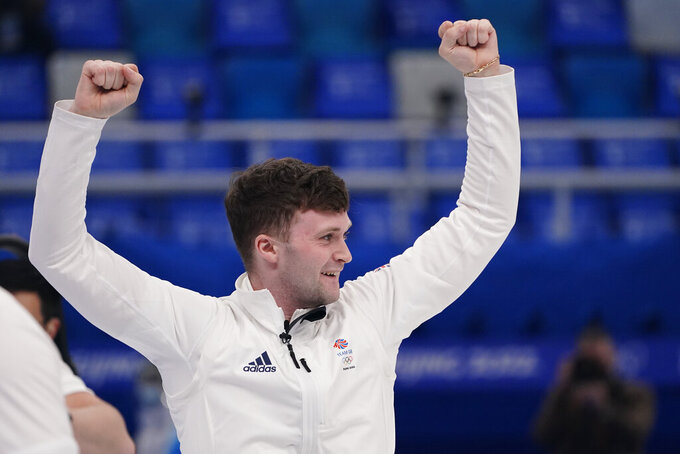 BEIJING (AP) — The British have clinched their first medal of the Beijing Games, thanks to Bruce Mouat and the men's curling team.

Four Scottish lads beat the American defending Olympic champions 8-4 in the semifinals Thursday night to clinch no worse than a silver medal and earn the right to play Sweden for the gold.

Although Scotland is curling's birthplace and the sport remains a national passion, the British have not won the men's gold — and have just two medals of any color — since the sport returned to the Winter Games in 1998.

“It'll be some party back home if we do,” British lead Hammy McMillan said. ”It would mean the absolute world to everyone if we do."

The Swedes topped Canada 5-3 in the other semifinal at the Ice Cube curling venue. Skip Niklas Edin will have a chance to complete his set of Olympic medals, having won bronze in Sochi and a silver in Pyeongchang.

John Shuster, who won bronze in 2006 and gold four years ago — the only Olympic curling medals in U.S. history — will skip the Americans in the third-place game against Canada.

“I learned a lot in Torino back in 2006, because you have this huge disappointment. And then, you know, it’s really easy to just let that disappointment linger,” he said.

“But you know what we have to just realize is we have the opportunity to come back here and be on an Olympic podium, winning an Olympic medal for the United States of America,” Shuster said. “And I think we’re going to — I know we’re going to be ready to come out tomorrow and play and do that.”

Trailing 5-4 at the five-end break, the Americans intentionally blanked three straight ends to retain control of the last-rock advantage, known as the hammer. They would have happily done it again in the ninth end, but Britain boxed them in, and Shuster intentionally threw away his last stone — conceding one point to retain the hammer in the 10th, trailing 6-4.

In the final end, Mouat left Shuster no good options for his final stone, and in desperation he wound up knocking away all of the red rocks in the scoring area to leave two British yellow ones.

“We lost to a team that played better. That’s the long and the short of it,” U.S. second Matt Hamilton said. “There’s nothing you can really say or to sugarcoat it.”

Sweden also played for the big end, blanking the sixth and seventh in a 3-3 game before Canada forced it to take a single point in the eighth. Then Canada took an intentional zero, entering the 10th down 4-3.

But Brad Gushue's last stone in the 10th was inches farther away from the center of the target, giving Edin — a five-time world champion and two-time Olympic medalist — the steal of one.