Burroughs, Dake on collision course at US wrestling trials 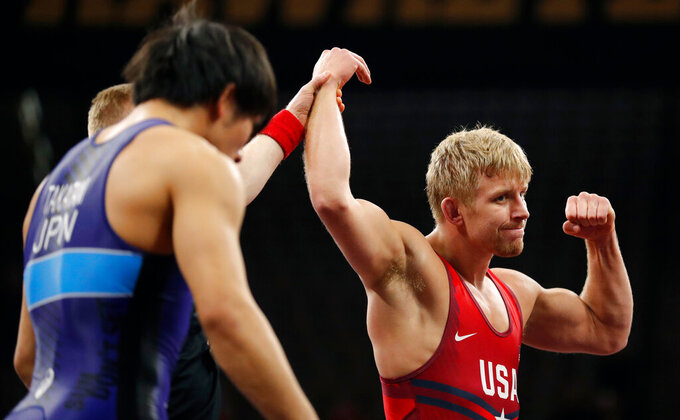 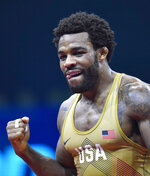 The spotlight is on Jordan Burroughs and Kyle Dake heading into the U.S. Olympic wrestling trials.

Burroughs has been the standard bearer for American wrestling since winning gold in London in 2012 and four world titles between 2011-17. Dake is a two-time defending world champion and the biggest threat to Burroughs' supremacy at 74 kilograms.

The two are expected to meet Saturday night in the best-of-three finals of the rescheduled trials at Dickies Arena in Fort Worth, Texas.

The trials originally were set for last April at Penn State but were called off when the Olympics were postponed. COVID-19 restrictions forced the trials to move to Texas starting Friday.

Of the 18 winners this weekend, 15 are assured of competing in the Olympics. The United States has not qualified at 65 kilograms in freestyle and 77 and 130 kilograms in Greco Roman. To wrestle in Tokyo, the winners at those weights will need to finish first or second in a May 6-9 world qualifier in Bulgaria.

Burroughs has won seven of eight matches against Dake since 2013. Dake's only win came the last time they met, in the first match of the best-of-three U.S. world team trials in 2017.

Burroughs' bronze at the 2019 world championships — the 2020 event was canceled — allows him to sit until the best-of-three finals Saturday. Dake, who won his world titles at the non-Olympic weight of 79 kilograms, sits until the challenge tournament semifinals Friday night.

Burroughs and Dake traded barbs before the trials were postponed last year, with Dake saying he planned to send the 32-year-old Burroughs into retirement.

“There was a lot of pent-up emotion going into the Olympic team trials and things were said and it's water under the bridge in my book,” Dake said. “I try not to take anything too personally. This is what we do, this is our business. We're trying to play those mind games, the battle within the battle. There are times all sides have to step up and go out and compete.”

The other featured freestyle weight is 97 kilograms, where Kyle Snyder awaits a likely finals showdown with J'Den Cox. Cox took bronze at the 2016 Games at 86 kilograms and won world titles in 2018 and 2019 at the non-Olympic weight of 92 kilograms.

Cox decided to move up to 97 kilograms, a courageous move considering Snyder was the 2016 Olympic champion at that weight and it also is the division of pound-for-pound great Abdulrashid Sadulayev of Russia.

“I've adjusted great,” Cox said. “It was a little rough at first. I was a little light. Originally my plan was to go down to 86. Getting the weight packed on was a little tough. I'm feeling better and moving better than I ever have.”

A major Greco Roman storyline will be whether Ildar Hafizov, a 2008 Olympian for Uzbekistan, will be able to secure a spot on the American team at 60 kilograms. Hafizov earned a spot in the finals when he reached the finals of the Pan American Olympic qualifier last March.

Maroulis, who sits until the finals at 57 kilograms, has overcome serious concussion issues and other injuries since taking gold in Rio de Janeiro. She briefly considered retirement.

“I've fought tooth and nail to get back to this point,” she said. “I trust the process, love where I’m at and love the training and preparation, so I'm ready to go. Physically, I've never felt better. My head is 100%.”