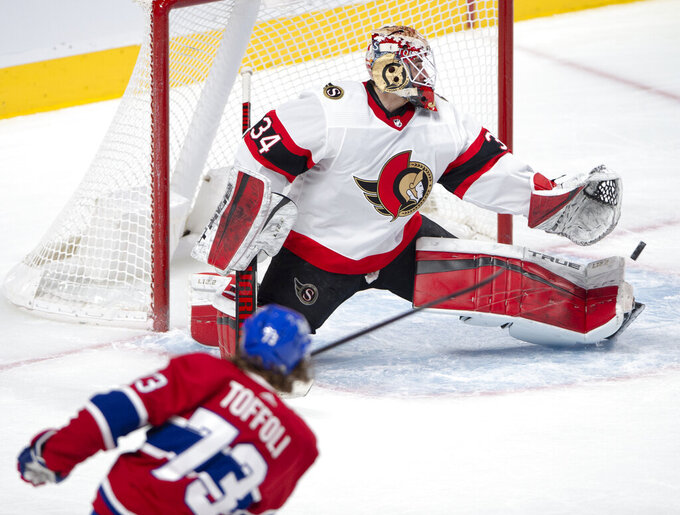 MONTREAL (AP) — Carey Price made 26 saves in a bounce-back performance and the Montreal Canadiens beat the Ottawa Senators 3-1 on Tuesday night to give rookie coach Dominique Ducharme his first NHL victory.

Jeff Petry and Brendan Gallagher each had a goal and an assist. Tyler Toffoli scored into an empty net for Montreal (10-6-5), which snapped a five-game losing streak in Ducharme's first home game in charge of the Canadiens.

“I really liked the way the guys handled themselves,” said the 47-year-old former assistant, who grew up in nearby Joliette, Quebec. “I knew they would be ready.”

Artem Zub scored for last-place Ottawa (8-16-1), which had won four of five. Joey Daccord stopped 30 shots in his second NHL start for the Senators, who fell to 3-2-0 against the Canadiens this season following Monday’s 5-1 victory over Calgary.

“We had a five-minute breakdown there where we lost focus.”

Senators winger Drake Batherson hit the post on an early four-minute power play, but did not score. That ended his six-game goal streak, which matched a franchise record.

Austin Watson also hit the post seven minutes into the third on Ottawa's best chance to tie it.

“The boys poured their hearts out,” Daccord said. “It’s unfortunate we came out on the short end of things.”

The Canadiens entered on an 0-2-3 skid and had just one victory over their last eight games (1-4-3). Ducharme replaced the fired Claude Julien last week in the wake of consecutive shootout and overtime losses to the Senators in Ottawa.

Montreal blew a 3-1 lead before dropping a 6-3 decision to the Winnipeg Jets in Ducharme’s NHL head coaching debut Thursday, then lost 2-1 in overtime on the road in Saturday’s rematch.

“It was important we had a solid game,” Ducharme said. “But also getting the win so the guys can see that we’re going in the right direction.

“If we take care of our job, the results are going to be on our side quite often.”

Price entered 5-4-3 with an .888 save percentage and a 3.13 goals-against average this season. Over his previous six starts, the former Hart and Vezina Trophy winner was 1-4-1 with an .870 save percentage.

“I’m just thankful to get back in the net and get that opportunity to get another crack at it,” said Price, who looked lost at times in allowing five goals on 29 shots Thursday in Winnipeg. ”Just been focusing on the process and keeping things simple.

“The guys played very well in front of me tonight to help me out.”

After the game, the Canadiens made another change to their coaching staff, appointing Sean Burke to take over as the director of goaltending. He replaces Stephane Waite, who was let go after holding the position since 2013. General manager Marc Bergevin made the announcement.

Burke will be required to undergo the mandatory 14-day quarantine before joining the team. Laval Rocket goaltending coach Marco Marciano will work with Montreal’s goaltenders until Burke is cleared to join the squad.

The 54-year-old Burke was originally hired by the Canadiens in 2016 as a professional scout for the Western region. He has also worked as a goaltending consultant for Montreal.

He had an 18-year NHL career, suiting up for eight organizations before moving into management post-retirement.

The three-time NHL All-Star represented Canada at the 1988 and 1992 Winter Olympics, and served as Canada’s general manager at the 2018 Winter Olympics in PyeongChang, where the team won bronze without NHL players.

Senators: Travel to Calgary for a two-game set on Thursday and Sunday.

Canadiens: Host the Winnipeg Jets for two games on Thursday and Saturday.