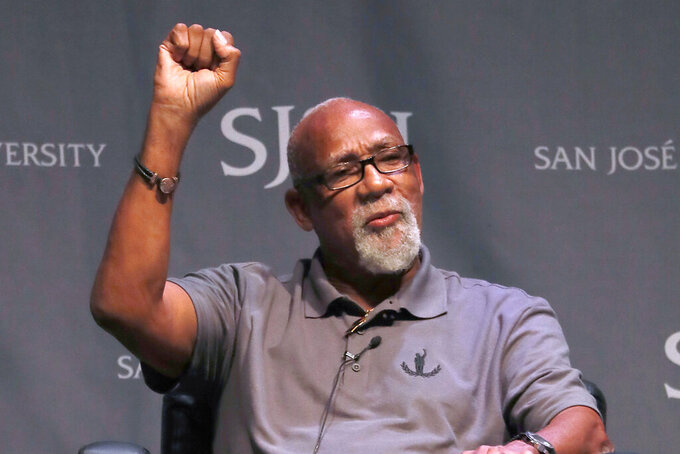 FILE - In this Oct. 17, 2018, file photo, 1968 Olympic athlete John Carlos raises his fist as he speaks about his experience as Olympians who participated in Mexico City in 1968 during the 50th Anniversary of the Defining Moment in Sports Social Activism Historic Town Hall at San Jose State University in San Jose, Calif. Olympic protestor John Carlos co-authored a letter with an influential American athletes' group calling on the IOC to abolish the rule that bans protests at the Olympics and replace it with a policy written in collaboration with athletes. Carlos and Tommie Smith raised their fists on the medals stand at the 1968 Olympics to protest racial inequality in the United States. (AP Photo/Tony Avelar, File)

DENVER (AP) — John Carlos wants to abolish the rule that bans protests at the Olympics.

The renowned Olympic protester has written a letter with an influential group of American athletes, calling on the IOC to put in place a new policy done in collaboration with athletes from across the globe.

Carlos and Tommie Smith raised their fists on the medals stand at the 1968 Mexico City Olympics to protest racial inequality in the United States. They were sent home for violating rules that ban such protests. Those rules remain in place today, though in the wake of global demonstrations against racial injustice, the IOC has recently expressed willingness to rethink them.

“Carlos and Smith risked everything to stand for human rights and what they believed in, and they continue to inspire generation after generation to do the same,” the letter said. “It is time for the Olympic and Paralympic movement to honor their bravery rather than denounce their actions.”

This month, with protests stemming from the killing of George Floyd spreading across the U.S., IOC President Thomas Bach said the athlete group would "explore different ways” opinions could be expressed during the games — while still “respecting the Olympic spirit.”

Rob Koehler, the director of the advocacy group Global Athlete, said “sport thinks they can operate under a separate rule of law. But they cannot. Athletes are working together as a collective because sport leaders have become too complacent."

Also this week, the head of the Caribbean Association of National Olympic Committees came out in favor of a redrafting of Rule 50, arguing the oft-cited IOC notion that sports should be free of politics is not realistic.

“Think of the laudable efforts regarding North and South Korea," Brian Lewis wrote. “Think of the alignment with the United Nations. Sport cannot, however, pick and choose only the political issues and campaigns it might like.”

The USOPC came under a harsh spotlight, in part because it placed hammer thrower Gwen Berry on probation last summer after she raised her fist on the medals stand at the Pan American Games.

USOPC leaders have said they are trying to expand the conversation about racial injustice, and are open to pressing for changes in Rule 50 — the IOC rule that bars protests on the medals stand and other inside-the-line venues at the games.

“Athletes will no longer be silenced,” the letter said. “We are now at a crossroads. The IOC and IPC cannot continue on the path of punishing or removing athletes who speak up for what they believe in, especially when those beliefs exemplify the goals of Olympism."