Chaotic waters: US stars win, but Dressel won't get 6 golds 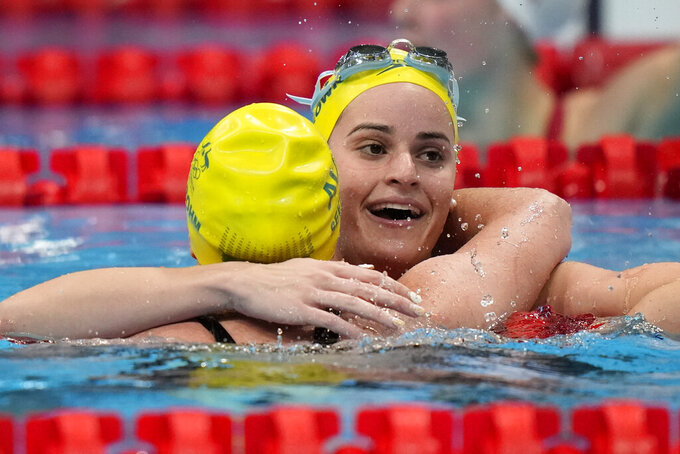 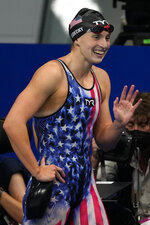 TOKYO (AP) — Caeleb Dressel is pretty much invincible when he has a lane to himself.

But give him a deficit of more than 8 seconds?

Well, that’s too much for even the world’s greatest swimmer to overcome with two laps of the pool.

On a morning of mixed emotions and chaotic racing at the Tokyo Aquatics Centre, Dressel set a world record in the 100-meter butterfly, but was basically doomed before he even dove into the pool on the new mixed relay Saturday.

So went his chances of joining a very exclusive club. His bid to win six gold medals fell apart with another U.S. relay debacle. The Americans were too far behind in the 4x100-meter mixed medley when their top swimmer took over, so the best Dressel could do was rally the U.S. to a fifth-place finish in an event that features two men and two women on each team. Britain set a world record to win the gold.

It was a disappointing capper to a golden morning for the Americans, whose biggest swimming stars both ascended to the top of the medal podium.

After Dressel won his third gold of the games, Katie Ledecky closed out her grueling Olympic program with a third straight victory in the 800 freestyle.

Ledecky was pushed hard by Australian rival Ariarne Titmus, but the American held on in a race she hasn't lost since 2010.

Ledecky finished up with two golds, two silver and a fifth-place finish at the Tokyo Aquatics Centre — not as successful as she was five years ago in Rio de Janeiro, but not bad at all.

Ledecky became the first female swimmer to capture six individual gold medals in her career with another Olympic title in the 800 free, winning with a time of 8 minutes, 12.57 seconds .

“I could see her the whole way,” Ledecky said of Titmus. “I was trying to keep tabs on her and trying to inch my way out a little bit each 50. I knew she was just going to be lurking there the whole time.

Ledecky lost her first two individual matchups with Titmus, but finally beat the Terminator in their final showdown.

“I knew I had to have a little gap,” Ledecky said, "because if we were neck and neck on the last 100, I know she she has that finish.”

Dressel led right from the start in the fly and held off Hungary’s Kristof Milak to touch in 49.45 seconds, breaking the mark of 49.50 that the American set at the 2019 world championships.

Milak, winner of the 200 fly, earned the silver with a blistering 49.68. The bronze went to Switzerland’s Noe Ponti.

When he saw the “WR” beside his name, Dressel smiled and joined hands with Milak in the lane next to him. They raised their arms together before Dressel flexed his left arm and pumped it in the air.

“He’s going to put me out of a job one day, so I’m just trying to hang on as long as I can,” Dressel said. “Kristof executed perfectly. We both swam exactly the race we needed to.”

The Australian women added another gold.

Kaylee McKeown completed a sweep of the backstroke events with a victory in the 200. Her winning time was 2:04.68.

It's been a huge Olympics for the Aussie women. They have won six of their team's seven gold medals at the pool.

In another bummer for the Americans, Simone Manuel failed to advance to the final of the 50 free, her only individual event in these games.

The first Black American woman to win an individual swimming gold posted the 11th-best time in the semifinals and was eliminated, capping a trying year in which she was diagnosed with overtraining syndrome.

Dressel advanced easily in the men's freestyle semifinals with the top final time (21.42).

The mixed medley was another story.

For the second time at these Olympics, the U.S. failed to win a relay medal, joining a fourth-place finish in the men’s 4x200 freestyle. Before Tokyo, the Americans had never failed to finish in top three of an Olympic relay they entered.

The Americans tried a different strategy than everyone else, going with Dressel on the freestyle while the other seven teams all closed with a woman.

The Americans faltered when 17-year-old Lydia Jacoby — already the only woman swimming the breaststroke leg —had her goggles knocked off on her dive into the water.

The 17-year-old struggled to finish in 1:05.09, her goggles dangling from her mouth as the rest of the field pulled away.

“I’ve never really had that happen before,” said Jacoby, who one wears a single cap while most swimmers wear two largely to prevent such a problem. “I was definitely panicking a little. My turn was where it was most rough because I couldn’t see the wall.”

Her teammates praised her effort.

“Anyone that swam with their goggles in their mouth like she did (knows) she did fantastic,” said Ryan Murphy, who took the opening backstroke leg.

When 18-year-old Torri Huske passed off to Dressel after the butterfly leg, the Americans were 8.01 seconds behind the leaders in last place.

Dressel furiously tried to cut into the huge gap. His 46.99 leg was better than his winning time in the 100 free individual event, but it wasn’t nearly enough to chase down all the teams ahead of him.

“Everyone swam as well as they could in the moment,” Dressel said. “We got beat by a better team.”

He was hoping to sweep his six events, which would have made him only the the fourth swimmer and fifth athlete overall to win six gold medals at a single Olympics.

Swimming icon Michael Phelps did it twice, capturing six golds at the 2004 Athens Games before setting the record with eight golds in Beijing four years later.

For Dressel, who has two more races on the final day of swimming, five golds is now the best he can do.