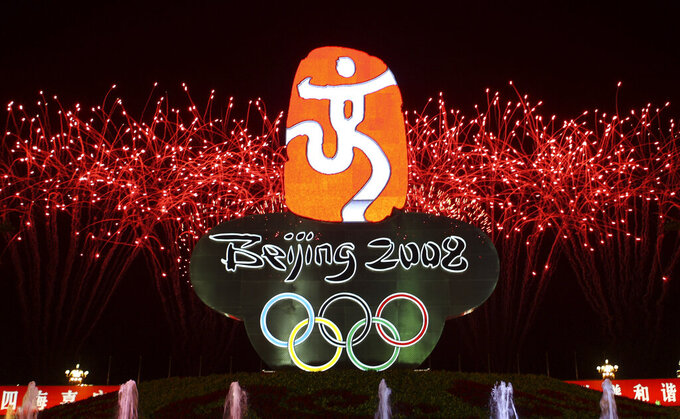 FILE - Chinese authorities test fireworks ahead of the Aug 8 start of the Olympic Games on Tiananmen Square in Beijing, China, Saturday, Aug 2, 2008. Richer, more heavily armed and openly confrontational, China has undergone history-making change since the last time it was an Olympic host in 2008. (AP Photo/Ng Han Guan, File)

BEIJING (AP) — China has undergone history-making change since the last time it was an Olympic host in 2008: It is richer, more heavily armed and openly confrontational.

As President Xi Jinping’s government prepares for February’s Winter Olympics, it has greater leverage to exert influence abroad and resist complaints from the United States and other governments over trade, technology theft and its treatment of Taiwan, Hong Kong and China’s Muslim minorities.

The economy is three times larger today. The ruling Communist Party is using that wealth to try to become a “technology power” and is spending more on its military than any country other than the United States.

“2008 was a turning point,” said Jean-Pierre Cabestan, an expert on Chinese politics at Hong Kong Baptist University. “That was the beginning of China’s assertiveness.”

As fireworks exploded over Beijing in August 2008, China was about to overtake Japan as the No. 2 global economy. The ruling party celebrated with the most expensive Summer Games to date.

Foreign media dubbed it China’s “coming out party,” echoing the Tokyo Olympics in 1964 that symbolized Japan’s recovery from World War II. After three decades of keeping its head down to focus on development, Beijing was ready to emerge on the global stage as an economic and political force.

The ruling party declared its more assertive stance in 2012, the year Xi took power, in a document that called for “more strategic rights,” military status and a bigger global role.

Xi’s government sees its system of one-party dictatorship under threat and accuses Washington of trying to deny China its rightful role as a global leader. The ruling party is tightening control over society and business and using internet filters and other censorship to shut out what it deems unhealthy foreign influences. It is doing more to intimidate Taiwan, the island democracy Beijing says belongs to China.

“You can see that China is forced by the United States and its allies such as Australia, Japan and Britain to do so,” said Shi Yinhong, a professor of international relations at Renmin University in Beijing.

Xi is seeking to cement his control over the country. He is expected to use key political meetings late in 2022 to try to break with tradition and stay in power for a third five-year term as head of the ruling party. Earlier, he had the Chinese constitution changed to get rid of term limits on his role as president.

Once “more open to the outside world,” China now is “much more paranoid,” Cabestan said.

Beijing has sent warplanes in growing numbers to fly near Taiwan. It is pouring money into developing nuclear-capable missiles that can hit the United States and aircraft carriers and other weapons to extend its military reach beyond China’s shores.

Chinese leaders believe, Shi said, that they need to defend themselves on several fronts: a tariff war launched by then-President Donald Trump in 2018; curbs on access to U.S. technology; and military alliances involving Japan, Australia and other governments to counter Beijing's claims to the South China Sea and other territory.

“If there is a bad relationship between China and another country, it is because the other country harms China,” Shi said.

In 2008, Summer Games preparations included a $43 billion makeover of the Chinese capital. The party built the eye-catching Bird's Nest stadium and other Olympic venues, installed new subway lines and upgrading roads. Exercise equipment was installed in thousands of public parks across China.

The capital, one of the world's smoggiest cities, launched a “blue sky” campaign that shut down or replaced power plants, steel mills and other facilities and imposed traffic controls at an estimated cost of $10 billion.

Today, Xi’s government is wrestling with debt, pollution and other excesses of earlier years. It's also in the midst of a marathon campaign, launched before he took power, to steer the economy to sustainable growth based on consumer spending instead of exports and investment.

Under a vaguely defined initiative — dubbed “common prosperity” after a 1950s slogan — the ruling party is trying to narrow a politically volatile wealth gap between a billionaire elite and China’s working-class majority.

Successful private sector companies in e-commerce and other fields are under pressure to invest in the party’s efforts to reduce reliance on the United States, Europe and Japan as technology suppliers by developing computer chips and other products. They are paying for rural job creation and other political initiatives.

Xi and other leaders promise to open markets wider to foreign and private competitors while also saying government-owned banks, oil producers, telecom carriers and other companies are the “core of the economy.” Business groups complain that despite steps such as ending limits on foreign ownership in auto manufacturing, global companies are being squeezed out of promising technology and other fields.

“China will continue to expand its opening up to the outside world,” Xi said in a Jan. 17 speech by video link to the World Economic Forum in Davos, Switzerland. He promised to “ensure all enterprises have equal status before the law and equal opportunities.”

In a slap at Washington, Xi complained about “hegemonic bullying” and said governments need to “abandon a Cold War mentality.”

As athletes and reporters arrive ahead of the Feb. 4 opening of the Winter Games, Chinese leaders face the challenge of shoring up slumping economic growth while they try to contain coronavirus outbreaks and force real estate developers, an industry that supports millions of jobs, to cut debt that Beijing worries is dangerously high.

China rebounded quickly from the 2020 pandemic and became the only major economy to grow that year. But growth fell abruptly in late 2021 as Beijing’s debt crackdown bit, triggering a slump in real estate sales and construction.

The economy expanded by a robust 8.1% in 2021 but growth tumbled in the last quarter to 4% over a year earlier. Forecasters say the slump will deepen before interest rate cuts and other stimulus measures can take effect. The World Bank and private sector economists have trimmed this year’s growth forecasts to as low as 5%, though that still would be among the world’s strongest.

“Economic stability is the top focus in 2022,” said Tommy Wu of Oxford Economics in a report.