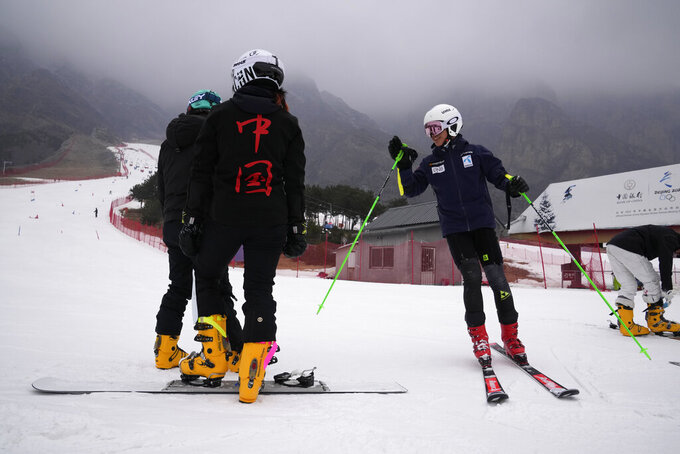 A skier gestures to others, one wearing a suit with the characters reading "China", on the slope of the Vanke Shijinglong Ski Resort in Yanqing on the outskirts of Beijing, China, Thursday, Dec. 23, 2021. The Beijing Winter Olympics is tapping into and encouraging growing interest among Chinese in skiing, skating, hockey and other previously unfamiliar winter sports. It's also creating new business opportunities (AP Photo/Ng Han Guan)

BEIJING (AP) — Holding his skis beside a bunny slope, Li Wei enthuses over his winter job as a farmer-turned-ski coach on the northwestern outskirts of Beijing.

The tall, tanned 36-year-old works December to March at a resort in the Yanqing district, which will host skiing, luge and other sliding events at the Winter Olympics, which open next week.

The ruling Communist Party is using the Games to promote winter sports, many of which are new to most Chinese, for fitness and business opportunities.

Skiing “boosted my income to another level,” said Li, who charges 400 to 500 yuan ($60 to $80) per lesson — almost as much as his family earns in a week growing corn during warmer months. He also finds skiing relaxing.

“After a few slides down the intermediate slope, all my troubles are gone," he said.

Many in Beijing have long enjoyed winter ice skating on canals and lakes. But now, young Chinese are expanding their aspirations from basketball, football and gymnastics to sports such as hockey and skiing.

The government and private companies have built ice rinks and ski runs. Public schools are adding skating and other winter sports. Parents are opening their wallets to pay for hockey teams and skating lessons. Villages near ski slopes are building inns to serve well-heeled tourists.

“I want to be an ice hockey player in the future,” said 8-year-old Guo Yuchen, who took up the sport at 4 and trains seven hours a week at a rink in Beijing. “Then I can bring glory to my country.”

Wu Mengkai, 11, said hockey made him more extroverted and a “very sunny person.”

“You can’t be introverted when you play ice hockey,” Wu said. “You have to be brave enough to fight.”

The buildup to the Winter Olympics set these trends in motion, said Mark Dreyer, author of the book “Sporting Superpower: An Insider’s View on China’s Quest to Be the Best.”

“We’ve also seen a more organic push from China’s middle class, recognizing the value of sports not just for their children, but for themselves,” Dreyer said.

The Winter Games will take place without foreign tourists or ordinary spectators under China's “zero tolerance” strategy that aims to keep the virus out of the country. Athletes, reporters and officials are required to stay within areas that isolate them from general public.

Some 106 of the 3,695 people who arrived from abroad for the Games so far tested positive for the coronavirus. Two are athletes or team officials.

The Chinese capital has tightened anti-virus measures and ordered mass testing of some 2 million people in one district following outbreaks. Some families are barred from leaving their homes.

Foreign sports brands see growth opportunities in China but are frustrated that marketing and business development are hampered by the anti-virus controls and ban on most foreigners from entering China.

If not for the virus, the marketing boost from the Olympics would have been bigger, really helping the economy and making hockey more popular, Potter said in a video conference interview from Toronto.

At the Vanke Shijinglong Ski Resort, where Li teaches, visitor Long Xuelian said she fell in love with skiing on her first try despite taking many spills.

“More and more friends of mine know how to ski,” said Long, who was taking a break from skiing and chatting with her friend.

The resort's visitor numbers have risen by 15% to 20% a year since Beijing and neighboring Zhangjiakou were awarded the Winter Games in 2015, according to its marketing manager, Liu Yingkai. Liu said numbers were up 40% last year, even with the pandemic.

Zhang Xiaodong grew up in Zhangjiakou but never learned to ski, so he's taking up the sport as an adult. “I have to learn how to ski so when I bring my kid here next time, I'll know how to teach my kid,” the IT engineer said.

At least 8,000 people in Beijing are on hockey teams, the Communist Party newspaper People's Daily quoted Xing He, the deputy secretary general of the Beijing Ice Hockey Association, as saying.

Nationwide, more than 450 ice rinks and 300 snow resorts have been built since 2015, though some have closed at times during the pandemic, said Li Sen, director of the Beijing Olympic organizing committee's General Planning Department.

Skiing and other sports have given an economic boost to villages near resorts.

“For tourists to eat, there must be restaurants around,” said Jiang Xinwei of Analysys International, a research firm in Beijing.

Houheilong Miao, a village in Yanqing, has a view of the Olympics skiing venue in the distance. Its 20 mostly vacant traditional courtyard houses have been turned into lodgings and a cafe dubbed the “Winter Olympic Home."

Wang Haifang, a mother of two, is among local residents hired to work as baristas, butlers and cleaners. She welcomed seeing the once-rundown village cleaned up like modern urban areas of Beijing.

“In the past year, everything got into shape,” she said.