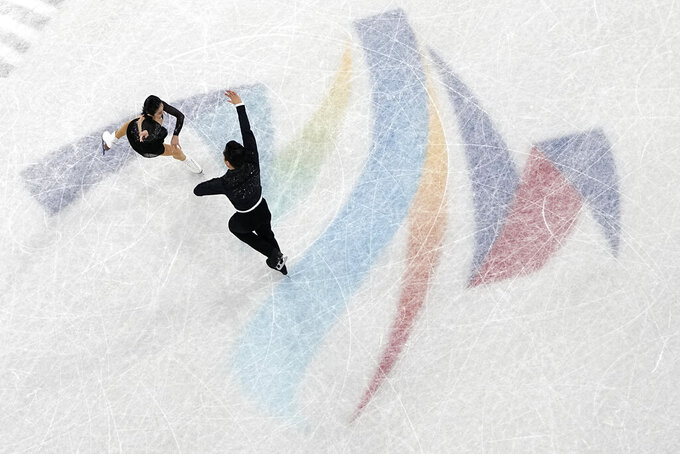 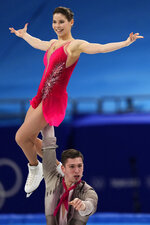 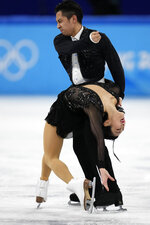 BEIJING (AP) — Sui Wenjing and Han Cong are in a most familiar place atop the pairs competition at the Olympics.

They plan to hold onto the spot this time.

Four years after a shaky free skate dropped the two-time world champions to the silver medal in Pyeongchang, Sui and Han shattered their own world record for a short program at the Beijing Games on Friday night. Their score of 84.41 points gave them the narrowest of leads over Russian rivals Evgenia Tarasova and Vladimir Morozov.

“We are very happy, but it was never about a world record,” Sui said, "only joy on the ice at home.”

Sui and Han certainly skated with joy before a carefully curated crowd of mostly Chinese fans inside Capital Indoor Stadium. They landed a perfect triple toe loop and throw triple twist to open their program, set to an orchestral suite from “Mission: Impossible 2,” then received Level 4 marks — the highest possible — on every element the rest of the way.

That topped their record of 82.83 set during the team competition earlier this month.

Tarasova and Morozov, coached in part by the controversial Eteri Tutberidze, also would have broken the record with their short program. Instead, the fourth-place finishers in Pyeongchang were just behind with 84.25 points.

World champions Anastasia Mishina and Aleksandr Galliamov were next with 82.76 points, and Aleksandra Boikova and Dmitrii Kozlovskii had 78.59, giving the Russian Olympic Committee three of the top four heading into Saturday night.

Their nation has won five of the past seven Olympic pairs gold medals, including the controversial shared one at the 2002 Salt Lake City Games. Russian skaters have eight pairs medals overall since the 1994 Lillehammer Games.

As for the dark cloud that continues to swirl around the Russian figure skating team in Beijing?

Still, it was stunning to see Tutberidze rink-side for the pairs competition just hours after she and the Russian coaching staff were criticized by International Olympic Committee President Thomas Bach for their cold, callous attitude toward 15-year-old Kamila Valieva following the women's free skate the previous night.

“It was chilling to see this,” Bach said during his Friday news conference, without identifying Tutberidze by name. “Rather than giving her comfort, rather than to try to help her, you could feel this chilling atmosphere, this distance.”

Brandon Frazier and Alexa Knierim, who were instrumental in helping the U.S. win team silver to open the Beijing Games, threw down one of their best short programs after a nearly two-week wait to compete again.

Frazier, who withdrew from nationals after contracting COVID-19, and Knierim, competing in her second Olympics, were nearly perfect from their opening triple twist lift on to a rendition of “House of the Rising Sun.” They were the second team to perform and scored 74.23 points, a standard that stood through most of the night.

“We've trained so hard to endure whatever is brought to us," Knierim said, "and I feel like today we did a good job of staying focused, no matter how we felt, and just delivered the best we could with what we were given.”

Their teammates, Ashley Cain-Gribble and Timothy LeDuc, were just a tenth of a point back after a marvelous short program set to “The White Crow” by British composer Ilah Eshkeri. Cain-Gribble literally danced her way off the ice with LeDuc, the first nonbinary American athlete to compete at the Winter Games.

“Everything felt good and in our control,” Cain-Gribble said. "We just kept looking at each other, and we were like, ‘It’s been six years of work to get here,' and we weren’t going to let any moment get away from us.”

Among those chasing early were Germany's Nolan Seegert and Minerva Fabienne Hase, who finally got on the ice after he tested positive for COVID-19 in Beijing. They missed 10 days of practice and had to withdraw from the team event.

If their luck was bad, Mark Magyar and Ioulia Chtchetinina had worse. They had been practicing throughout the Olympics, only for him to test positive and forcing them to withdraw just before the start of their competition.

This story has been updated to correct the Chinese skater's name to Han Cong.