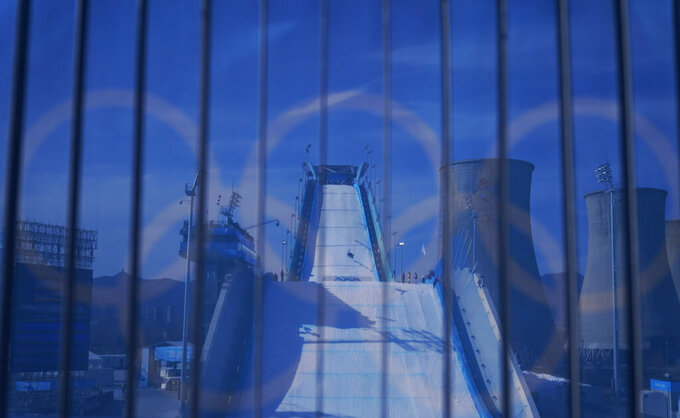 The Olympic Rings displayed on a fence as an athlete trains ahead of the men's freestyle skiing big air qualification round of the 2022 Winter Olympics, Monday, Feb. 7, 2022, in Beijing. (AP Photo/Jae C. Hong)

BEIJING (AP) — Alex Hall is accustomed to a grand mountain vista. The American freestyle skier could get used to the view atop Big Air Shougang, though.

“The like, crazy smokestack things in the back are pretty cool,” he said. “You get to see some of the mountains in the background, you got this temple here, the city’s that way, the steel factory. You get to see a lot of stuff.”

Anytime he and his fellow big air competitors come back to China, plenty of people will get to see them, too.

Freeski big air opened its Olympic competition Monday at the world’s first permanent, city-based big air facility, a repurposed steel mill on the west side of Beijing that’s made a stunning backdrop for one of the Games’ newest sports. Freeskiing is taking on big air for the first time as a Winter Games discipline, while the snowboarders will be here next week after debuting the event in Pyeongchang four years ago.

The 200-foot big air structure was built on the site of the former Shougang Group steel mill, China’s first state-owned plant that helped the country become a world leader in steel production. Its billowing smokestacks provided work for thousands but also darkened the sky over Beijing’s Shijingshan District, contributing to the city’s air pollution problem.

China closed the factory in conjunction with the 2008 Summer Games, seeking to clean up its image, as well as its air.

The sprawling campus has been converted into a bizarre, yet beautiful, city oasis.

Rusting factories and machinery remain, but the space between has been filled by grassy lawns, glassy ponds and a good deal of greenery. One of the blast furnaces was given a face-lift and turned into a steampunk-style event space with shops, commercial offices and a museum. The yards host dance showcases in the summer, and architects plan to transform one of the massive cooling towers hovering over the big air jump into a wedding venue.

“This feels like it was created in a virtual world, in a video game,” American freeskiier Nick Goepper said.

It’s also central to China’s efforts to encourage 300 million people to participate in winter sports in conjunction with these Games. Facilities were carved into the complex’s infrastructure to help Chinese athletes train in short track speedskating, figure skating, ice hockey and curling. The Beijing Organizing Committee is even based out of the park’s offices.

The eye-catcher, though, is big air.

The discipline is a sort of high-risk home run derby for snowboarding and freestyle skiing, taking one element of the sport and pushing it to its extreme. Because the jumps span only a couple of hundred feet — compared to several thousand on slopestyle courses — they’re a strong fit for live audiences.

Even better, you don’t need a mountain to put on a big air event. Temporary jumps have been erected at Boston’s Fenway Park and Atlanta’s Truist Park in recent years, bringing the mountain sport to metropolitan areas instead of asking the masses to trek up to ski and snowboarding’s native slopes.

“When we went to Atlanta, lots of those people don’t get to see snow that often,” American snowboarder Chris Corning said. “I’m not sure they have snowplows there.”

The freeskiers have noticed an enormous uptick in quality at the permanent Big Air Shougang. As American Colby Stevenson said, scaffolding jumps like the one in Atlanta can be “pretty sketchy.”

“It’s a little bit scary just because you can like, feel it out there swaying,” teammate Mac Forehand said.

With narrow runways and shorter, flatter landings, those temporary setups aren’t conducive to going big. The spacious Shougang setup doesn’t have those restrictions.

“It feels like we’re up in the mountains,” Swedish freeskier Oliwer Magnusson said.

That's shown during practice runs, when several skiers have thrown down previously unfinished tricks. The men’s freeskiers expect their rivals to break new ground in the finals Wednesday, and that’s only possible because of the jump’s quality.

It has athletes drooling over the possibility of other permanent venues cropping up elsewhere, but it's not clear that's going to happen. China invested aggressively in its push to get citizens involved in winter sports, which is what made Big Air Shougang possible.

“I think that the direction is the correct one to be going in,” said American-born Eileen Gu, who is competing for China in part because she wants to inspire Chinese girls to take up skiing.

Such a venue might not get enough use to justify in another city, though. The Shougang jump was laid out so the seats can also be used for concerts and shows in summer, but the ramp itself has limited utility. After all, there are only so many skiers and snowboarders who can handle being thrust 20-plus feet in the air.

“If something like this was sustainable enough to repeat all over the world, I think that would be super-duper cool,” Goepper said. “This just brings the sport closer to the public.”

Either way, there's appreciation for the peculiarity of what's happening here, where the yards that once poured pillars of black smoke into smoggy Beijing are shooting Olympians skyward instead.

“One of the coolest things I’ve gotten to see," Forehand said.