Dairy farmers begin to flush away milk due to coronavirus 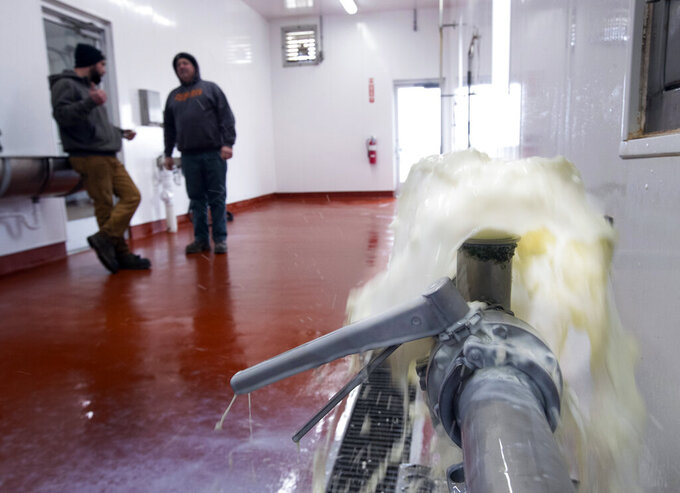 WEST BEND, Wis. (AP) — Many dairy processing plants across Wisconsin have more product than they can handle and that's forced farmers to begin dumping their milk down the drain.

That's the case at Golden E Dairy near West Bend. Farmer Ryan Elbe told WISN-TV they are dumping about about 30,000 gallons (113,562 litres) a day.

The coronavirus has dried up the marketplace for dairy products as restaurants, schools and business in food service have been closed. About one-third of the state’s dairy products, mostly cheese, are sold in the food-service trade.

“We thought this would never happen,” Elbe said. “Everybody’s rushing to the grocery store to get food, and we have food that’s literally being dumped down the drain.”

The Journal Sentinel reported that Elbe's cooperative, Dairy Farmers of America, for now has agreed to pay them for milk that’s being dumped. But, like most cooperatives, DFA can only afford to do that for so long.

Some of Wisconsin's biggest farm groups are asking the U.S. Department of Agriculture to use money under the federal coronavirus stimulus bill to buy large amounts of dry milk, butter and cheese that normally would go to restaurants and the food-service industry.

The groups, including the Wisconsin Cheese Makers Association, Edge Dairy Farmer Cooperative and the Dairy Business Association, made their request in a letter to U.S. Agriculture Secretary Sonny Perdue.

“Commodity dairy prices have plummeted and will result in milk prices lower than many farms can handle to sustain long-term viability,” the letter said.

“I think that a lot of milk will all of a sudden be dumped. Everyone across the industry is feeling distressed now,” said Julie Sweney, spokeswoman for FarmFirst Dairy Cooperative in Madison.

Farmers’ milk prices gradually returned to profitable levels recently after struggling for more than five years. About 820 Wisconsin dairy producers quit in 2019 alone, a rate of more than two per day.