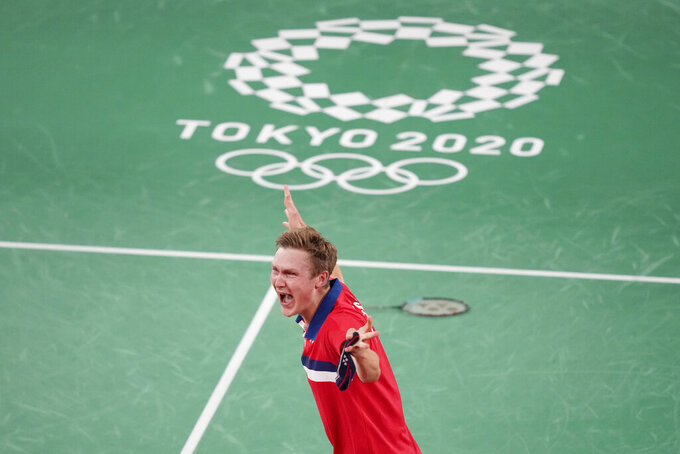 Axelsen, who won bronze at the 2016 Rio de Janeiro Games, was aggressive from the start. He took the first game 21-15 and overwhelmed Chen in the second, 21-12.

Both players are tall and powerful, and in a feature of high-level badminton, they routinely mixed fast precision smashes along the edges of the court with delicate touch shots near the net. Some of the rallies approached a minute in length.

Chen had been trying to become the second Chinese man in a row to win back-to-back Olympics in the sport. Lin Dan won gold at the 2008 Beijing and 2012 London Games.

His loss will be keenly felt in China, which has had two spotty Olympics after a long reign of dominance. China swept all five gold medals at London in badminton, which officially entered the Olympics in 1992, in Barcelona.

Earlier Monday, Indonesia’s Anthony Sinisuka Ginting won the bronze medal, ending the surprising run of Kevin Cordon of Guatemala, which is not a traditional power in badminton.

The tournament field was helped when world No. 1 Kento Momota of Japan had an early loss.

One bright spot in Tokyo for China was Chen Yu Fei, who won gold in a thrilling women’s match against Taiwan’s Tai Tzu-Ying. China had taken four straight golds in women's singles until Rio, when Carolina Marin of Spain won. Marin did not defend her title because of a knee injury.

But the former powerhouse struggled in some of the team events in Tokyo.

In women’s doubles, the unseeded Greysia Polii and Apriyani Rahayu of Indonesia upset China’s Chen Qing Chen and Jia Yi Fan, 2-0. China had won a remarkable five straight golds in women’s doubles before losing at Rio to a Japanese pair.

In men’s doubles, Taiwan’s Lee Yang and Wang Chi-Lin, who were unseeded, swept China’s Li Jun Hui and Liu Yu Chen for gold. China had won gold in the event at London and Rio.