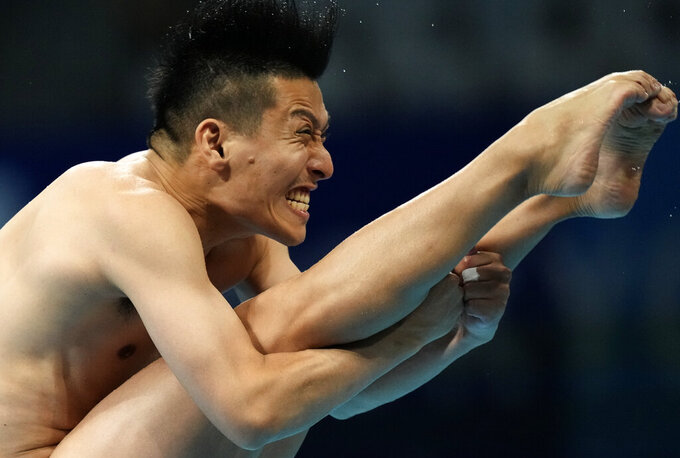 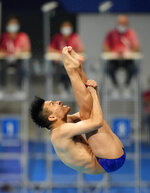 TOKYO (AP) — Ken Terauchi climbed out of the water after his last dive and bowed, soaking up a standing ovation.

The Japanese diver didn't win a medal at his home Olympics, but he did make the final of the men's 3-meter springboard in his sixth Games. That was a victory in itself.

Four days shy of his 41st birthday, Terauchi finished last among 12 divers on Tuesday. He was trying to become the first Japanese diver to earn an Olympic medal.

“I'm kind of disappointed I wasn’t able to get the medal,” he said through a translator, “but I really feel appreciated by the standing ovation.”

Terauchi was seventh coming into the final.

He tied for ninth after his first dive. He fell to last after his third dive, a reverse 2 1/2 somersaults with 1 1/2 twists pike. He received his lowest score of the six-dive round for the second-most difficult dive of his list.

“I wasn’t nervous at all,” he said. “I just got caught up in the Olympics. I should have left that mindset somewhere else.”

Terauchi’s highest finish was eighth in 3-meter at the 2000 Sydney Games and again four years later in Athens. He won a silver medal on springboard at the 2001 world championships in Japan.

After the 2008 Beijing Games, he retired and worked as a sales representative for a sports equipment company. He returned to diving two years later and went on to make his fifth Olympic appearance in 2016. His six Olympics are a record for a Japanese diver.

“The Olympics was a good chance for me to think about my future plans and reflect on the past,” he said. “A lot of people were watching today. I feel sad and disappointed with the results.”

At the same time, Terauchi was grateful for the support and the efforts of the volunteers and staff to stage the Games a year late because of the coronavirus pandemic.

Last August, he was hospitalized for five days after testing positive for COVID-19 and experiencing symptoms of the virus.

Terauchi isn't sure of his future in the sport, but he was looking forward to treating himself.

“I want to eat a really big bowl of soy sauce ramen,” he said. “I have not eaten it for almost six months.”