D'oh, Canada! Figure skating powers are shut out in Olympics 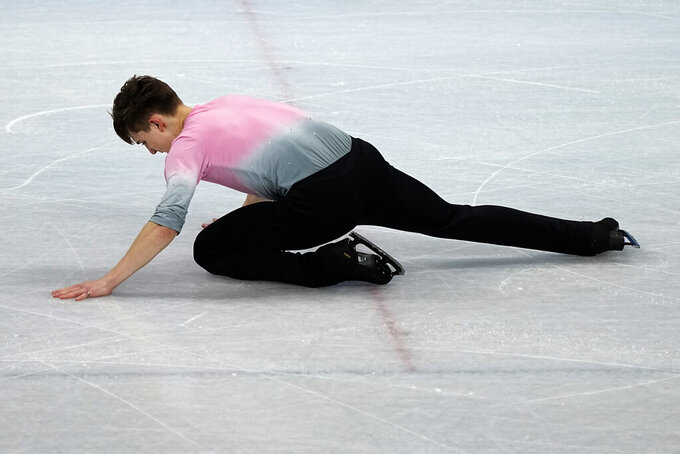 BEIJING (AP) — The throw element in pairs figure skating is both spectacular and terrifying: One of the skaters grabs the other by the waist and tosses them high into the air, where they usually spin three times before landing gracefully on one skate.

It's not uncommon for crash landings, but what about when both skaters hit the ice? That warrants an explanation.

“I hit my toe pick after I threw her,” Michael Marinaro of Canada said after precisely that happened during their calamitous short program at the Olympics on Friday night, “and I fell on my face.”

That about sums up Canada's figure skating team these days.

Whether it was its two men finishing ninth and last among 29 skaters, or its only woman barely cracking the top 20, the once-proud skating country has slipped, fallen and, yes, landed on its face during two weeks of competition. The same country that led the figure skating medal table four years ago in Pyeongchang could be shut out in Beijing.

The caveat: The Canadians finished fourth in the team event, and depending on the outcome of a doping investigation involving the Russian team, they could be upgraded to the bronze medal months or perhaps years down the road.

“I think if you follow the trends around the world, there's always ebbs and flows and rises and falls, in terms of an entire skating team being really, really strong,” said Eric Radford, who teamed with the retired Meagan Duhamel to win bronze in the pairs competition in Pyeongchang but is well out of contention with new partner Vanessa James this year.

“It'll take time for the young athletes like Madeline Schizas,” Radford said of the lone woman on the team. “She's young, she's new. She's an incredible fighter, an incredible skater. Give her another four years and see what she develops into.”

Fortunes of a figure skating team can rise just as quickly as they can fall. The current “it” team behind the always strong and seemingly always controversial Russian team is Japan, which won the bronze ahead of Canada.

Yuma Kagiyama and Shoma Uno rounded out the men's podium behind American champion Nathan Chen, while Kaori Sakamoto took bronze in the women's event to break up the Russian sweep of the top three spots.

That's four medals for Japan, a country known more for its speedskating than its figure skating, doubling its best from any other Winter Olympics — and the same number that Canada took home from Pyeongchang.

“Definitely after every Olympic cycle, you have people that retire that have been leaders for years, building that momentum and that notoriety,” James said. “I feel like we just need time. There's always a rebuild after the Olympics.”

Canada has not missed out on the medals entirely since the 1980 Games in Lake Placid and has earned at least one in 14 of the 17 Olympics since 1948. That includes six golds, two of them coming in Pyeongchang, when Tessa Virtue and Scott Moir added ice dance gold to the one they won in the team event before skating off into retirement.

Virtue and Moir also won ice dance gold in 2010 and team silver in 2014, giving them a record five Olympic figure skating medals. Three other skaters — Gillis Grafstrom of Sweden and Russians Evgeni Plushenko and Nikita Katsalapov — have won four apiece before a sizeable group that has won three figure skating medals, and that includes a trio of Canadian stalwarts: Radford and Duhamel, Patrick Chan and Kaetlyn Osmond.

Of all those skaters, the 37-year-old Radford is the only one still competing.

If the sport is cyclical, as Radford and James suggest, then the recent Junior Grand Prix season can gauge just how much ground Canada needs to make up. The Canadians didn't have any of the top 10 scores in the women's event — the Russians and Americans had all of them — or the pairs event, but Wesley Chiu had the sixth-highest score among men's events while ice dancers Natalie D'Alessandro and Bruce Waddell could be medal contenders by the 2026 Games in Milan and Cortina.

That is four years down the road, though. For now, the Canadian team is left to pick itself up off the ice, just as Marinaro and partner Kirsten Moore-Towers were forced to do after their crash landing in the pairs event Friday night.

“We don’t have much choice," Moore-Towers said. "Right now we’re just fresh off the ice so we’re still a bit shocked, and definitely disappointed, but we’ll bounce back. We always do. We’ll find a way for sure.”