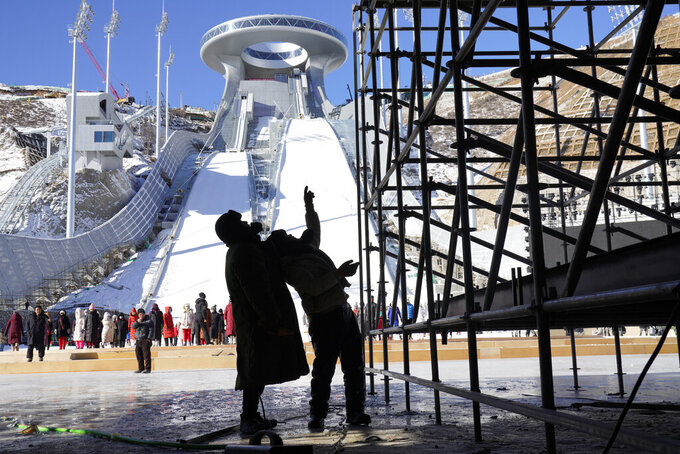 BEIJING (AP) — To stage the Winter Games in the Chinese capital, organizers embarked on a massive public works campaign, constructing new venues and piping millions of gallons of water up into the arid surrounding mountains to create fake snow for ski competitions.

And then they proclaimed these to be the most sustainable Olympics in history.

How can both these things be true?

The seeming contradiction shows the difficulties of sorting spin from genuine achievements as countries and companies seek to burnish their environmental credentials.

Even as organizations make notable progress on reducing the harmful effects of their operations, experts say sustainability claims can be overstated and mask underlying problems. In China, verifying claims can be especially difficult because of the lack of transparency.

A look at what sustainability claims can and can't tell us.

HOW IS SUSTAINABILITY MEASURED?

Sustainability is a broad term generally referring to environmental, economic and social effects. But experts say a lack of clear, consistent measures can make it hard to know whether to trust claims around the term.

In the early 2000s, the International Olympic Committee sought to create a comprehensive evaluation to help track how organizers were progressing on sustainability goals, according to a study published last year. But the effort was eventually abandoned by host cities, in part because collecting all the necessary information was too cumbersome, the report noted.

The researchers sought to create their own method for rating the sustainability of the Games using publicly available information. Comparisons were difficult because of the lack of consistent data, but they found that sustainability actually declined with recent Olympics due to factors including the growth of the event. The 2022 Beijing Games were not included in the study.

WHAT ABOUT CARBON FOOTPRINT?

As organizations face pressure to cut back on the emissions that contribute to global warming, one measure of sustainability getting more attention is carbon footprints.

The IOC, for example, says the Beijing Olympics will be carbon neutral and that future games will be carbon positive. That might seem to defy logic when considering the massive scale of the events. But groups can claim carbon neutrality by paying to offset the emissions they create, often with the planting of trees.

Experts say offsets can be problematic because there's no guarantee they'll deliver on reducing emissions. Trees might be wiped out by wildfire or extreme weather.

“Forestation projects literally go up in smoke,” said Daniel Scott, a climate researcher at the University of Waterloo.

Many organizations are making meaningful changes to reduce their footprints. But the simplicity of carbon neutrality claims can make it hard to know what they really signify, said Harry Fearnehough, a policy analyst at NewClimate Institute, which works to fight global warming.

“It’s almost impossible for for consumers — but also for regulators, shareholders, investors — to digest this easily,” he said, adding that government guidelines could give people guidance.

WHAT IS BEIJING DOING?

Beijing organizers note the many measures they’ve taken to reduce the impact of the Games. Several arenas from the city's 2008 Summer Games are being reused for this month's competitions, and venues are being powered by renewable energy. Most the vehicles shuttling participants between sites will also be fuel-efficient.

But to achieve carbon neutrality, organizers are still relying on carbon offsets.

Marie Sallois, director of sustainability at the IOC, noted the difficulties of reducing emissions and that organizers are working to keep improving.

WHAT ABOUT OTHER IMPACTS?

The focus on carbon footprints in recent years could obscure other environmental and social issues, such as the use of natural resources and displacement of local residents for construction.

“We can get carbon blinders,” said Rob Jackson, a climate researcher at Stanford University.

In a sustainability report last month, Beijing organizers addressed some of the Games' other impacts To build the ski jump venue and the Olympic Village in Hebei province, for example, they said about 1,500 villagers who had to be relocated were given the choice of new apartments or cash.

To ensure the production of fake snow wouldn't stress water regional water supplies, the report cited measures including the recycling of wastewater and the use of reservoirs to collect rain and snowmelt. This week, organizers also noted that fake snow has become common at ski resorts. It's a practice experts say could become more common as climate change endangers winter sports.