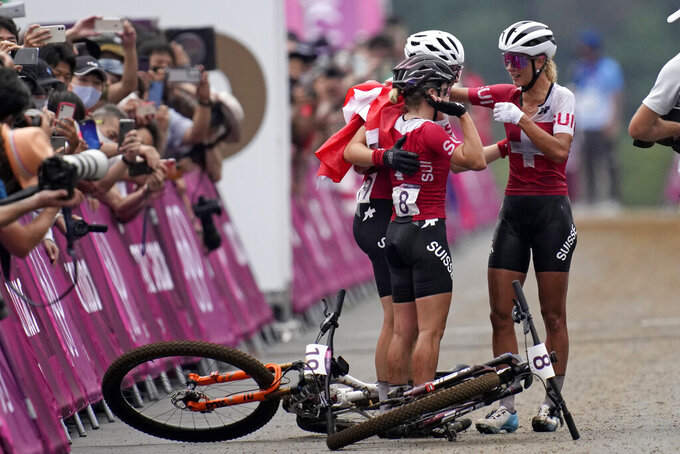 Jolanda Neff of Switzerland, right, embraces teammates Sina Frei (8) who won silver, and Linda Indergand, who won bronze, for a sweep of the podium for Switzerland, at the finish line the women's cross-country mountain bike competition at the 2020 Summer Olympics, Tuesday, July 27, 2021, in Izu, Japan. (AP Photo/Christophe Ena)

TOKYO (AP) — While it was National Day back home in Switzerland on Sunday, the Tokyo Olympic champion in women's tennis celebrated by winning a silver medal in doubles.

Back-to-back medals for Bencic, the latter with playing with partner Viktorija Golubic, added to the wave of women's success carrying the Swiss team to its biggest tally since the 1952 Helsinki Olympics.

Bencic’s title in singles late Saturday lifted the total into unexpected double figures. It increased to 12 after she and Golubic earned silver, the ninth won by women in Tokyo.

The overall tally of 14 medals won in Helsinki is in sight.

“It’s a surprise for everybody,” Swiss team leader Ralph Stöckli told state broadcaster RTS. “I hope that all Swiss people are really proud of what we’ve already achieved.”

Federer, a two-time Olympic medalist, was a late withdrawal, so the 12th-ranked Bencic stepped up to reach both her finals.

A nation of fewer than 9 million people is far ahead of Brazil and Spain in the medals table. With three golds already, Switzerland has beaten the two titles won in 1952, both in men's gymnastics.

Even when Swiss women did not reach the podium, they delivered performances barely imagined before the Games.

The women’s 100-meter final Saturday featured more Swiss women than American. Ajla Del Ponte and Mujinga Kambundji, running side-by-side in the outside lanes, both went under 11 seconds to place fifth and sixth in a race swept by Jamaicans.

The men also made Swiss history among their three medals earned through Sunday, which is 730 years since the alliance that created the national confederation in 1291.

The Alpine nation had only one swimming medalist in Olympic history — a bronze from the 1984 Los Angeles Games — before Tokyo. It has two more now, thanks to Jérémy Desplanches in the 200-meter individual medley and Noè Ponti in the 100 butterfly.

“It’s almost the performance we normally have in Switzerland during the Winter Olympics,” Stöckli said of a Swiss team that won five golds and 15 total medals at the 2018 Pyeongchang Games.

Maybe this success will help reignite national enthusiasm for hosting a Winter Olympics for the first time since 1948. Public rejection at the ballot box ended potential Swiss bids centered on St. Moritz and Sion for the 2022 and 2026 Olympics.

Asked Sunday about a possible candidate for 2030, the IOC’s executive director for the Olympic Games, Christophe Dubi of Switzerland, said: “We have not reached out to them.”

Dubi said Swiss Olympic officials are working on a long-term strategy that could be announced before the 2022 Winter Games open in Beijing.