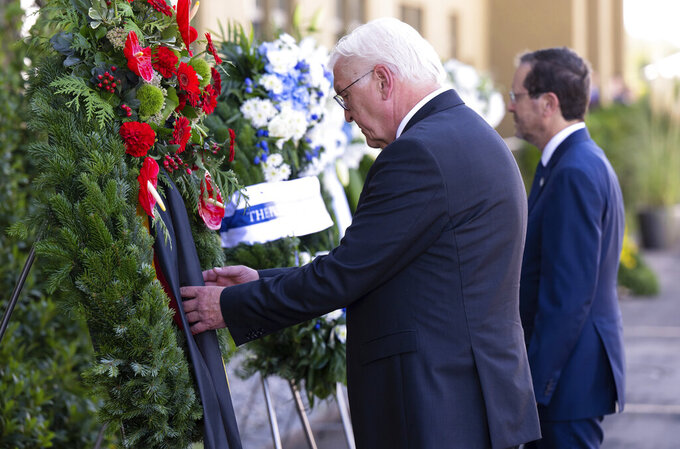 German President Frank-Walter Steinmeier, left, and Israeli President Isaac Herzog, right, attend a wreath laying ceremony to commemorate the victims of the attack by Palestinian militants on the 1972 Munich Olympics in Fuerstenfeldbruck near Munich, Germany, Monday, Sept. 5, 2002. The German and Israeli presidents are to join relatives of the 11 Israeli athletes killed in the attack by Palestinian militants on the commemoration event. (Sven Hoppe/dpa via AP)

BERLIN (AP) — Germany's president apologized Monday for multiple failures by his country before, during and after the 1972 attack on the Munich OIympics as he joined his Israeli counterpart and relatives of the 11 Israeli athletes killed by Palestinian militants at the games 50 years ago.

The anniversary ceremony at the Fuerstenfeldbruck airfield outside Munich — the scene of a botched rescue attempt that left nine of the Israeli athletes, a West German police officer and five of the assailants dead — came days after an agreement ended a long dispute over compensation. German President Frank-Walter Steinmeier and Israeli President Isaac Herzog laid wreaths at the site.

Last week's agreement headed off a threatened boycott of the anniversary event by relatives of the slain athletes. They will receive a total of 28 million euros (dollars) in compensation, a significant increase from the initial 10 million-euro offer.

As part of the agreement, Germany agreed to acknowledge failures by authorities at the time and to allow German and Israeli historians to review the events surrounding the attack.

“We are talking about a great tragedy and a triple failure,” German President Frank-Walter Steinmeier said. “The first regards the preparation of the games and the security concept; the second the events of Sept. 5 and 6, 1972. The third failure begins the day after the attack: the silence, the denial, the forgetting.”

Ankie Spitzer, the widow of fencing coach Andre Spitzer, said in remarks addressed to her late husband that “although we have finally, after 50 years, reached our goal, at the end of the day you are still gone and nothing can change that.”

“Everybody is asking now if I finally feel closure,” she said. “They don't understand that there will never be closure. The hole in my heart will never, ever heal.”

Before dawn on Sept. 5, 1972, eight members of a Palestinian group called Black September clambered over the unguarded fence of the Olympic village. They burst into the building where the Israeli team was staying, killing wrestling coach Moshe Weinberg and weightlifter Yossi Romano.

Some Israeli athletes managed to escape but nine were seized. The captors demanded the release of more than 200 Palestinians held by Israel and two German left-wing extremists in West German prisons.

The attackers demanded a plane and safe passage to Cairo. After a day of tense negotiations, the assailants and their hostages were allowed to leave aboard two helicopters for Fuerstenfeldbruck.

Sharpshooters at the airfield opened fire. The attackers threw a grenade into one of the helicopters carrying hostages, which exploded, and shot the hostages in the other helicopter.

The Olympics were put on hold for 34 hours but then resumed, with then International Olympic Committee chief Avery Brundage insisting that “the Games must go on."

Steinmeier acknowledged that the politicians of the day also “did everything to return to business as usual as quickly as possible.”

“We cannot make up for what happened, or for what you experienced and suffered in the way of resistance, ignorance and injustice,” Steinmeier told the victims' relatives. “That shames me.”

“As this country's head of state and in the name of the Federal Republic of Germany, I seek your forgiveness for the inadequate protection of the Israeli athletes at the Olympic Games in Munich and for the inadequate resolution afterward; for the fact that what happened could happen,” he said.

The compensation settlement includes payments already made. Immediately after the attack, Germany made payments to relatives of the victims amounting to about 4.19 million marks (about 2 million euros or dollars), according to the country’s interior ministry. In 2002, the surviving relatives received an additional 3 million euros, Germany’s dpa news agency reported.

Steinmeier noted that the Palestinian militants and their Libyan helpers were directly responsible for the killings, and said it is “very bitter that no word of sympathy, no word of regret comes from political representatives of those countries today."

During a recent visit to Berlin, Palestinian President Mahmoud Abbas caused outrage by refusing to condemn the 1972 attack and saying that he could point to “50 Holocausts” by Israel.