Given a chance, Lynn Williams provides boost for US soccer 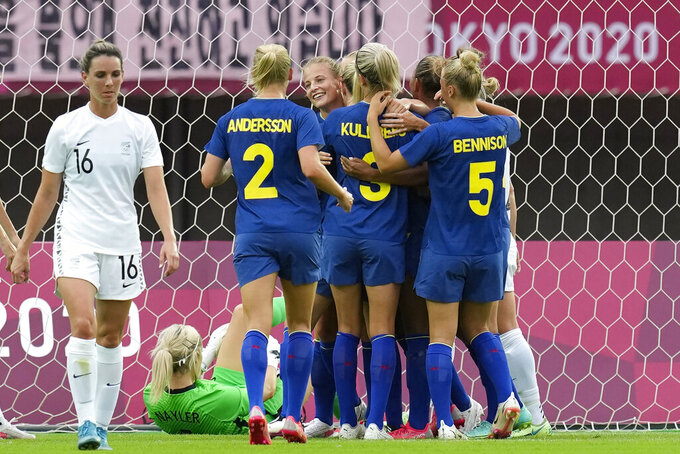 Sweden's Anna Anvegard celebrates with her teammates after scoring on a header against New Zealand during a women's soccer match between New Zealand and Sweden at the 2020 Summer Olympics, Tuesday, July 27, 2021, in Rifu, Japan. (AP Photo/Andre Penner)

TOKYO (AP) — A last-minute rule change because of the pandemic cleared the way for one-time alternate Lynn Williams to earn an Olympic start.

Then she proved she belonged all along.

Williams not only started for the U.S. women's soccer team in its tense quarterfinal with the Netherlands, she scored and added an assist. The Americans earned a spot in the semifinals 4-2 on penalties after a 2-2 draw.

“I think that this team thrives under pressure and myself, I had nothing to lose. I came here as an alternate so I just went out there and said, 'You know what? Try to make a difference. Do what you can do,'" Williams said. ”I was just so excited to get out there and play."

The U.S. team, which is vying for a fifth Olympic goal medal, faces Canada in Kashima on Monday.

Williams was originally selected by coach Vlatko Andonovski as one of four alternates to his 18-player Olympic squad.

Under normal circumstances, an alternate could be called onto the team during the competition in the event of an injury, and the injured player could not return.

But Dutch coach Sarina Wiegman was among those who appealed to include alternates on the full rosters, because the coronavirus pandemic had impacted the preparation of many teams.

New Zealand's team had not been able to play together since March 2020 in the run up to the Tokyo Games. Zambia had an Olympic tune-up scheduled with Britain that had to be canceled because of COVID-19 restrictions.

FIFA, soccer's international governing body, and the International Olympic Committee approved the roster expansion for the tournament. Only 18 players are available for each match in Tokyo, but coaches can choose from all 22 players.

That meant Williams was a full-fledged Olympian.

“When I was named an alternate, obviously not the position I wanted to be in, but to be one of the 22 people here in Tokyo, I feel so incredibly honored and blessed,” she said. “I go out to training every single day and I look at my teammates, and I get amazed because of how good they are.”

There's no telling whether Williams will start for Monday's match against Canada, a familiar foe. Coach Vlatko Andonovski has been creative with his lineups during the compact tournament.

The Americans defeated the Canadians in the final match of the CONCACAF Olympic qualifying tournament, which was held before the coronavirus swept the U.S. in March 2020.

The previous Olympic meeting was back in 2012, an epic and controversial semifinal match that went to overtime. Canadian star Christine Sinclair scored three goals, but the United States won it in the 123rd minute on Alex Morgan's header.

The controversy stemmed from questionable calls, including a rare six-second violation against Canadian goalkeeper Erin McLeod late in regulation.

On the free kick, the Canadians were penalized by a hand ball and U.S. striker Abby Wambach scored on the penalty to tie the game at 3-3 and send it into extra time.

Canadian midfielder Desiree Scott was on that 2012 team.

“I think all of us remember that 2012 match. What an incredible semifinal. For this, our team is completely different now I would say. I think we’ve developed as a program, as the people who are on the field, the sort of brand of soccer that we play, has really evolved," Scott said.

"Now we’re an attacking threat. We’re not just that defensive Canadian grit team that you would expect in 2012 where we would hope for transition, or we would be hopeful relying our defensive game. We now have attack and defense going both ways and we’re, we’re just a more confident group."

Canada advanced in this tournament 4-3 on a penalty shootout after a scoreless draw with Brazil.

In the other semifinal Monday, Australia plays Sweden in Yokohama. The Swedes, Australia and the United States were all in the same group during the preliminary stage.

As a result, Sweden has already played Australia earlier in the tournament, winning 4-2. Fridolina Rolfo scored a pair of goals for Sweden, and Sam Kerr had a pair for the Matildas.

Kerr, who plays professionally for Chelsea, is the leading scorer left in the tournament with five goals. Dutch striker Vivianne Miedema scored 10, but her team was eliminated by the United States in the quarterfinals.

Sweden, which went to the final match of the 2016 Olympics but fell to Germany, beat the United States 3-0 to open the tournament in Tokyo, handing the Americans their first loss after a 44-game unbeaten streak. After finishing atop its group, Sweden eliminated host Japan 3-1 in the quarterfinals.

The Australians topped Britain 4-3 to reach the Olympic semifinals for the first time.