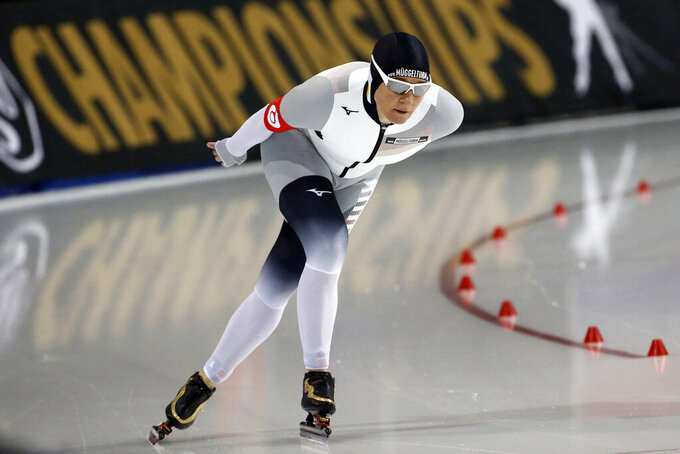 FILE - Germany's Claudia Pechstein competes in the women's 5,000 meters during the world single distances speedskating championships Saturday, Feb. 15, 2020, in Kearns, Utah. At 49, Pechstein will be the oldest woman to compete at a Winter Olympics and the second athlete — and only woman — to compete in eight. (AP Photo/Rick Bowmer, File)

The 49-year-old German will become the oldest woman to compete at a Winter Olympics in Beijing and the second athlete — and only woman — to compete in eight Winter Games.

“Almost everybody say to me, ‘It’s amazing you’re still competing on this level. It’s crazy,’” she said. “I like skating.”

Pechstein will tie Japanese ski jumper Noriaki Kasai for participating in the most Winter Games.

She’ll surpass Anne Abernathy, a luger from the U.S. Virgin Islands who was 48 at her fifth Olympics in 2002. Abernathy was injured during practice at the 2006 games and didn’t compete.

Pechstein, a five-time Olympic champion, qualified in the mass start, an event that debuted four years ago in Pyeongchang and features up to 24 skaters racing 16 laps at the same time. It features all-out sprints, jockeying for position and tactics, which a veteran like Pechstein knows plenty about.

The owner of nine Olympic medals turns 50 on Feb. 22, two days after the closing ceremony.

“Every day is harder to get motivated, especially when you feel not so great and the results aren’t coming along,” she said, “but I’m still proud of myself. I can still compete with the world’s younger girls.”

Many of her competitors weren’t born when she won her first Olympic medal, a bronze at the 1992 Albertville Games, the first after the fall of the Berlin Wall. She’s a remainder of the old East German sports machine, having grown up on that side of the wall and competed as a teenager.

In 2009, Pechstein was banned for two years by the International Skating Union because of irregularities in her blood profile. The suspension was not based on a positive test, but the ISU found her blood values to be indicative of doping use.

Pechstein denied the accusations then, as she does to this day.

“I don’t do anything forbidden,” she said. “I can look in the mirror every morning.”

She lost her appeal and served the ban, with her reputation taking a major hit.

She returned to the ice in 2011, but her court fight is still going on. She believes the arbitration process is unfair to athletes, who are required to sign agreements that force them to take their cases to the Court of Arbitration for Sport. In doing so, athletes waive their rights to bring their cases to courts in their home countries, and Pechstein believes that is unjustified. She also wants her ban overturned.

In 2016, she lost her case in Germany’s highest civil court. She refused to give up, and took her fight to Germany’s federal constitutional court.

“I never give up. I still fight for my right,” she said. “I go for European court, if it’s necessary.”

Pechstein points out that if not for missing the 2010 Vancouver Olympics because of the ban, she’d be at her ninth games in China.

“They make a really big mistake and they know it,” she said of the ISU.

Pechstein last won an individual World Cup title in December 2017, the oldest woman to do so.

“It’s not easy with this in the head always,” she said, referring to her court battles.

Pechstein is a federal police officer in Germany, where her partner, Matthias Grosse, is president of the German Speed Skating Association. They met after he emailed her in 2009 offering his support.

Her longevity and results command respect among the much younger set.

“I think it’s really good for her that she’s doing it and she likes it,” Dutch skater Femke Kok said. “Why not?”

Pechstein is a long shot to medal in Beijing, yet just making it there represents a victory.