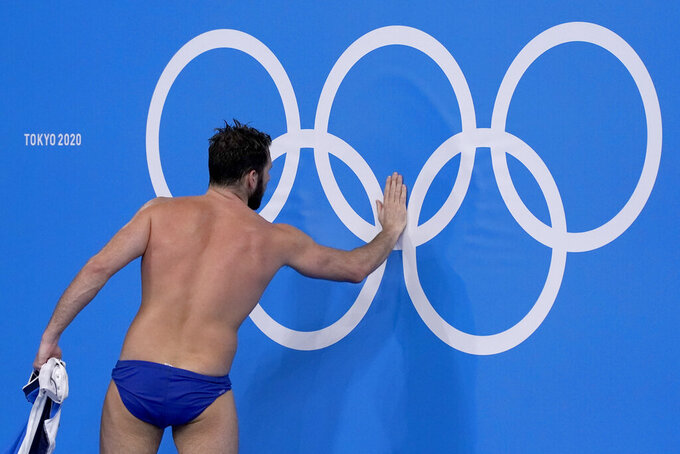 Greece's Konstantinos Genidounias touches the Olympic rings as he leaves the pool after a win over Hungary in a semifinal round men's water polo match at the 2020 Summer Olympics, Friday, Aug. 6, 2021, in Tokyo, Japan. (AP Photo/Mark Humphrey)

Greece has won its first men’s water polo medal at the Olympics. The only question now is silver or gold.

“History has been written. This is history for Greece,” Genidounias said. “The only thing that remains is to see if it's gold letters or silver letters.”

Serbia also advanced, staying in the mix for a second straight gold medal with a bruising 10-9 victory over Spain. Each team had three players foul out.

Mandic scored a power-play goal before Stefan Mitrovic tied it at 8 with 2:20 left. It was tied at 9 when Filip Filipovic connected from long range with 26 seconds remaining, punctuating the clutch throw with a massive yell that reverberated throughout Tatsumi Water Polo Centre.

Spain had one last chance, but Marc Larumbe Gonfaus turned it over and Serbia ran out the final seconds.

Spain had won its first six games in Tokyo, including a 13-12 victory over Serbia on the first day of group play on July 25.

“We are sad, but we need to stand up and think on the (bronze medal) game against Hungary,” captain Felipe Perrone said.

The 34-year-old Filipovic finished with two goals. He was the MVP when Serbia won gold for the first time in Rio de Janeiro, and he remains one of the world's most dangerous players in his fourth Olympics.

“This win we achieve because we believe until the last second,” he said. “We knew that we can win this game. We're a better team than Spain.”

Playing for the 16th time in the oldest team sport at the Olympics, Greece improved to 6-0-1 with its fifth straight win since a 6-6 draw against Italy during group play. It also beat Hungary 10-9 in its first game in Tokyo on July 25.

Greece's previous best finish was fourth at the 2004 Athens Games.

“I think that we cannot stop here,” Greece coach Theodoros Vlachos said. “We have to fight like crazy in the final. We want to hear our anthem at the end.”

Krisztian Manhercz scored two goals for Hungary, and Viktor Nagy made eight saves. Hungary shot 22% (6 for 27) in its first loss since the opener against Greece.

Hungary is the winningest program in men's water polo with nine golds, but it hasn't won a medal since its run of three straight Olympic titles from 2000 to 2008. It finished fifth in London and Rio de Janeiro.

“To be honest, never in my wildest dreams would I have thought that Greece can beat us twice during one tournament," Hungary captain Denes Varga said.

“I thought that we made a step forward and were able to make the difference, but they were impeccable, hands down. I wish them to win the final.”

The game was tied at 5 after Manhercz scored with 6:32 left. But Ioannis Fountoulis responded for Greece and Angelos Vlachopoulos' power-play goal made it 7-5 with 5:07 remaining.

Dimitrios Skoumpakis helped close it out with a terrific shot from long range, making it 9-6 and kickstarting the celebration in Greece's corner of the pool.

“I think Hungary has some legends inside its roster. We had, I think, more passion, more will to win,” Zerdevas said. “I think that games don't have tactics, they have heart, and I think that today we were better. It was our day.”