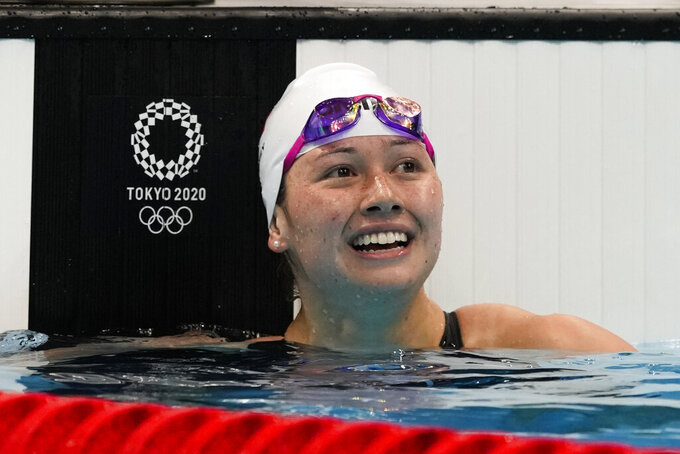 TOKYO (AP) — Siobhán Haughey had already made history at the Tokyo Olympics. Then she went out and burnished her legacy in the pool.

The 23-year-old swimmer from Hong Kong earned a silver medal in the 100-meter freestyle on Friday, to go with the silver she won in the 200 free two days earlier. They are the first swimming medals won by Hong Kong.

“This is crazy and surreal,” Haughey said. “The 200 free is always my main event, so the 100 is more like a bonus for me. My goal is just to go in and have fun and swim a best time and I did that."

“I didn't have a lot of experience going into this race,” Haughey said. “I went another best time. It's so surreal.”

Hundreds of people crowded a shopping mall in Hong Kong on Friday to watch Haughey. Her two silvers are among six medals won by the country since it first competed in the Summer Games in 1952.

“I’m just here having a good time,” she said, “and if that also means having great results it is so much fun.”

Haughey withdrew from the semifinals of the 50 free on Saturday morning because of a hip injury, according to her coach, Rick Bishop. He said it first bothered her during the 100 free, but she kept going. She finished 15th in the 50 free prelims.

In the 200 free, Haughey finished second to Ariarne Titmus of Australia, the 400 free champion in Tokyo.

“That was a hell of a tough one,” Titmus said. “I knew Siobhan really wanted this, so I knew it would be tough to beat her.”

Five years ago in Rio de Janeiro, Haughey finished 13th in the 200 free. She has won multiple medals at the Asian Games, East Asian Games, and Summer Youth Olympics.

“I feel like I was always so close,” she said, “so now finally being able to medal means so much.”

Born four months after Britain handed the sovereignty of Hong Kong back to China in 1997, she was raised there until leaving for the U.S. to attend the University of Michigan. She graduated in 2019 with a psychology degree and was a 15-time Big Ten Conference champion.

Haughey paired blue Michigan shorts with her cream Hong Kong team jacket to attend the medalists' news conference. She answered several questions in Cantonese, one of three languages she speaks fluently, along with Mandarin and English.

Her father, Darach, is Irish and her mother, Canjo, is from Hong Kong. Her late great uncle was Charles Haughey, a three-term Irish prime minister.

Haughey continued training at Michigan until the coronavirus pandemic began last year, when she returned to Hong Kong. Her U.S.-based coach emailed her training sets daily.

Her second Olympics is teaching Haughey such high-level intricacies as how to recover between races, manage stress, and reset her emotions between events.

“It definitely gives me even more confidence moving forward knowing that I can compete with the best in the world,” she said. “There's a lot to learn from this experience.”