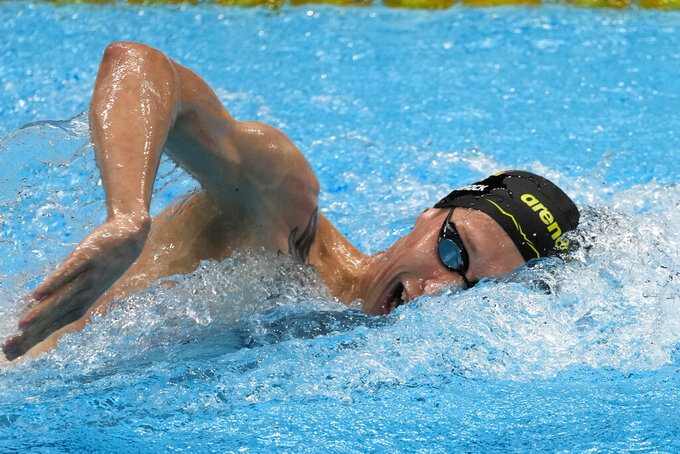 Marathon swimming at the Tokyo Olympics is as much a test of mental endurance as it is physical conditioning over a 10-kilometer course. The outcome is often decided by weather and water conditions, as well as strategy and a furious sprint to the finish.

“I think the 10k race will be slow at the start and maybe it will be like a 500-meter sprint at the end,” said Florian Wellbrock of Germany, the current world champion. “It will be a tough race with the high temperature of the air.”

Varying conditions appeal to marathon swimmers because of the challenges they present. But the potential for dangerous air and water temperatures had some swimmers, coaches and federations urging Olympic organizers to move the races from Tokyo Bay to a cooler location.

The capital's heat and humidity has already affected other sports during the Tokyo Games. But no change was made.

Instead, organizers moved the start times up to 6:30 a.m. hoping to beat the heat. That’s about 1 1/2 hours after sunrise in Tokyo, when the temperature is often already at 80 degrees Fahrenheit (27 degrees Celsius) and climbing.

The women’s 10k is Wednesday, when the forecast calls for 91 degrees F (33 degrees C) and partly cloudy skies. Conditions for the men are expected to be a few degrees warmer with full sun on Thursday.

To prepare, Wellbrock said, “we spend a lot of time in the hot tub at home.”

The 23-year-old German said he doesn’t believe the earlier start will help much. Wellbrock plans to rise about 3 a.m., eat breakfast and drink two or three coffees to get energized.

Gregorio Paltrinieri of Italy trained in cold and hot water.

“I tried everything,” he said. “I’m going to have to drink a lot during the race.”

Water and feeding stations on the course keep the swimmers fortified during the six-lap race. Coaches use cups attached to poles to pass to their athletes as they swim by the pontoons. To avoid losing time, swimmers continue to churn along as they eat and drink, tossing the cups when they’re done.

American swimmer Haley Anderson competed in a test event in Tokyo Bay in August 2019, where sweltering conditions prevailed. She dropped out less than a quarter of the way through the 10k race.

The 2016 Olympic races were overshadowed by pollution off Copacabana Beach in Rio de Janeiro.

In Rio, a dozen swimmers entered the final 100 meters together in the men’s race. Ferry Weertman of the Netherlands and Spyridon Gianniotis of Greece broke away from the pack and ended up with the exact same finishing time. A photo finish showed Gianniotis was in the lead, but Weertman slapped his hand on the overhead timing panel first to take the gold.

Weertman is back to defend his title, along with Rio bronze medalist Marc-Antoine Olivier of France. Wellbrock earned a bronze medal in the 1,500-meter freestyle in the pool in Tokyo.

Also competing is five-time world champion Ana Marcela Cunha of Brazil; Anderson, the 2012 Olympic silver medalist; and Xin Xin of China, who was fourth in Rio.