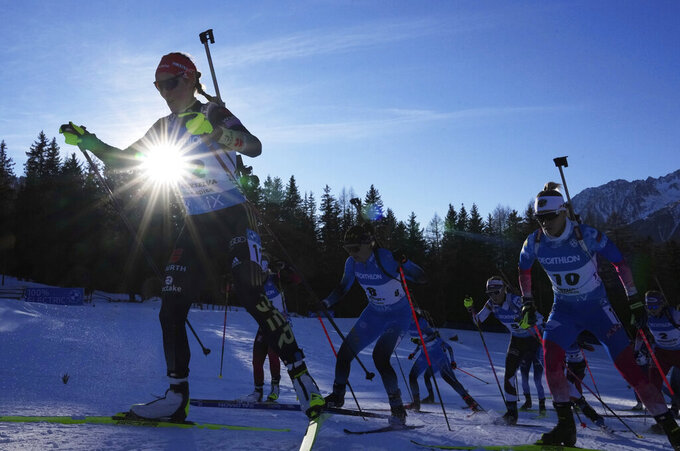 ZHANGJIAKOU, China (AP) — With a change of sport came a change in medals. An upgrade, really, from bronze to gold.

And it took eight years.

Denise Herrmann won the oldest and longest biathlon event — the 15-kilometer individual race — on Monday at the Beijing Olympics, missing only one of 20 shots on the range.

Eight years ago at the 2014 Sochi Games, the German won a bronze medal in cross-country skiing.

“I’m super proud that I have two medals in two kinds of sports,” Herrmann said. “It’s super amazing. Cross-country skiing is also cool, but biathlon is more so. Sometimes it’s a thrilling race.”

Herrmann won Monday's race in 44 minutes, 12.7 seconds, finishing only 9.4 seconds ahead of Anais Chevalier-Bouchet of France. That seems like a lot of time for an Olympic event, but Chevalier-Bouchet missed her final shot on the range and had to add a 1-minute penalty to her overall time.

Marte Olsbu Roeiseland of Norway, the overall World Cup leader and one of the most consistent shooters on the circuit, finished only 15.3 seconds behind Herrmann but uncharacteristically missed two shots — one prone and one standing. That added two minutes to her time.

The women raced over 15 kilometers in five ski loops, shooting twice in the prone position and twice standing between each lap. In all other biathlon events, they ski a 150-meter loop for each missed shot, which takes about 20 seconds. But in the individual race, one minute is added for each miss, making shooting accuracy especially important.

Eleven other biathletes only had one miss and two cleared all their shots, but Herrmann’s ski speed secured the victory.

Chevalier-Bouchet’s second-place finish earned her a second silver medal at the Beijing Games. She was part of the four-person French team that finished just behind Norway on Saturday in the mixed relay.

“Now I’m free of every result,” Chevalier-Bouchet said. “When I went there I wanted a medal in a relay and an individual medal and after two races I’ve got two.”

Roeiseland had been the favorite after seven World Cup victories this season. But those misses cost her two minutes.

“When you race you don’t know anything before the coach tells us or you see the results list,” the Norwegian said. “I thought after the finish line, ‘This is not going to be a medal,’ because it’s 18 hits and I thought maybe someone would hit 20 or 19, so I was a bit surprised that it was enough for me.”

Roeiseland also has two Olympic medals in two races at the Beijing Games after being part of the gold-winning Norwegian mixed relay team.

Another Olympic cross-country skier who recently switched to biathlon, Stina Nilsson, did not compete in Monday’s race.

Some of the biggest obstacles on the biathlon range — strong wind and frigid temperatures — were less of a factor on Monday. Temperatures hovered around minus-10 degrees C (14 degrees F), compared to minus-15 C (5 F) for Saturday’s mixed relay. The winds calmed from around 15 kph (9.3 mph) to around 5 kph (3 mph).

Defending Olympic champion Hanna Oeberg of Sweden had three misses in her standing shooting and finished 23rd, 2:23.1 behind. Marketa Davidova of the Czech Republic, the leader in the World Cup individual standings, also missed her last shot and finished sixth, 31.9 seconds behind Herrmann.

“I think it was just my mistake. It was nothing special,” Davidova said of missing the last shot. “I was trying to do what I did in the 19 shots before, but one goes up so one miss, and it’s quite a lot in this race today.”

The Americans came the closest they ever have to reaching an Olympic podium in biathlon when Deedra Irwin finished seventh with only one miss, 1:01.4 behind Herrmann.

Herrmann’s biathlon season on the World Cup circuit has produced mixed results. The German’s only podium finish was a bronze medal in the individual race in Oestersund, Sweden.

But an Olympic gold turned things around nicely.

“It was a team competition in Sochi and today it was one of the traditionalist biathlon races you can ever have and I’m really proud of this performance and also really proud of the team behind me,” Herrmann said. “It’s years of work and, yeah, it pays off today.”