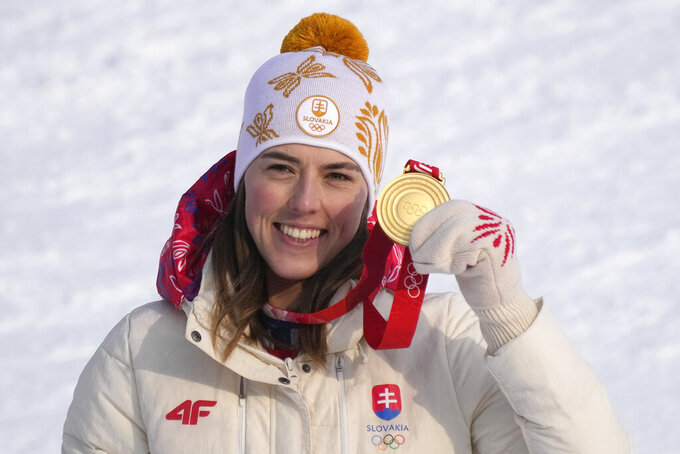 Petra Vlhova, of Slovakia celebrates during the medal ceremony after winning the gold medal in the women's slalom at the 2022 Winter Olympics, Wednesday, Feb. 9, 2022, in the Yanqing district of Beijing. (AP Photo/Robert F. Bukaty) 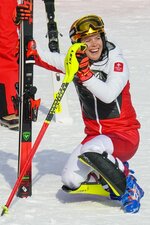 Petra Vlhova is like a different person following “something huge” that changed in her approach to skiing.

After becoming the first Slovakian to win the overall World Cup title last season following a grueling enter-every-race approach under previous coach Livio Magoni, Vlhova went one step further on Wednesday by winning gold in slalom for her country’s first ever Olympic medal in Alpine skiing.

Meanwhile, her biggest rival, two-time Olympic champion Mikaela Shiffrin, went out in the first run for her second straight race of the Beijing Games.

With the medal hanging around her neck, Vlhova pointed to a more relaxed approach under new coach Mauro Pini that provides more down time as one of the biggest reasons behind her success.

“Mauro gave me something huge, because he gave me smiles,” Vlhova said, adding that when she was tired over the last few seasons she was not happy to ski.

“Now, every single day, even if I am tired, I am happy to be back on the snow,” she said. “Laughing a lot with the team. ... Smile, enjoy the sport. ... Just to have fun and ski. This was missing last years.”

It was also Slovakia’s first medal of the Beijing Games in any sport, earning Vlhova a note of congratulations from the country’s president, Zuzana Caputova.

“I think everyone are celebrating in Slovakia,” Vlhova said. "It’s something huge.”

Vlhova, who already has clinched the World Cup slalom title, finished an unexpected 14th in the giant slalom on Monday and looked set for more disappointment when she completed the first slalom run down the Ice River course in eighth, 0.72 seconds behind leader Lena Dürr.

But last season’s overall World Cup champion made it up in the second run, with the gates set by Pini.

“Honestly, it was really difficult to be calm and focused on my skiing,” Vlhova said. “But I had a lot of power from my team. They trusted me, they believed in me and they repeated to me, ‘You are so strong. Just ski free. Enjoy and focus on your skiing, nothing else.’ They were always repeating this to me in between the two runs.

“I gave everything I had and at the end I am Olympic champion.”

Added Pini, who previously coached the Swiss men’s team then Lara Gut-Behrami and Tina Maze individually: “She left her heart on the course. That’s what I asked her to do. After that first run, there was nothing to lose. She had to be courageous and gutsy. I told her I want to see someone gutsy and with a lot of heart on that hill. And she did it. Incredible."

The 26-year-old Vlhova rushed over to hug her teammates and coach after Dürr, the last starter in the second run, crossed the line in fourth place.

The 30-year-old Dürr burst into tears when she realized she had missed out on what would have been a first medal at a major championship.

Katharina Liensberger of Austria took silver, 0.08 behind Vlhova. She had seemed set to dominate the discipline after winning the World Cup and world championship slalom titles last year but has struggled this season with illness and also contracted the coronavirus in December.

“I wasn’t sure if I could make it after all these difficult situations,” Liensberger said. “I wasn’t 100% top fit."

Wendy Holdener of Switzerland finished 0.12 behind Vlhova to add bronze to the silver medal she won in the slalom at the 2018 Pyeongchang Games.

Sara Hector looked set to continue an incredible resurgence by winning a second gold medal in three days but the Olympic giant slalom champion fell with the finish line in sight and an advantage over Vlhova of almost half a second.

“Sport is sport and anything can happen,” Hector said. “For sure it’s a little bit bitter now, but I’m super happy for the way I charged and did my best.”

When the race was over and Pini came down to the finish area he was screaming with delight before he even came to a stop. He described himself as “very, very, very, very, very, very happy” and said that feeling would last “tonight, tomorrow and for all next year, I’m sure.”

The only thing lacking for Vlhova was Shiffrin. Between them, the Slovakian (five victories) and the American (two) have won all seven World Cup slaloms this season.

“We’re sorry for the fans,” Pini said, “because a Petra-Shiffrin duel would be fun to watch.”