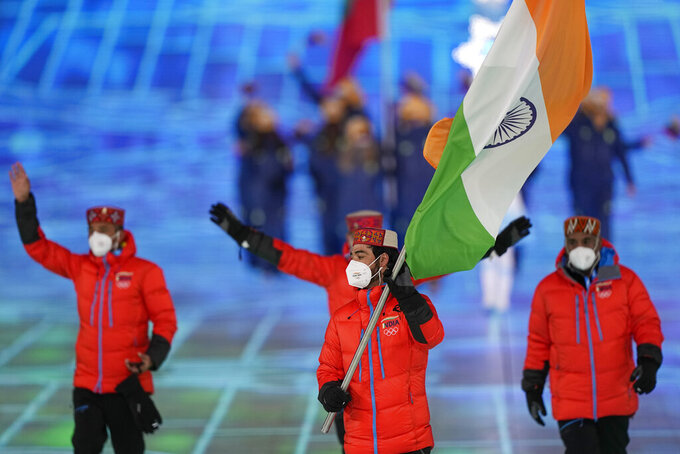 Arif Mohd Khan, of India, leads their team in during the opening ceremony of the 2022 Winter Olympics, Friday, Feb. 4, 2022, in Beijing. (AP Photo/David J. Phillip)

Indian skier Arif Khan set his sights on completing both runs of the men's giant slalom at the Olympics on Sunday, and he managed to do just that.

Khan finished nearly 38 seconds behind gold medalist Marco Odermatt — an eternity in the speedy world of ski racing. To make things tougher, the race was held amid heavy snow and with poor visibility.

“It was a bit difficult today with the weather, the snow,” Khan said. “You could hardly see what was next to the gates. The guys who go down earlier, sometimes they make those icy ruts.

“If you try to keep up with your speed and (take) some other chances, you hit a rut, you go out, as you’ve seen today. My focus was more about just finishing the race until the end, and I did it.”

Only one of the 46 skiers who completed both runs had a slower combined time than Khan – 38-year-old Benjamin Alexander, who races for Jamaica and only skied for the first time six years ago.

Eight skiers didn’t complete the second run and 33 went out in the first as snow fell for the first time during an Alpine skiing race at this year’s Olympics.

“Being less aggressive was the total strategy this time,” Khan said. “You can go fast in a race where you’re about to compete and win, but here it was more about making it down.

“I normally ski better than how I skied today, but today was representing the country, finishing the race, it was all about that.”

Khan, who will also compete in the slalom on Wednesday, is India’s only athlete at the Beijing Games and the first from the country to qualify for two events at a Winter Olympics.

“In India we have a population of 1.4 billion people and I’m being representative of all that population. It means a lot to me,” Khan said.

The 31-year-old Khan grew up in Gulmarg, Kashmir, where his father operates a tour company and ski equipment shop.

And Khan said his main goal in Beijing is to encourage people to see his hometown as a vacation spot for winter sports.

“We have high mountains, huge mountains, with gondolas and chairlifts … I’m trying to promote more about Alpine racing there.”