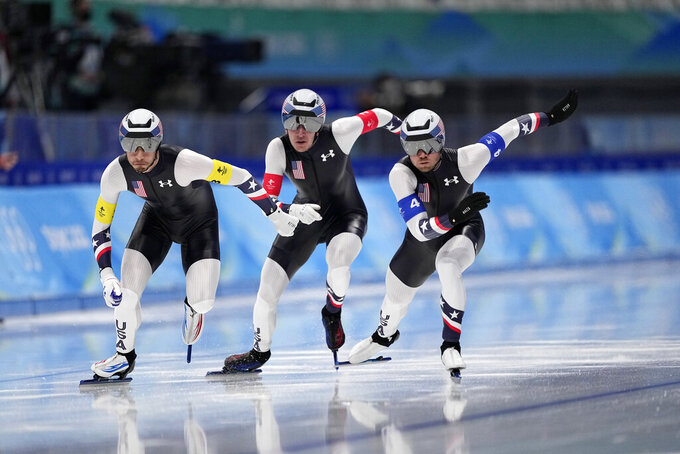 The 36-year-old American, along with Casey Dawson and Emery Lehman, earned the bronze in team pursuit on Tuesday. It was the second speedskating medal for the United States in Beijing. Erin Jackson won gold in the 500 meters.

“I feel like the weight has been lifted in a sense,” Mantia said. “Now I can just kind of breathe.”

At 36 years, 8 days, Mantia is the oldest medalist in team pursuit, breaking the mark of Rintje Ritsma of the Netherlands who was 35 years, 308 days in 2006.

It was the Americans' first medal in men’s speedskating since the 2010 Vancouver Games.

Mantia had been a favorite for gold in his first race in Beijing but finished sixth in the 1,500.

The U.S. men were gold-medal favorites in team pursuit after setting the world record of 3 minutes, 34.47 seconds in a World Cup race in Salt Lake City in December.

Mantia sat out the semifinal, when Ethan Cepuran joined Dawson and Lehman in posting the second-best time. But the Russians skated an Olympic record of 3:36.61 to advance to the final.

That left Mantia, Dawson and Lehman facing veteran Sven Kramer and the Netherlands in the B final. The U.S. won in 3:38.80, nearly 3 seconds ahead of the Dutch.

“How unlucky do you got to be that Russia goes four seconds faster in the semi than the final?" Mantia said. “The race of their lives, you can’t really be sad about that. It’s just kind of unlucky.”

Dawson was late arriving to his first Olympics after testing positive for COVID-19. When he did show up after a series of negative tests, his skates and gear did not. He competed in his first event on borrowed blades before getting his own back.

“I didn’t know I was going to get here in the first place and now I’m walking away with an Olympic medal,” Mantia said. “It's an amazing experience I've had so far.”

Four years ago, Mantia just missed the podium at the Pyeongchang Games, finishing fourth in the 1,000.

He still has that event remaining in Beijing — where he admits he’d need the race of his life to make the podium — and the mass start.

“I still feel confident in the mass start that anything can happen,” he said. “I’m definitely capable of coming away with a gold medal.”

Mantia and Jackson are former inline skaters from the same Ocala, Florida, hometown who transitioned to ice. Both describe themselves as rink rats, who spent hours at public skating sessions honing their speed on wheels.

Mantia would love nothing more than to match Jackson's gold with one of his own. Told that she no longer has anything on him now that he's got a medal, Mantia disagreed.

“I think she still does. An individual gold is pretty high up there," he said. “She can be the queen. She deserves it.”