Kentucky to release some inmates in response to coronavirus 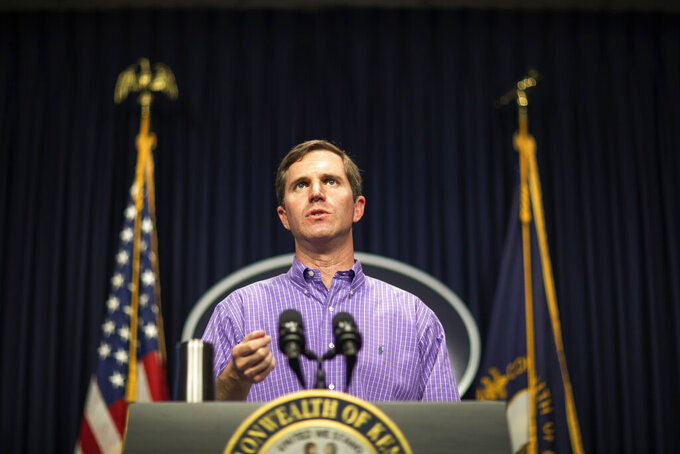 In this Sunday, March 29, 2020, photo, Kentucky Gov. Andy Beshear speaks during a news conference at the state Capitol in Frankfort, Ky., to provide an update on the novel coronavirus. Beshear announced a new order Monday, March 30 instructing Kentucky residents to avoid traveling to other states in another aggressive step to slow the spread of the new coronavirus. (Ryan C. Hermens/Lexington Herald-Leader via AP)

The governor signed an executive order to shorten the sentences of 186 inmates determined to be more susceptible to contracting the virus, said J. Michael Brown, secretary of Beshear’s executive Cabinet. The inmates were convicted of nonviolent offenses, Beshear said.

The prisoners will be screened to ensure they're not showing symptoms of the virus before their release, Brown said. Once released, they'll have to go into quarantine for 14 days, he said.

The action was one of several announced by Beshear amid another spike in the state's coronavirus cases and a double-digit increase in the death toll.

The governor asked school districts to extend school closings until early May. He halted overnight stays at state parks and announced plans to construct a field hospital large enough for at least 2,000 beds at the state fairgrounds in Louisville.

A total of 112,726 Kentuckians filed initial unemployment claims last week, the U.S. Labor Department reported Thursday. The dramatic escalation has left the state's unemployment system struggling to keep pace with the need for assistance from people suddenly out of work as businesses shut down or scale back and residents stay home in response to the virus.

The previous week, 49,023 Kentucky residents had sought jobless benefits in the state of nearly 4.5 million people. In a recent week before the virus started damaging the economy, fewer than 2,800 unemployment claims were filed in Kentucky.

Beshear recommended that school districts prolong school closings through at least May 1 because of the virus. The governor previously had asked schools to close for at least two weeks in March, then extended that closure until April 20.

“This is further sacrifice by our kids and by our educators, but it’s absolutely necessary,” he said during his daily briefing.

Most people who contract COVID-19 have mild or moderate symptoms, which can include fever and cough but also milder cases of pneumonia, sometimes requiring hospitalization. The risk of death is greater for older adults and people with other health problems.

The prisoner-release order is meant to protect prison employees and inmates, Brown said.

Nearly 750 more inmates have been identified for a second phase of releases that could occur soon, Brown said. All the inmates are within six months of completing their sentences, he said.

The inmates would face having the rest of their sentences reimposed if they commit new offenses or fail to meet other conditions once released, he said.

Beshear announced plans to construct a field hospital at the fairgrounds in Louisville as officials brace for a continued escalation of coronavirus cases.

“Our goal is to be ready when the surge comes," he said. “That doesn’t mean that we wait until we don’t have enough space and then try to put this together.”

On the economic front, like many other states, Kentucky’s unemployment benefit enrollment system has been clogged by the surging number of claims. Beshear has asked Kentuckians applying to be patient as the state contends with the crush of applications for benefits.

“We’ve received a number of complaints because we haven’t been able to move fast enough," Beshear said Wednesday. “That’s on us; it’s an unprecedented time. It’s an amount of claims that we’ve never seen before. But you know what? It’s our job to fix it.”

The state continues ramping up efforts to meet the demand for jobless assistance, said Josh Benton, deputy secretary of the state’s Education and Workforce Development Cabinet.

He said the state revamped its website offering a centralized place for information about unemployment insurance and staffing at the call center has grown dramatically.

In a Thursday tweet, Beshear urged people to complete applications online, if possible, to help the state process more claims.

The state wants to prioritize use of phone lines for people needing to update PINs or assistance filing claims, Benton said.