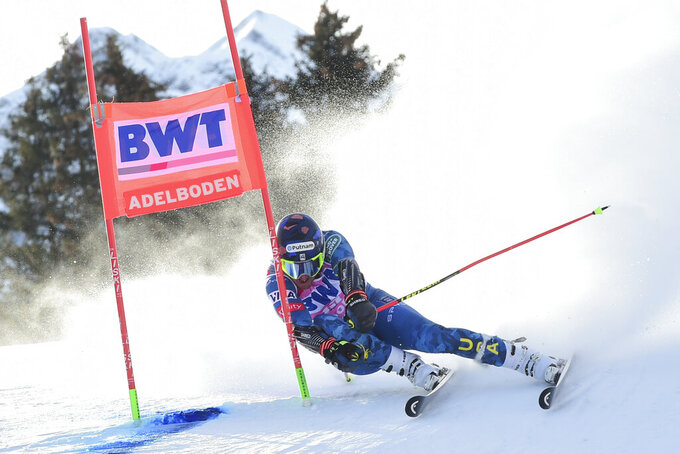 FILE - United States' Ted Ligety speeds down the course during an alpine ski, men's World Cup Giant slalom, in Adelboden, Switzerland, in this Saturday, Jan. 9, 2021, file photo. The World Pro Ski Tour starts the season this weekend with a pair of races in Steamboat Springs, Colorado. The person you're competing against could be a national team member, World Cup competitor, college standout, journeyman or even two-time Olympic champion Ted Ligety, who’s been known to make an appearance in the field. (AP Photo/Marco Tacca, File)

Most afternoons, Billy Kidd can be found gliding along the “Heavenly Daze” ski trail as he offers a free clinic with the guarantee — he always kids — that it will get them closer to the Olympics or their money back.

This weekend, the 1964 Olympic slalom silver medalist will be cruising down memory lane when a pro circuit that once featured him makes a regular stop on his home snow in Steamboat Springs, Colorado.

Fifty-some years ago, the charismatic Kidd added pizzazz to an up-and-coming World Pro Ski Tour, along with Jean-Claude Killy and later the Mahre brothers. It's a tour that took root in the late 1960s, thrived for years before disbanding in 1999 and returning in 2017.

Kidd, who's easy to spot in his distinctive cowboy hat, will definitely feel a little nostalgic when the circuit's first races of the season — first in a year due to the global pandemic — take place Saturday and Monday.

FYI: Kidd won't be joining in for old time's sake.

“I don’t even try to keep up with them anymore,” the 77-year-old cracked. “But I love everything about ski racing.”

Especially this unique tour with a format of side-by-side racing. Because the racer standing in the next gate could be a national team member, World Cup competitor, college standout, journeyman or even two-time Olympic champion Ted Ligety, who’s been known to make an appearance.

This is how it works: 32 racers earn a spot in the field based on qualifying times. From there, racers are seeded in an NCAA March Madness sort of bracket, competing next to each other along a super-slalom type course that features pro-style jumps. One run each on the red and blue courses (to keep it fair), with winner advancing based on time differential.

“It’s an opportunity for some of these racers to vindicate their skiing,” World Pro Ski Tour CEO Jon Franklin said. “To show that they belong among the elite in the world."

Back in the day, Kidd was a driving force behind an idea by the late Bob Beattie, a former U.S. ski team coach who also helped originate the World Cup ski circuit. Beattie saw an opportunity expand a pro circuit and launched what eventually morphed into the World Pro Ski Tour.

Kidd won that tour's first world title in 1970, beating Egon Zimmermann of Austria — the Olympic downhill gold medalist in 1964 — during an epic final race in Switzerland. They kept going to the start gate over and over — a dozen times, by Kidd's recollection — to determine a winner since one of them needed to win two in a row back then.

“Egon, who was a couple years older than me, graciously let me win,” said Kidd, the longtime director of skiing at Steamboat. “That's the fun thing about this: Anything can happen.”

Like last season when University of Colorado racer Max Bervy beat Ligety in a head-to-head matchup at Eldora Mountain in Colorado. Ligety was Bervy’s idol growing up. So much so that Bervy studied video of Ligety, who has 25 World Cup wins.

No trace of nerves, though, even after losing to Ligety on the first run. He beat Ligety in the second run and advanced to the next round on time differential.

“I knew where my skiing was and that I could do something cool,” Bervy said. “It’s always really good to have that, beating someone like Ted, in back of your head.”

Throughout the years, many big-name ski racers have competed on the circuit: Kidd, Killy (the French standout who captured three Olympic gold medals in '68), the late Vladimir “Spider” Sabich, and Phil and Steve Mahre, who took gold and silver, respectively, in the slalom at the 1984 Sarajevo Games.

The circuit went dormant around '99 following a sale, but re-emerged after Ed Rogers, who oversaw the tour for many years, brought it back in ‘17 with new sponsors and a television deal.

The prize money is around $10,000 for a tour-stop win. There's also about $150,000 on the line during the world championships at a date to be determined. This season's schedule has been complicated by trying to secure venues during a time of strict COVID-19 protocols.

For now, there are no separate men’s and women’s events — just one competition.

Memo to retired skiing great Lindsey Vonn: A standing offer for her to show up, should the all-time winningest female Alpine World Cup racer ever want to return. Vonn has long pushed to race against the men on the World Cup circuit, but was never permitted.

“If Lindsey Vonn would come out and race against, say, Ted, that would be international news,” Franklin said.

The names on the current tour may be familiar to racing aficionados. There's Nolan Kasper, a three-time U.S. Olympian, and Michael Ankeny, the 2015 overall and slalom NorAm champion. In last year's abbreviated season, Robert Cone took the overall title. Cone was the 2015 NCAA giant slalom champion for Middlebury College.

For some, the tour offers a chance to resurrect their career. For others, it's simply a way to have some fun.

Take Jake Jacobs, who's a chimney sweep during the summers in Glens Falls, New York, so he can earn money to travel around the circuit. The 27-year-old makes his way from competition to competition in a blue-colored van.

He’s never missed a scheduled event since the tour's return in ‘17.

“I just want to have fun and live freely,” Jacobs said.

Currently, he's living in Utah with his girlfriend and training for races by imagining giant slalom gates when he goes freeskiing.

No doubt envisioning that first win, too.

“Jake’s living the dream for everyone — of all the guys working on Wall Street and wishing they had a chance to qualify for a pro race and take on the world’s best,” Franklin said. "These are real Rocky Balboa stories.”