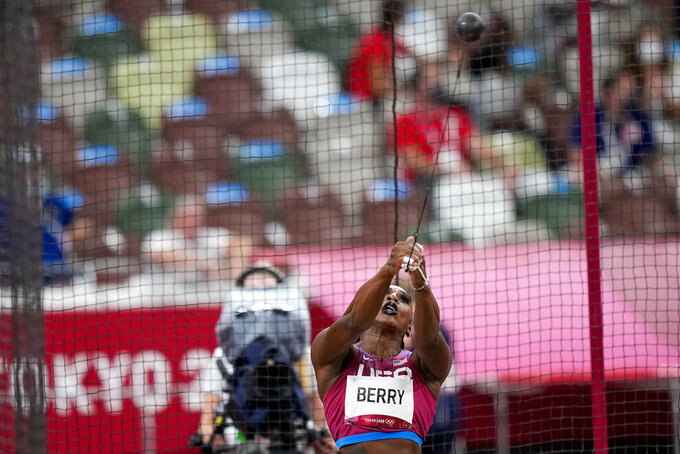 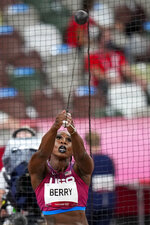 TOKYO (AP) — The stage was all hers, so Gwen Berry pounded on her chest and extended her right fist after she was introduced for the hammer throw final at the Olympics.

The meaning behind the gesture remained the same: To highlight social and racial inequities.

There will be no podium, though, to send her message to an even wider audience. She placed 11th at the Tokyo Games on Tuesday night.

Next stop for the Berry family — school.

She and her son have been offered scholarships to Tennessee State University, which is part of the list of Historically Black Colleges and Universities. She plans to get her masters in philanthropy or economics with a vision toward implementing change.

She's been front and center with her message in the lead-up to the Tokyo Games. She turned away from the flag when the national anthem played while she was on the medals stand at the Olympic trials last month.

It garnered a lot of attention. She knows that as a result many were rooting against her.

“Those people can’t step on this stage. Those people have not sacrificed anything to be here. I did,” the 32-year-old Berry said. “So all those people that are happy I failed, that’s cool, but they’re sitting on their couch watching me. So what does that tell you about them?”

Berry threw her full support behind her friend, Raven Saunders, the silver medalist in the shot put who made a small demonstration on the medal stand. Saunders lifted her arms above her head and formed an “X” with her wrists.

Asked by The Associated Press what that meant, she explained: ”It’s the intersection of where all people who are oppressed meet.”

The U.S. Olympic and Paralympic Committee said her gesture was respectful of her competitors and didn't violate the organization's rules. Berry's hoping there's no blowback from the International Olympic Committee.

“I feel like she should not be punished,” Berry said. “I hope the USOPC supports her, fights for her so that she keeps her medal and she’s supported.”

Berry laughed when she was asked if there's any chance she'll be back for the 2024 Paris Games.

“I’m tired, man. I’m tired of being away from my family,” Berry said. "I’m tired of sacrificing for this sport that don’t pay us.