The Latest: Noah Lyles wins the 200, headed to Tokyo 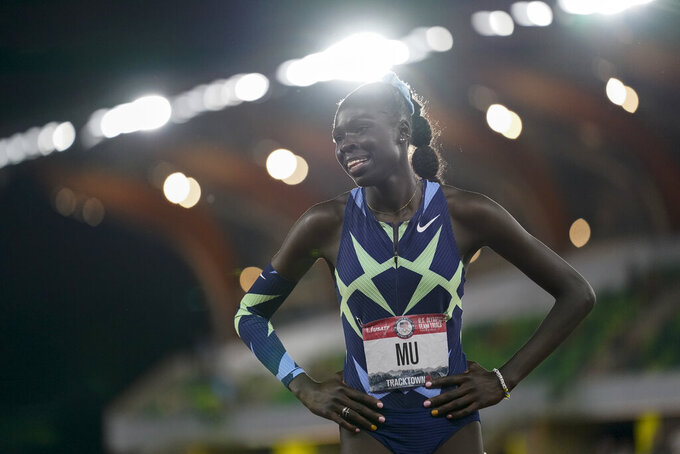 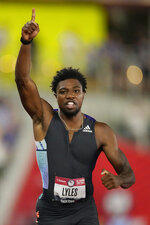 Noah Lyles won the 200 meters at the U.S. track and field trials, earning a spot on the Olympic team.

Lyles won in 19.74 seconds, the best time in the world this season. He is among the favorites to win the event in Tokyo after winning the gold medal at the 2019 world championships in Doha.

Also earning spots on the team were runner-up Kenny Bednarek, who finished in a personal best 19.78, and teenager Erriyon Knighton, who was third in 19.84.

Knighton, 17, is the youngest male track Olympian since Jim Ryun in 1964.

The trio were the final Americans to earn spots in the Olympics across 28 sports.

Oregon freshman Cole Hocker won the 1,500 meters at the U.S. track and field trials, but it was uncertain whether he’ll go to Tokyo because he hadn’t run the Olympic standard.

Centrowitz makes his third Olympic team. He won gold at the 2016 Brazil Games.

Hocker poured on the speed down the stretch, catching Centrowitz as the crowd at Hayward Field wildly cheered. Yared Nuguse also made the Olympic team, finishing third in 3:36.19.

Hocker just missed out on the Olympic standard by .28 seconds, so now he’ll wait for a ruling on whether he can compete.

He also won the NCAA title in the event just some two weeks ago, besting Notre Dame’s Nuguse, the defending champion.

Teenager Athing Mu won the women’s 800 meters at the U.S. track and field trials, earning a spot on the Olympic team for Tokyo.

The 19-year-old Mu stumbled early in the race, but recovered and pulled away from the pack down the final stretch to finish in 1 minute, 56.07 seconds. It was a meet record and the best time in the world this season.

It was also the second-fastest time in the event by an American woman.

Also earning spots on the team was runner-up Raevyn Rogers, who ran at Hayward Field while at Oregon and finished in a personal best 1:57.66, and Ajee Wilson, who finished third in 1:58.39.

JuVaughn Harrison won the long jump after taking the high jump crown earlier in the day at the U.S. Olympic track and field trials.

Harrison becomes the first American to make it in both the high jump and long jump at one Olympics since Jim Thorpe in 1912, according to Olympics historian Bill Mallon.

The LSU product jumped a personal-best 27 feet, 9 1/2 inches (8.47 meters) to win the long jump. Marquis Dendy was second and Steffin McCarter out of the University of Texas was third. Reigning Olympic long jump champion Jeff Henderson finished in sixth place.

Earlier in the day, with the temperature soaring, Harrison secured a spot on the team for Tokyo Games with a win in the high jump.

Harrison was coming off the NCAA track and field championships two weeks ago in Eugene, where he won both the high jump and long jump.

Sydney McLaughlin set a world record in the 400-meter hurdles at the U.S. track and field trials, finishing in 51.90 seconds.

McLaughlin bested the record of 52.16 set by second-place finisher Dalilah Muhammad, who crossed in 52.42. Anna Cockrell was third in 53.70. The trio will head to the Olympics in Tokyo.

After her record-breaking run, McLaughlin crouched on the track, her hand over her open mouth in disbelief.

Muhammad won the gold in Brazil in 2016. Muhammad bested runner-up McLaughlin in the 2019 world championships in Doha.

Annie Kunz won the heptathlon competition with a strong performance in the final event, the 800 meters, on a day when the race was moved to later due to the extreme heat.

Taliyah Brooks withdrew from the competition after being carted off the field in a wheelchair earlier in the afternoon as the temperature reached 108 degrees (42 Celsius) on the track.

It was 96 degrees (35.6) at the start of the seventh and final event in the heptathlon.

Kunz finished the 800 in 2 minutes, 15.24 seconds to accumulate a personal-best 6,703 points to earn a spot at the Tokyo Games. She edged 2016 Olympic qualifier Kendell Williams (6,683 points). Erica Bougard was third.

All three have the Olympic standard.

Heptathlete Taliyah Brooks withdrew from competition as the action started back up at the U.S. Olympic track and field trials after being delayed by extreme heat.

Brooks was scheduled to throw the javelin to start the evening session. She was carted off the field in a wheelchair earlier in the day as the temperature reached 108 degrees (42 Celsius) on the track. At around 3 p.m., the track announcer came onto the PA system and said action was being suspended due to the heat.

Among those still waiting to secure spots in the Olympics was Noah Lyles in the men’s 200.

Action at U.S. track and field trials was suspended and fans were evacuated from Hayward Field on Sunday afternoon as the temperature reached 108 degrees (42 Celsius) on the track.

The forecast high for was 111 degrees, but the only schedule change USA Track and Field made previous to Sunday was to move three of the weekend's distance races out of their afternoon time slots to the morning.

With the stadium filling for racing that was scheduled to begin at 4 p.m., the announcer came onto the sound system and said action was being suspended “because of extreme heat."

The heptathletes had already been in action, and had one event remaining — the 800. The men's high jump had been completed, with JuVaughn Harrison getting a victory. He was scheduled to compete in the long jump as well.

Earlier in the day, with the temperature approaching 90, Paul Chelimo won the men's 5,000.

JuVaughn Harrison, who is competing in both the high jump and long jump at the Olympic track and field trials, won the high jump Sunday to secure a spot on the team for Tokyo.

Harrison, who was a senior at LSU this past season, cleared 7 feet, 7 3/4 inches. The long jump was scheduled for later Sunday at Oregon’s Hayward Field.

Also making the Olympic team was runner-up Darryl Sullivan and third-place finisher Shelby McEwen. Just four of the athletes taking part in the event had the Olympic standard.

Harrison was coming off the NCAA track and field championships two weeks ago in Eugene, where he won both the high jump and long jump. Sullivan also competed at the NCAA meet for Tennessee.

Paul Chelimo held off a pair of rivals in a riveting sprint to the finish of a rough-and-tumble 5,000-meter race at U.S. Olympic track trials.

Down the homestretch, Chelimo drifted from the inside into Lane 4 to box out Grant Fisher and Woody Kincaid, who are teammates for the Bowerman Track Club and had already qualified in the 10K.

Chelimo won Sunday's race in 13 minutes, 26.82 seconds — only .19 ahead of Fisher and .31 in front of Kincaid. After the finish, Chelimo reached back and hugged both by the neck.

The 2016 Olympic silver medalist in the 5,000 said he had no problem using the unorthodox tactic of drifting to the middle at the end, especially considering the way the race went.

Running at or near the front throughout most of the race, he was clipped several times over the 12 1/2 trips around the track in temperatures that approached 90 degrees (32 Celsius).

“It was one of my goals, drift them all the way to the stands,” Chelimo said. “Yes, it's fair. I didn't touch anyone's hands, didn't impede anyone. When I got clipped like 10 times, is that fair?”

The 5,000 had originally been scheduled for the afternoon, but organizers moved it to a morning start due to the extreme heat. The forecast high Sunday in Eugene is 109 (43 C).

In action on the final afternoon of trials are Noah Lyles, who will try to qualify for the 200 meters, and Sydney McLaughlin and Dalilah Muhammad, who will square off in the 400-meter hurdles.