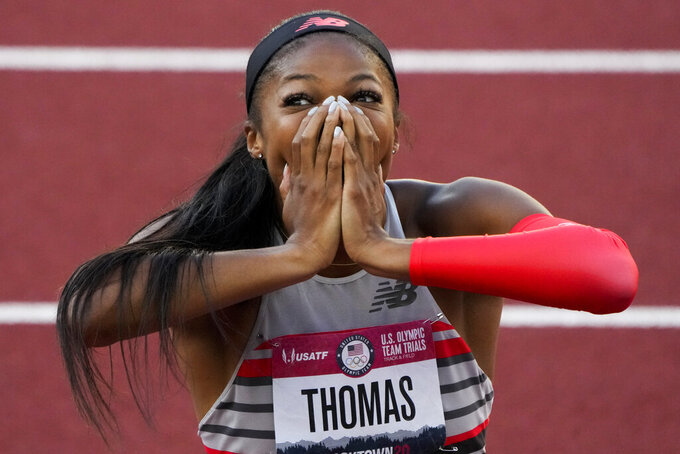 EUGENE, Ore. (AP) — The Latest on the U.S. track and field Olympic trials (all times local):

Brittney Reese made her fourth Olympic team in the long jump with a leap of 23 feet, 4 3/4 inches to win the event at the U.S. track and field trials.

Reese won gold in the long jump at the 2012 London Olympics, then took the silver at the Rio Games. She's also a seven-time world champion.

Tara Davis, fresh off of winning the NCAA long jump title in Eugene just two weeks ago, was second with a leap of 23-1 1/4 to make the Olympic squad, along with Quanesha Burks, who finished third with a leap of 22-10.

Erriyon Knighton, a 17-year-old from Florida, turned in the fastest time in the semifinal round of the men's 200 meters at the U.S. Olympic track and field trials.

He finished in a personal-best 19.88 seconds in a heat that included world champion Noah Lyles. The Adidas-backed Knighton will have a chance to earn a spot to the Tokyo Games on Sunday as the trials conclude.

Knighton broke the under-20 world record that Usain Bolt set in 2004. Bolt, the retired Jamaican sensation, has the overall world record of 19.19.

Knighton was also a wide receiver in high school. He shut down any speculation he would consider playing football in college.

“Nah,” Knighton said. “Not an option of mine to go play football.”

Grant Holloway didn’t get the world record, but he did become an Olympian.

Holloway ran the 110-meter hurdles in 12.96 seconds, finishing first in the event at the track and field trails Saturday.

Holloway ran a fast 12.81 during the semifinals, leading to speculation that he might break the world record of 12.80 set by Aries Merrit in 2012.

“Don’t ever give up,” Holloway said to the television camera after his race, the last final of the day at Hayward Field.

Hollway is the 2019 world champion in the event and the current world record holder in the 60 hurdles.

Joining him on the team for Tokyo is Devon Allen, the former Oregon football player, who ran a 13.10 for a second straight Olympic berth. Daniel Roberts was third in 13.11 to round out the team.

Gabby Thomas held off a field that included Allyson Felix with a blazing fast time to win the women’s 200 meters at the U.S. Olympic track and field trials.

Thomas finished in a trials-record time of 21.61 seconds to earn a spot at the Tokyo Games. Joining her will be runner-up Jenna Prandini and third-place finisher Anavia Battle.

Felix wound up fifth. The nine-time Olympic medalist has already made her fifth Olympics team courtesy of a second-place finish in the 400 meters. Felix received a round of applause from the Hayward Field audience after an on-track interview.

Katie Nageotte’s pole vault of 16 feet, 2 3/4 inches Saturday put her on the Olympic team for Tokyo.

Nageotte’s vault was a record at the U.S. track and field trials, as well as a personal best and the best leap in the world this season.

It will be Nageotte’s first Olympics after finishing fifth at the trials in 2016.

Also making the team is Morgann LeLeux, who finished second with a vault of 15-5, and Sandi Morris, who was third with a leap of 15-1.

Morris is the American record holder in the event and finished with a silver medal at the 2016 Olympics.

Thirty-nine-year-old Jenn Suhr, who won the gold medal at the 2012 Olympics in London after winning the silver in the 2008 Beijing Games, finished fifth and did not making the Olympic team.

Rai Benjamin won the 400-meter hurdles at the Olympic track and field trials Saturday, earning a spot on the team for the Tokyo Games.

Benjamin, the silver medalist in the event at the 2019 world championships in Qatar, set a meet record with a finish in 46.83 seconds. It was also a personal best and gave him the world-leading time this season.

Also making the team was Kenny Selmon, who finished second in 48.08 and David Kendziera, who was third in 48.38 at Oregon’s Hayward Field.

Maggie Malone won the javelin at the track and field trials to earn a spot on the U.S. team at the Tokyo Games.

Malone set a meet record with a throw of 208 feet, 4 inches at Oregon's Hayward Field on Saturday. It will be her second Olympics. She was on the 2016 team and finished 25th in the event.

Kara Winger made her fourth Olympic team with a throw of 201-8. Avione Allgood-Whetstone finished third at 193-4 but she does not have the Olympic standard.

DeAnna Price bested her own American record in the hammer throw and secured a spot on the U.S. Olympic team for Tokyo.

Price set the record at 263 feet, 6 inches. She became the first American woman with a throw over 80 meters (80.31) and just the seventh overall to throw that far.

She beat her own American record twice during the Olympic track and field trials on a steamy Saturday at Oregon’s Hayward Field.

It is also Price’s second Olympic team. She finished eighth in 2016 in Brazil. Since then, she won the gold at the 2019 world championships in Doha and is considered among the favorites heading in Japan.

Emily Sisson won the 10,000 meters at the Olympic trials in a race that was moved to earlier in the day to avoid the extreme heat.

Wearing sunglasses, Sisson pushed the pace early and no one could keep up as she finished in a trials-record time of 31 minutes, 3.82 seconds.

Sisson is headed to the Tokyo Games after not qualifying during the marathon trials in February 2020 on a cool day in Atlanta.

In the heat, she earned her place. Karissa Schweizer was second. She's now qualified in both the 10,000 and 5,000 meters. Alicia Monson took third.

The temperature at the start of the race was 85 degrees (29.4 Celsius). It was supposed to held in the early evening when the temperature was expected to reach 102 degrees (38.9). There was a water table set up on the track for the athletes.

Race walker Robyn Stevens made her first Olympic team at age 38, finishing the 20-kilometer course in 1 hour, 35 minutes, 13 seconds at the U.S. track and field trials.

Stevens retired from the sport in 2004 but returned five years ago.

Organizers moved the race up by two hours, to a 7 a.m. start, to beat the heat. Saturday’s forecast high is 102. The women’s 10,000-meter final was also pushed to an earlier start.

There are seven finals scheduled for Hayward Field this afternoon. Among those in action will be hammer thrower Gwen Berry and sprinters Allyson Felix and Noah Lyles in the 200 meters.