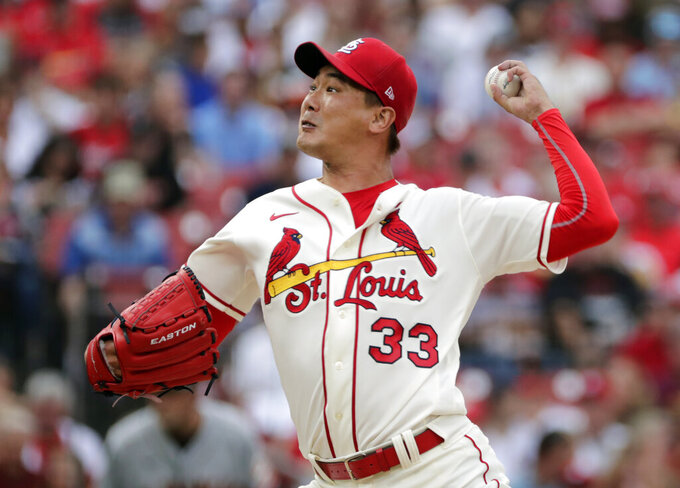 A look at what’s happening around the majors Thursday:

The 31-year-old Alvarez won a silver medal in speedskating at the 2014 Sochi Olympics.

Alvarez becomes the first baseball player to carry the flag for the U.S. The sport returned to the Olympics at the request of Japan after being absent from the previous two Summer Games.

ACE IN THE HOLE

Cardinals left-hander Kwang Hyun Kim looks to extend his scoreless streak when he faces Anthony Rizzo, Javier Báez and the Chicago Cubs at home in the finale of a four-game series. The South Korean-born Kim (5-5, 2.87 ERA) has not allowed a run over his last 21 innings, covering three-plus starts. He has permitted no more than one run in six of his past seven outings.

Kim, who has won four straight starts, went six innings to beat the Cubs 6-0 at Wrigley Field on July 10.

“He’s been huge for us,” St. Louis slugger Paul Goldschmidt said. “He gives us a good chance to win any time he’s on the mound.”

In addition to Cubs-Cardinals, two more of baseball’s biggest rivalries are in play on the same day as the New York Yankees open a four-game series at Fenway Park in Boston, and the San Francisco Giants wrap up a four-game set at Dodger Stadium.

The short-handed Yankees took two of three from AL East-leading Boston last weekend at home for their first wins over the Red Sox this year after dropping the first seven meetings. That series also was supposed to go four games before the scheduled opener was postponed for coronavirus testing and contact tracing.

The improving Detroit Tigers try for their seventh consecutive victory as they finish a four-game series against visiting Texas. Detroit has permitted a total of seven runs while matching its longest winning streak since an eight-game run in 2016.

The last-place Rangers have dropped eight in a row. They’ve been outscored 47-5 in six games since the All-Star break and have played 69 straight innings without holding a lead.

Baltimore has put pitcher Keegan Akin and outfielder Anthony Santander on the COVID-19 injured list, the latest team to have a virus setback.

Alexander Wells, who was on the taxi squad, pitched in place of Akin at Tampa Bay on Wednesday. Outfielder Ryan McKenna, who had been optioned to Triple-A Norfolk on Tuesday, rejoined the team.

“You’ve seen it a few times here with the league with other clubs,” manager Brandon Hyde said. “It’s really the first time this has happened with us and it’s unfortunate, but I saw that a couple other teams had the same sort of issue recently, and ready for it to be over.”