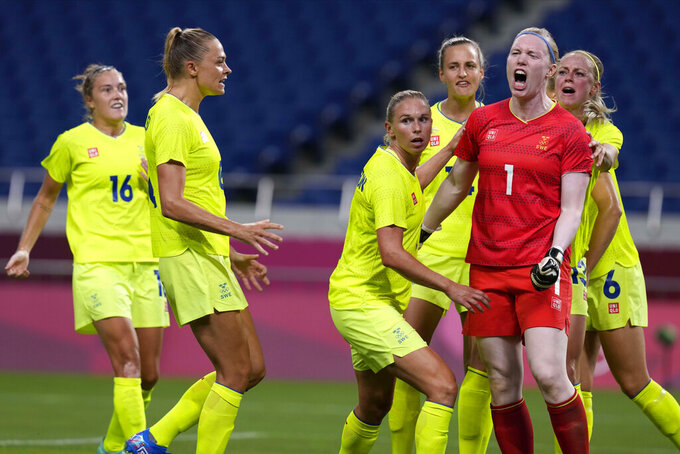 Sweden's goalkeeper Hedvig Lindahl (1) reacts as she celebrates with her teammates after stopping a penalty kick by Australia during a women's soccer match at the 2020 Summer Olympics, Saturday, July 24, 2021, in Saitama, Japan. (AP Photo/Martin Mejia)

TOKYO (AP) — Through five World Cups and five Olympics, Hedvig Lindahl has been driven by the search for success.

It’s become a draining mission the Sweden goalkeeper won't abandon before she has a winners’ medal around her neck.

“It’s getting increasingly tough,” she told The Associated Press.

She longs for the day she can finally hang up her gloves for Sweden. Beat Canada in Sunday’s Olympic soccer final and she can call it a day playing for her country at 38.

She isn’t short of medals, having won league and cup doubles with Chelsea and Wolfsburg. She's just lacking the ultimate prize with her national team. There were runner-up finishes at the last Olympics in 2016 and at the 2003 Women’s World Cup. And she’s lost semifinals at the 2011 and 2019 World Cups and at the European Championship in 2005 and 2013.

“I’ve been doing this for so many years and I’ve gotten so many chances but never really reached that final goal," she said. "So if I would stop before (winning a major title), I feel a little bit like a failure, to be honest. To win would feel like a nice crowning in a sense.”

Building up the importance of the occasion on Friday is a motivation, not a hindrance for Lindahl.

“It’s only me who puts the pressure on myself," she said. “This is an opportunity to make some history and that’s a story you tell for generations. And you need that to inspire the next generation to keep women’s football strong in Sweden."

The sense of a wider perspective comes from a home life with a wife and two children she can't wait to spend more time with. There might still be some time playing in the club game, having just come off a season with Atletico Madrid.

“There are things that are more important than football,” she said. “I’m kind of longing for that life where you can actually do whatever you want.”

For now there’s another game to focus on — the 172nd for Sweden. She kept a clean sheet in the 1-0 victory over Australia in the semifinals on Monday after only conceding three times across the four previous games at the Tokyo Olympics.

“She is a great goalkeeper — I would say one of the best that we have in the world," 36-year-old Sweden captain Caroline Seger said. “We’ve been playing for many years together and I always feel very secure with her and all the experience that she has.

“So I feel very safe when she plays. So I hope we can win a gold together. She’s been talking about quitting. So that would be nice to give her a gold."

That would, ideally, allow Lindahl to be a spectator rather than a player when the next World Cup is co-hosted by Australia and New Zealand in two years.

“If you and I talk after the final and we have a gold medal, then probably the answer is no,” she said of her prospects of playing on to the World Cup. “I feel that if we don’t win, you know, you never know.”