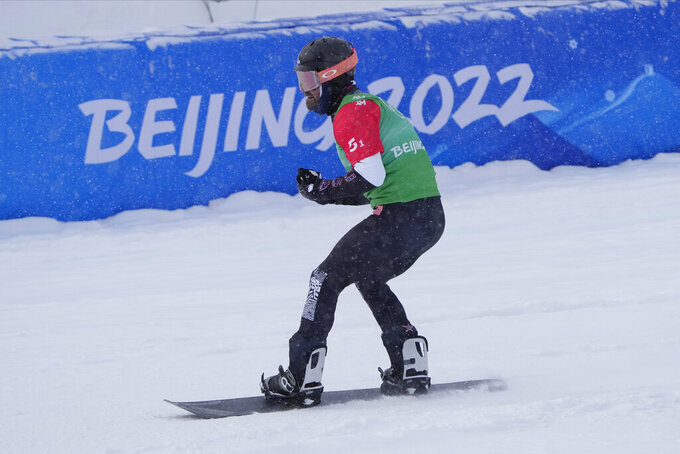 ZHANGJIAKOU, China (AP) — The running joke was American snowboardcross racer Nick Baumgartner always referring to them as a pair of 40-somethings.

For these two, and all their vast experience, age proved to be one thing — golden.

Jacobellis won her second title of the Beijing Olympics, teaming with Baumgartner to capture the new event of mixed team snowboardcross on Saturday.

At 40 years, 57 days, Baumgartner, the concrete worker/contractor from Michigan, becomes the oldest snowboarder to win an Olympic medal. At 36 years, 177 days, Jacobellis, the author of a new children's book, is the second-oldest.

“You’re never too late to take what you want from life,” Baumgartner said. “You let yourself down if you quit too early, doesn’t matter how old you are. Our success at our age is a perfect example of that.”

Jacobellis took gold earlier this week in the women’s event; it came 16 years after a late showboat move as she was cruising in for an apparent win cost her the title at the Turin Games.

“It's the internal fire in believing in yourself, whether you’re trying to go get a gold medal or just improving your day-to-day life," said Jacobellis, whose new book titled “Sochi: A True Story” is currently sold out. “You continue to try to grow and better yourself.”

After a slow start at the Beijing Olympics, the U.S. now had five gold medals and 11 overall by Saturday afternoon. Jacobellis accounted for two, while snowboarder Chloe Kim has another. The Americans have also won two new Olympic events contested at the Genting Snow Park — mixed team aerials and now mixed team snowboardercross.

Although the unique snowboarding discipline made its Olympic debut in China, the event has been featured for nearly a decade at numerous World Cup stops.

It's a competition that features a male and female rider from the same country being paired up and placed into a multi-team bracket. When the male racer crosses the line, the time advantage he holds over the next competitor is applied to his female teammate. The female rider then begins the run and the top two teams advance round by round until the final.

Baumgartner gave Jacobellis a slender lead after his run in the final. Jacobellis, of course, closed it out. They held off the Italian team of Omar Visintin and Michela Moioli by O.2 seconds. The Canadian duo of Eliot Grondin and Meryeta O’Dine finished third after O’Dine was able to scramble back up and get to the line first following an early-in the race wipeout with another Italian team. The bronze-medal winning team finished 23.20 seconds behind the time of Jacobellis and Baumgartner.

“I didn’t know if she was OK, or anything,” said the 20-year-old Grondin, the silver medalist in the men's event. "So I was just waiting and hoping she was fine and that she kept going. Then I saw her name on the split times and I said, ‘Come on.’

Shortly after Jacobellis' finish, Baumgartner went over for a gold-medal worthy embrace. Later, the American tandem grabbed hands and stepped on the podium when their names were announced.

“I always tell people that I learned a lot about myself and about my riding, once I did a team event,” Baumgartner said. “Because the vibe up at the top ... when it’s a team race, we're all smiling and we’re having fun and we’re enjoying each other’s company. We’re feeding off of each other. It brings the level of riding to a different level. You saw that today. It’s because we’re just a little less stressed and we’re having fun.”

Still, there was pressure. After all, Jacobellis didn't want to let her longtime teammate down.

“We’ve definitely been through a lot and we’ve seen each other’s ups and downs and our struggles," Jacobellis said. "So to be able to come together and work as a team, and learn from each other on how the courses were changing with speed, I thought we did great.”

The real motivation for them was simple: Showing those younger riders that age doesn't matter. Their combined age was 76, while the Italian team was 58 and the Canadians only 44.

“I think for for any athlete, getting pushed out by the younger generation is a feeling that really sucks,” said Baumgartner, whose set to give the commencement speech when his son graduates high school in May. “So for us to go out there and put a stamp of approval on it, that we’re not done yet, we've just got to work a little bit harder and we’re willing to put that work in, it’s a good feeling.”