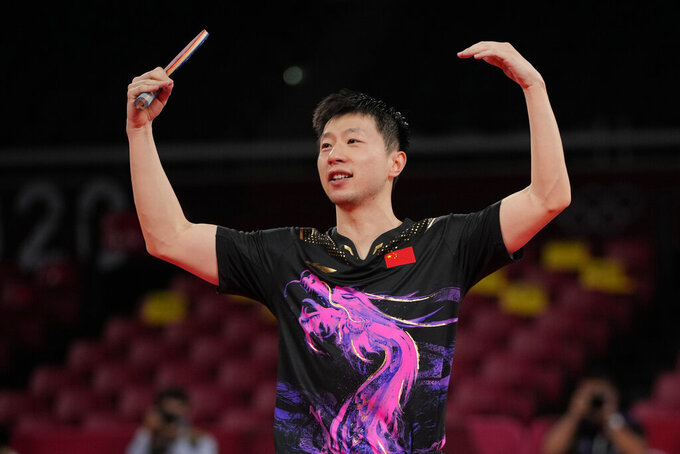 Ma Long of China makes a gesture after defeating Fan Zhendong of China during the gold medal match of the table tennis men's singles at the 2020 Summer Olympics, Friday, July 30, 2021, in Tokyo. (AP Photo/Kin Cheung)

TOKYO (AP) — For the fourth straight Olympics, Chinese men have swept the table tennis gold and silver medals in singles.

The match was filled with extraordinary exchanges that often mounted in intensity as the two men fired powerful, spinning smashes at each other, lunging for successful returns time and again. A winning point was often capped with a victory scream and a fist pump.

Between games, Ma would talk to himself as he drank water and wiped sweat from his face.

After winning the match, Ma made a heart shape with his arms. He and Fan then hoisted the Chinese flag together.

On Thursday, Chen Meng beat Chinese teammate Sun Yingsha to take gold in women’s singles. Chinese women have won every gold in singles at the Olympics.

The Tokyo Games, while once again highlighting Chinese singles supremacy, marks a letdown from the Rio de Janeiro Olympics, when China won all four gold medals in the sport. In a massive win for the host nation, Japan beat China for gold in mixed doubles.

China's singles players have proven themselves so consistently strong that the Olympic rules — with China in mind — were changed ahead of the Rio Games so each country can now only send two players for singles. That allows other nations to compete for the bronze medal.