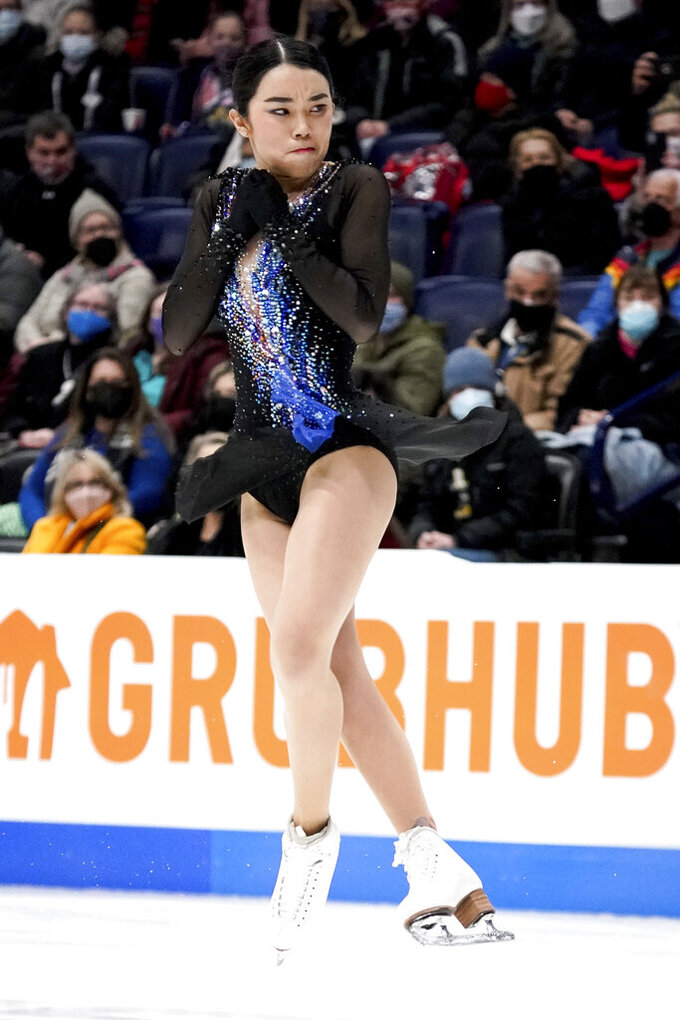 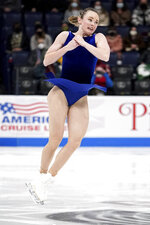 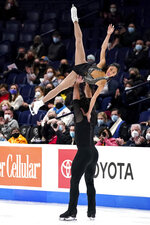 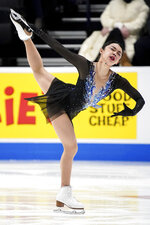 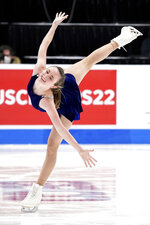 NASHVILLE, Tenn. (AP) — Mariah Bell remembers walking into the practice rink a couple of years ago and jokingly telling Adam Rippon, her training buddy at the time, that she was so nervous about nationals that she shouldn't even go.

Well, the 25-year-old Bell is having the time of her life at the U.S. Figure Skating Championships.

She landed the triple flip-triple toe loop that had been causing her problems Thursday night, then ramped up the energy inside frigid Bridgestone Arena. By the time Bell spun to a finish, she had Rippon — now one of her coaches — leaping in the air and the masked fans circling the ice standing in ovation at the U.S. Figure Skating Champions.

Bell's score of 75.55 points put her one point ahead of Karen Chen, the 2017 champion and 2018 Olympian, and more than four ahead of two-time national champion Alysa Liu, who is also aiming for her first spot on an Olympic team.

“Adam went to the Olympics and he's like, ‘No, it’s incredible,'” Bell said, “but at the end of the day it's another competition. That's all it is. It's just a matter of keeping things in perspective and staying mature and professional.”

Earlier in the day, Ashley Cain-Gribble and Timothy LeDuc upstaged a brilliant performance by Jessica Calalang and Brian Johnson to take the lead after the pairs short program. Audrey Lu and Misha Mitrofanov are in third place.

"Every day is a new day,” Johnson said. “Go out there, enjoy, have fun and whatever happens, happens.”

She was the silver medalist in 2020 and twice has earned bronze at nationals, but her flawless technical routine and strong performance in Nashville put her in Friday night's free skate with a strong shot at the top step of the podium.

She knew it, too, smiling ear to ear after landing her triple lutz and pumping her fist after her final spin.

“Honestly, I’m just so happy to be here. I’m so fortunate I get to skate in front of people and so much of my family is here,” Bell said. “I had chills. I just feel extremely grateful right now.”

Chen was next on the ice and put together a performance nearly as good. She landed a triple lutz-triple toe loop right at the start, breezed through a double axel and landed a perfect triple loop to score 74.55 for her short program.

Hard to believe it was the same skater who, dragged down by injuries, nearly retired two years ago.

“Just to be able to skate in front of an audience again is super, super fun, and I'm just proud of how I delivered this program,” said Chen, who ditched the short program she used during the Grand Prix season for a revamped version of her 2015 program. “It was definitely a risk to change, but I also knew it was risky to keep a program I wasn't enjoying.”

Meanwhile, the 16-year-old Liu didn't do anything to harm her chances of competing in Beijing next month, though a fall on her opening triple axel left her playing catch-up. She rallied to land her triple lutz-triple toe loop and is well within range of one of the three spots that the U.S. women have for Beijing.

The biggest ovation might have come for crowd favorite Gracie Gold, whose well-known story of overcoming anxiety and an eating disorder has been an inspiration for so many. She buried her face in her hands at the finish to prevent the crowd from seeing what she called her “ugly cry,” but she was all smiles when her sixth-place score of 67.61 was posted.

“I've been doing clean programs in practice, at home. I've been skating really well here and tonight,” Gold said, “so just copy and paste for the free skate tomorrow.”

Cain-Gribble and LeDuc, skating last among the eight teams at Bridgestone Arena, were near-flawless in their pairs program set to music from the 2018 biographical drama film “The White Crow.” It was highlighted by a soaring triple loop and net 79.39 points, a score that would have been third best in the world during the Grand Prix season.

“Without giving away too much of what works for us away, we've prepared in every way possible to be prepared for anything that could happen,” Cain-Gribble said. “We set ourselves up in practice to not be surprised by anything.”

Even the performance of their lives.

“We said at the end, ‘Check that off,’” Cain-Gribble said, “and move forward.”

The U.S. has two pairs spots for the Beijing Games, and one of those could go to defending U.S. champions Alexa Knierim and Brandon Frazier. They were forced withdraw Wednesday night following his positive COVID-19 test, but they plan to petition U.S. Figure Skating for one of the spots based on their exemplary scope of work.

If they are successful, that would leave just one spot up for grabs.

“Every day is a new day,” Johnson said. “Go out there, enjoy, have fun and whatever happens, happens.”