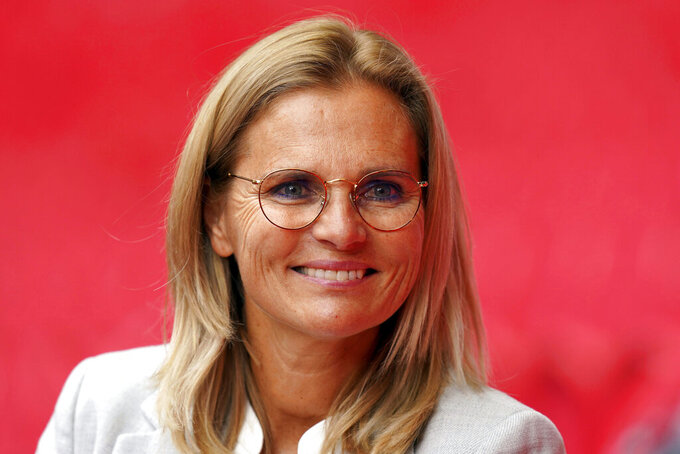 Sarina Wiegman is unveiled as the new England Women head coach at Wembley Stadium, London, Thursday, Sept. 9, 2021. Setting out on her vision as England manager, Sarina Wiegman was sure of one thing — the Women's World Cup should remain every four years. “The Euros are great, the World Cup is great, the Olympics are great so that is three tournaments," she said, pitchside at Webmley Stadium on Thursday. (Adam Davy/PA via AP)

LONDON (AP) — Setting out her vision as England manager, Sarina Wiegman was sure of one thing — the Women's World Cup should remain every four years.

There's no need for FIFA to push through plans to double the frequency of its flagship tournament, according to Weigman.

“The Euros are great, the World Cup is great, the Olympics are great so that is three tournaments," she said, pitchside at Wembley Stadium on Thursday. "I think if you have a World Cup every two years that is too much for the players at the moment so I wouldn’t be cheering for it right now.

Wiegman is taking charge of England after a five-year stint in charge of her native Netherlands that saw her win the Women's European Championship in 2017 and reach the 2019 World Cup final. Jill Ellis, who led the U.S. to victory in that final, is now heading a FIFA technical advisory group that will explore the merits of biennial World Cups. The prospect of more regular World Cups has already been talked up by FIFA Presient Gianni Infantino despite resistance from European football's governing body UEFA.

“It is about visibility," Wiegman said, “but I think also think we need to take care of the well-being of the players and sometimes they need a rest.”

It's taken a year since Wiegman's appointment was announced for her to start with England. Her last game as Netherlands coach was at the Tokyo Olympics in July, a quarterfinal loss to the U.S. on penalties.

The pandemic disruption to the calendar means the Women's European Championship, which England is hosting, now starts in July 2022. Then there's the World Cup in Australia and New Zealand in 2023, followed by the Paris Olympics in 2024 and the Euros in 2025.

“Of course because of COVID we have five tournaments in a row, which is enough," Wiegman said. "At big tournaments you want the best players on the pitch.

“If you look now at the competitions in England there are so many games, Champions League, international players and you play for your club team — you play so many games because you are one of the best, you are a game-changer so when can you have a rest, we should take care of the welfare of the players."

FIFA's plans could ultimately see men's and women's tournaments played every year around June and July. That would prevent women's football having odd-numbered years largely clear currently for its tournaments in a period of growth and trying to attract new audiences.

“You don’t want two tournaments (men and women’s) at the same time," she said, "because people are going to have to choose.”