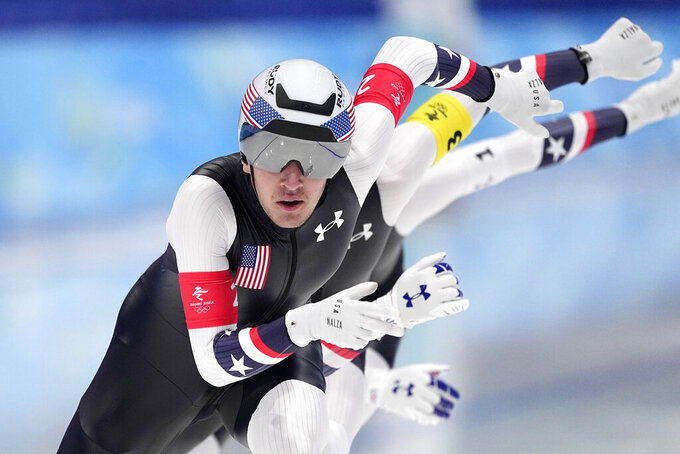 BEIJING (AP) — Japan had another Olympic gold medal in its sights.

Just one turn to go.

Then, the unthinkable happened.

Nana Takagi lost her balance and crashed into the padding at the Beijing speedskating oval coming through the final corner of women's team pursuit, costing the defending champions a second straight gold.

Canada cruised across the line for the improbable victory, while Takagi was reduced to tears by her untimely mistake.

“My mind hasn't recovered from the fall,” she said through an interpreter. “It's hard to me to think or talk about it right now."

Takagi was at the back of a three-skater train and appeared to simply lose her balance.

She got up and finished, more than 11 seconds behind Canada, then collapsed into the arms of one of her teammates, younger sister Miho Takagi.

“I just wanted to be close to her and give her a hug,” Miho Takagi said. “In this event, to fall, we understand the pressure will be on. We cannot turn it around, we cannot change it. That is frustrating.”

The United States won its second speedskating medal of the Beijing Games, claiming the men's bronze and denying Dutch star Sven Kramer a 10th career medal in what is likely his final Olympics.

Norway repeated its run to the gold medal from four years ago, knocking off the Netherlands in the semifinals and the Russian skaters in the final with a time of 3 minutes, 38.07 seconds.

The Russian skaters finished nearly 2 1/2 seconds behind and settled for the silver.

“Of course it’s special to do it again,” said Sverre Lunde Pedersen, the only returning member from the 2018 team pursuit. “It’s with another team, but of course it’s really cool. We showed that our team is the best in the world. It’s amazing."

Even more amazing for Pedersen, who broke his hand last May in a cycling fall and missed the start of the World Cup season.

“I was pretty far down during the summer, but my family kept me going,” he said “After I got better in August, I started training again and the body was still good.”

The U.S. used a unique strategy in which 36-year-old Joey Mantia paces the three skaters for the entire eight-lap race, instead of swapping out the lead position as some teams do.

The American skaters easily defeated the Dutch in the bronze-medal race with a time of 3:38.80, almost 3 seconds ahead.

It was the first time the Netherlands has failed to medal in men's team pursuit since it joined the Olympic program in 2006.

“I feel like the weight has been lifted in a sense,” said Mantia, who is competing in his third Winter Games. “Finally I’m an Olympic medalist and it feels really good. Now I can just kind of breathe.”

Also receiving medals for the Americans were Casey Dawson and Emery Lehman, who skated in the final, and Ethan Cepuran, who took part in the semifinals while Mantia rested.

The U.S. missed out on a chance to go for the gold when the Russian skaters won the second semifinal by just 0.43.

They went almost 4 seconds faster in the semis than they did in the final.

“How unlucky do you gotta be?" Mantia lamented. “The race of their lives. You can't be really sad about that. It's just kind of unlucky."

There was even more drama on the women's side.

In the gold-medal race, Japan led Canada by 0.32 seconds with a half-lap to go, seemingly headed for another Olympic title.

But Nana Takagi stumbled and couldn't recover, sliding helplessly along the ice until she smacked the padding on the outside of the track.

Because the final time isn't recorded until all three skaters cross the line, Canada wound up with a stunning gold.

“We have been chasing Japan for so long,” Canadian skater Isabelle Weidemann said. “We look a lot at their synchronicity. They skate so beautifully together. They look like one perfect unit."

Until Takagi went down on the final turn.

“To be honest, I was in an excellent mood," she said. “I thought I’m going to complete my best skate in the past one and a half weeks, together with my sister.”

Miho Takagi did her best to console her older sibling.

“That skater who falls will feel guilty," she said. "That is why I hugged my sister.”

The bronze went to the Netherlands, which beat the Russian skaters with a trio that included individual gold medalists Ireen Wust and Irene Schouten.

“I’m feeling good, but we hoped for more than bronze,” Wust said. "Japan and Canada do this race really well, so we should be happy.”