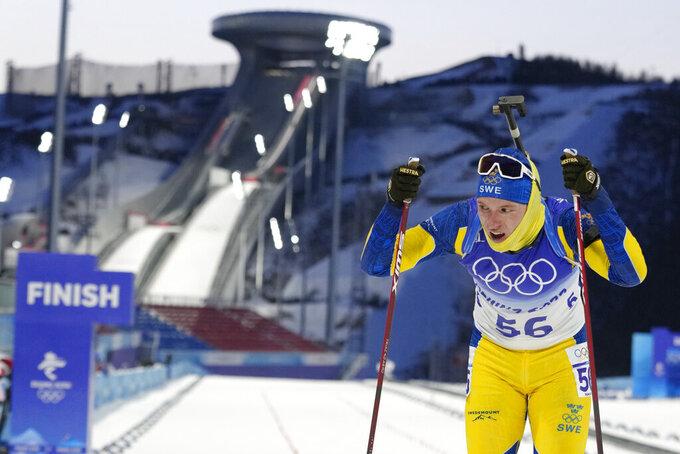 “We are very proud being here, in first place and third place, as brothers,” said Johanes Thingnes Boe, who won his third medal of the Beijing Games. “We are both biathletes but we are also family. We have something between us that is really great. He’s the reason I started in this sport.”

Johannes Thingnes skied fast enough over the 10-kilometer course to overcome a missed target and win in 24 minutes, 0.4 seconds. He also won gold in the mixed team relay and bronze in the individual race.

At the 2018 Pyeongchang Games, Johannes Thingnes also won gold in the individual race.

Quentin Fillon Maillet of France took the silver medal, splitting the brothers on the podium. He finished 25.5 seconds behind Johannes Thingnes Boe.

Tarjei Boe, who also won gold in the mixed relay alongside his younger brother, ended up 38.9 seconds behind with one miss. It was his first individual Olympic medal.

“I’m five years older than him, but we have fought together now for the last 10 years in the World Cup," Tarjei said. “We have done it in the world champs, now we are here winning the mixed relay and also here taking individual medals together. It’s an incredible story.”

Fillon Maillet also missed one target but couldn't match Boe's speed. He won gold in the individual and silver in the mixed relay — out-sprinted by Boe. He's also the overall World Cup leader.

“I am quite happy today," the Frenchman said. "One miss today, but I’m happy to be on the podium. The track is very slow. It’s quite hard on the skis because you must push every time.”

Although the temperatures were relatively warm and the wind was calm, snow earlier in the day made the tracks slow.

Maxim Tsvetkov of the Russian team shot clean but finished 40.6 seconds behind in fourth.

“I already survived fourth place once and the second time around fourth place did not sting me so much," Tsvetkov said. "Besides, today I understood that the favorites will be the guys who ski better on this distance. Even though I skied well in the individual race, today the race was for those guys who feel very strong on the course. And today that’s exactly what happened.”

Boe dominated the sprint races for three seasons but has struggled this year. He won one sprint race in France and was third in another. His success at this year's Olympics make him a favorite for the upcoming pursuit and mass-start races.