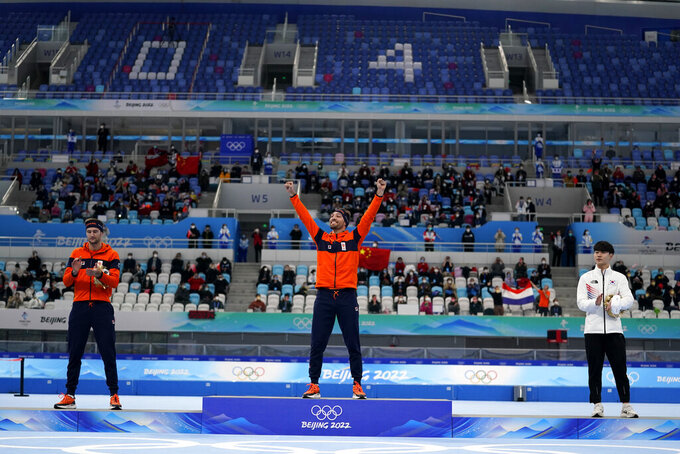 Kjeld Nuis of the Netherlands celebrates during a venue ceremony after winning the gold medal and breaking an Olympic record in the men's speedskating 1,500-meter race at the 2022 Winter Olympics, Tuesday, Feb. 8, 2022, in Beijing. Left is silver medalist Thomas Krol of the Netherlands, and right is bronze medalist Minseok Kim of South Korea. (AP Photo/Ashley Landis)

BEIJING (AP) — Kjeld Nuis saw the record-setting time of his countryman and knew what awaited in his race.

“This is going to hurt,” he mumbled to himself.

It was all worth it.

Nuis became the first speedskater since 1994 to successfully defend his Olympic title in the men’s 1,500 meters, edging Dutch teammate Thomas Krol at the Beijing Games on Tuesday.

Krol, the reigning world champion, broke the 20-year-old Olympic record in his 3 3/4 laps around the Ice Ribbon oval.

Nuis went even faster in the very next pair, crossing the line with a blistering time of 1 minute, 43.21 seconds.

“It was a hard time to beat,” Nuis said. “I knew I could do it. But, still, he's a great skater, and he really pushed himself. It was his best race of the season. And, of course, mine too.”

There were still six skaters to go, but no one came close to the Dutch duo.

Nuis took his country’s third gold in four events in Beijing, while Krol’s runner-up finish of 1:43.55 gave the Netherlands a total of six medals in what is shaping up as another rout for the Big Orange Machine.

“The Dutch team is really peaking at the right moment,” Krol said. “We weren't as good as expected, maybe, in the World Cups at the end of last year. I really think we were always with the Olympics in our minds.”

Krol thought he had done enough to win gold.

“For three minutes, I really thought that would be it,” he said, managing a weak smile.

“That I skated an Olympic record was confirmation that I really skated a good race,” he added. “I did the best I could. I couldn't have gone faster today. I'll just have to admit my defeat. Someone was better today.”

The bronze went to Kim Minseok of South Korea, who was more than a second behind the winner in 1:44.24.

Nuis was inspired by another Dutch skater, Ireen Wüst, who a day earlier won the women's 1,500 to become the first athlete to win individual gold medals at five different Olympics.

The two are teammates on a professional team in the Netherlands.

“It was a crazy thing she did. It was spectacular,” Nuis said. “She said to me, ‘Just stay calm, keep your arms on your back, and win the race.’ And that's what I did.”

The American team again came up short of its first individual Olympic speedskating medal since 2010.

World Cup leader Joey Mantia got off to a strong start but couldn’t hold his pace through a race that requires both speed and endurance. He wound up sixth in 1:45.26.

“The reality is, even if I skated a perfect race, I don’t know if I would’ve beat Kjeld today,” Mantia said. “It’s pretty incredible what he did. It’s nice to know that the gold medal went to somebody who really showed up today.”

Dawson tested positive for COVID-19 three weeks ago and struggled to meet all the strict protocols required by the host country. The team traveled to China without him, with Dawson remaining in Utah to continue his training.

He missed the first race on his schedule, the 5,000, but he finally tested negative enough times to make it to Beijing.

When Dawson touched down in China, he discovered that the airline had lost his luggage. He had to borrow a pair of skates from another athlete and used an extra skinsuit that he brought in his carry-on bag.

Not surprisingly, Dawson finished next-to-last out of 29 competitors, but he still gained the admiration of his fellow skaters just by taking the ice.

“That shows a lot of character,” Cornelius Kersten of Britain said.

While making his way through a series of media interviews in the bowels of the Ice Ribbon, Nuis got a video call from his 5-year-old son, Jax.

The exchange was poignant, epitomizing what the athletes are missing out on at an Olympics that family and friends were barred from attending because of China's strict COVID-19 protocols.

“I think my parents (not being at the Games) is the hardest,” Nuis said. “When you're growing up and every race, when you get on the ice, you scan where they are, just one wink, and it's OK. It's not like that now. It's really hard.”

Nuis held up his phone so his son could say hi to everyone. Jax had watched the race back in the Netherlands and noticed his dad didn't get a medal at the post-race ceremony.

The athletes only receive a panda mascot at the arena; the prize that really matters is awarded later at the medals plaza next to the Bird's Nest.

“He got a medal and he wanted to give it to me,” Nuis related. “He said, ‘Hey dad, you didn’t have a medal, so here's a medal for you.' That was really sweet."