NYC residents should cover face when in public, mayor says 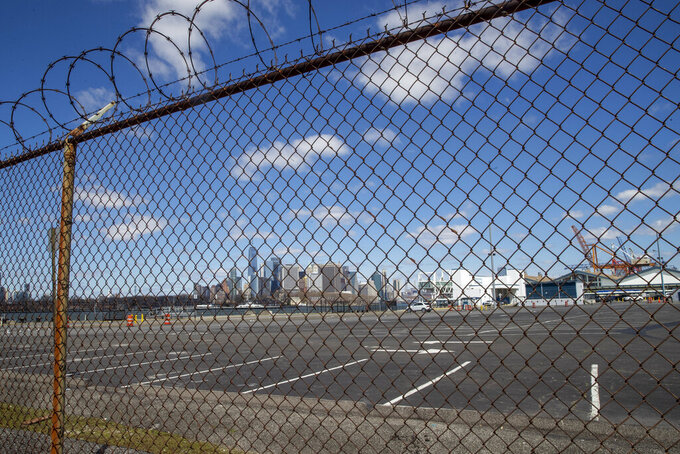 The Manhattan skyline is seen behind the parking lot and terminal of the Brooklyn Cruise Terminal, Thursday, April 2, 2020 in New York. N.Y. New York Gov. Governor Andrew Cuomo announced last week that the terminal with be transformed into a temporary field hospital to increase New York's hospital capacity while cases of the coronavirus skyrocket. (AP Photo/Mary Altaffer)

ALBANY, N.Y. (AP) — As coronavirus cases soared, New York City Mayor Bill De Blasio asked New Yorkers on Thursday to wear a face covering when they go outside to prevent the spread of the virus. Gov. Andrew Cuomo warned that the state’s supply of breathing machines could be exhausted in six days. And the COVID-19 death toll climbed to at least 2,400. While New York City remained a hotspot, there were troublesome trends around the state as the outbreak spread to every county. Unemployment filings skyrocketed too, as the pandemic wreaked economic havoc.

The latest developments in New York:

New York City Mayor Bill De Blasio asked New Yorkers to wear a face covering when they go outside and will be near other people.

He cited research showing asymptomatic people could be spreading the virus without realizing it.

“When you put on that face covering, you’re protecting everyone else,” he said.

The mayor said it could be a scarf or a bandanna or anything homemade, but it should not be a surgical mask needed by medical workers.

A recent study by researchers in Singapore became the latest to estimate that somewhere around 10% of new infections may be sparked by people who carry the virus but have not yet suffered symptoms.

A bandanna might not prevent someone from coming into contact with the virus, but it could help a person who has it not give it to others when the sneeze, cough or breathe.

The mayor of Los Angeles also told everyone in the city to start wearing masks on Wednesday.

Cuomo warned New York could be six days away from exhausting its supply of ventilators as the state reported 432 deaths in the past 24 hours, bringing the death toll to nearly 2,400.

More than 13,300 people were hospitalized statewide with about 3,400 in intensive care.

Ventilators have become the crucial piece of equipment sought by state and city officials as hundreds of patients a day are admitted to intensive care units.

The state sent 400 ventilators to New York City and another 200 to its suburbs. But the governor saw problems ahead.

“At the current burn rate, we have about six days of ventilators in our stockpile,” the governor said at a briefing at the Capitol.

If supplies run short, the state is ready to use anesthesia and converted BiPAP machines, usually used to treat sleep apnea, or put more than one patient on a single ventilator.

More than 92,000 state residents have tested positive for the coronavirus. The true number is likely much higher because officials have rationed tests and encouraged all but the most seriously ill people not to seek treatment and instead ride it out at home.

Most people who get the virus experience mild or moderate symptoms, including fever and cough. Others, though, develop pneumonia, sometimes requiring hospitalization. The risk of death is greater for older adults and people with other health problems.

More than 464,000 people have filed for unemployment in New York state in the three weeks since the pandemic shattered the economy, an increase of over 1,000% from the same period last year, according to the state Department of Labor.

Last week alone, more than 369,000 unemployment claims were filed, an increase of more than 2,600% from the same time last year.

The Department of Labor’s unemployment filing system has seen a 16,000% increase in phone calls and a nearly 900% increase in web traffic in recent weeks.

Cases have now been confirmed in every county, with worrisome trends in some regions.

At the other end of the state, Buffalo and surrounding Erie County reporting 19 deaths and about 730 cases as of Thursday.

Among those infected in Buffalo is Common Council President Darius Pridgen, along with three of his adult children. His daughter was taken off a ventilator late Wednesday and began breathing on her own just before Pridgen went live on Facebook to offer an update from his own quarantine, frequently coughing and his voice hoarse.

“It was pretty rough for a couple of days,” he said of his daughter.

Erie County Executive Mark Poloncarz said the Buffalo Niagara Convention Center could be used as an intensive-care hospital if needed during the projected peak in late April or early May.

Sandra Santos-Vizcaino, who taught third grade at an elementary school in Brooklyn, is the first New York City school teacher reported to have died of COVID-19.

“This is a devastating tragedy,” schools Chancellor Richard Carranza said Thursday. “Sandra was a beloved teacher at P.S. 9.”

Santos-Vizcaino, 54, was a more than 20-year veteran of the city’s school system. She was recognized for her contributions to education in the Dominican Republic and won a grant to study bird sanctuaries there in 2009.

Brooklyn principal Dez-Ann Romain was the first city education employee reported to have died of the virus.

Students in New York City haven't been to school since March 13.

Administrators of the state prison system said they will allow guards to wear masks on duty. Staff had been prohibited from wearing masks unless medically necessary.

Also, inmates subject to quarantine will be issued a surgical-type mask to further reduce the risk of any secondary transmission, officials said.

The state corrections department said Thursday that 176 employees and 24 inmates have had confirmed cases of COVID-19.

The virus hasn't spared any part of New York City, but new data shows that a few poorer neighborhoods in Queens, the Bronx and Brooklyn are getting hit especially hard.

New York state is racing to roughly triple its hospital capacity as coronavirus cases surge. Officials worry the massive effort won't be enough in the U.S. epicenter of the pandemic.

Associated Press writers Carolyn Thompson in Buffalo and Mary Esch in Albany contributed to this report.