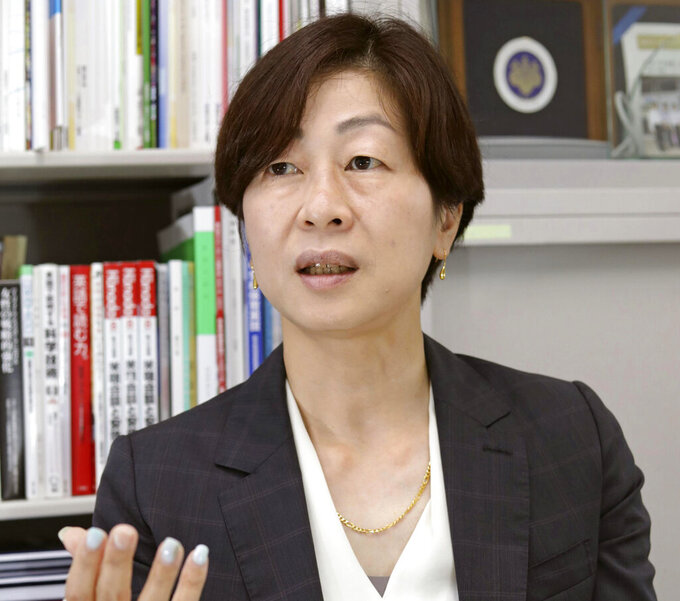 TOKYO (AP) — Tokyo has been “cornered” into holding the games during the coronavirus pandemic, one of Japan’s best-known Olympians and an executive member of the Japanese Olympic Committee said in an outspoken editorial published Friday.

Kaori Yamaguchi said the International Olympic Committee, the government and local organizers are ignoring widespread opposition to the games from the Japanese public.

Depending on how the question is phrased in different polls, between 50-80% of Japanese people oppose holding the Olympics.

“We have been cornered into a situation where we cannot even stop now. We are damned if we do, and damned if we do not,” Yamaguchi wrote in an editorial published by Japan's Kyodo news agency. “The IOC also seems to think that public opinion in Japan is not important.”

Yamaguchi won a bronze medal in judo at the 1988 Seoul Olympics and is also a former world champion. She teaches at the University of Tsukuba.

“What will these Olympics be for, and for whom?" she asked. “The games have already lost meaning and are being held just for the sake of them. I believe we have already missed the opportunity to cancel.”

Japan has officially spent $15.4 billion to organize the Tokyo Olympics, and government audits say it may be twice that.

The Switzerland-based IOC derives almost 75% of its income from selling broadcast rights. Its income has been stalled since the one-year postponement of the Tokyo Olympics, and estimates suggest it could lose $3 billion-$4 billion in broadcast income if the games were canceled.

Fans from abroad have already been banned for the Tokyo Olympics.

In her weekly briefing on Friday, organizing committee president Seiko Hashimoto said organizers would follow government guidance on having any local fans. That decision was expected on June 20 when the current state of emergency in Tokyo expires.

Kengo Sakurada, head of the association of corporate executives in Japan, said Thursday that no fans should be allowed.

“Many people are feeling extremely uneasy about the safety of holding the Olympics,” he said. “Even if the infections slowed, no fans should be the rule.”

Hashimoto was asked if the Olympics were 100% certain to take place. The IOC and organizers have said they will and venues are now being set up for the Olympics to open on July 23.

IOC vice president John Coates said several weeks ago that the Olympics would go ahead if there were a state of emergency.

“Whether it’s 100% or not, well, I have been receiving this question many times," Hashimoto said. "If the IOC judges, and the Tokyo Metropolitan Government judges, that it is difficult, then it is also our mission to respond to such judgment."

She also said that the visit by IOC President Thomas Bach, which was announced for July 12 by Coates, was now uncertain.

“Nothing is decided,” she said.

Bach's scheduled visit to Hiroshima in May was called off because many parts Japan were under a state of emergency.

The IOC's plan is to get 15,000 Olympic and Paralympic athletes from more than 200 countries and territories into Tokyo, sequester them in a bubble at the Olympic Village, let them compete and then get them out of Japan within two days of their finish.

Tens of thousands of others will also enter: coaches, judges, officials, broadcasters, media and members of the so-called Olympic Family.

“Sports we know is one big industry now,” Hashimoto said. “But even with these industrialized games, there are athletes, pure athletes out there who have been doing everything to prepare for these games. For us, providing an arena for these athletes to show what they have been doing is also another mission of the Tokyo Olympics."

Dr. Shigeru Omi, a top medical adviser for the Japanese government and a former World Health Organization regional director, is putting Primer Minister Yoshihide Suga under increasing pressure to explain why the Olympics should take place.

Speaking in a parliamentary session on Thursday, he said “holding the games in the middle of the pandemic is abnormal.” On Friday, also in parliament, he said holding the Olympics if there were still a state of emergency in place “should be avoided.”

“It is crucial that we must not let the Olympics trigger a flow of people," Omi said Friday.

Japan has attributed about 13,000 deaths to COVID-19, and less than 3% of the population has been fully vaccinated in a very slow rollout.